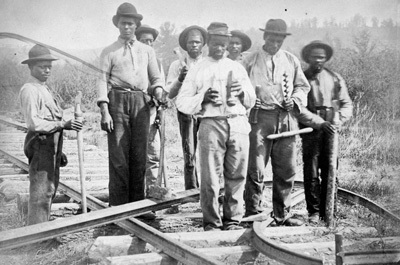 Congress legislated The Militia Act on July 18, 1862. This act allowed African Americans to join the war effort as laborers and soldiers declaring, “That the President be, and he is hereby, authorized to receive into the service of the United States, for the purpose of constructing entrenchments, or performing camp service or any other labor, or any military or naval service for which they may be found competent, persons of African descent, and such persons shall be enrolled and organized under such regulations, not inconsistent with the Constitution and laws, as the President may prescribe.” However, it was not passed in its entirety on this date; there were concessions made to their right to enlist. As of July 18th African American men were able to aid in the war effort by serving as laborers, carrying out jobs such as digging ditches, constructing campsites, cooking and preparing rations, and other non-combat roles; but the ability to enlist as a soldier was not granted. It would not be until the Emancipation Proclamation the following year that this other half of the Act would be enforced.

Although the Militia Act was passed once before, during the American Revolution, there was a great deal of resistance in permitting the formation of African American regiments during the Civil War. The New Paltz Times article published on August 8, 1862 hashed out the particulars of the law: “The President argued that the nation could not afford to lose Kentucky at this crisis, and gave it usable opinion that to arm the negroes would turn 50,000 baronets from the loyal Border States against us that were for us.” Congress neither pushed for the entire act to go into effect nor actively prevented it. The basis of this resolution as explained by the newspaper came from this risk of the Union losing a defense vital to their success in the war. Unfortunately for African Americans, it meant waiting six more months to finally have a hand in the fight for their own emancipation.

Other reasons for this opposition were that other regiments did not want to serve with African Americans and did not believe that they were capable of engaging in active combat. Although the Union was fighting for the abolition of slavery, there was clear and present racism within the Union itself. Some critics opposed the original motion to exempt African Americans from enlisting as soldiers. A contributor of the New Paltz times expressed their contempt for the exception of African Americans into the military. The writer called to address but did not fully understand the implications of this exemption of African Americans’ asserting, “See the company he is in. Those who are exempt from the draft are Students, Teachers, Ministers and Negroes! Why they are getting up in the world.” This writer interpreted the exemption as a form of special treatment and privilege, however, it further deprived African Americans from equality and the opportunity to defend.