The Collapse of the Church 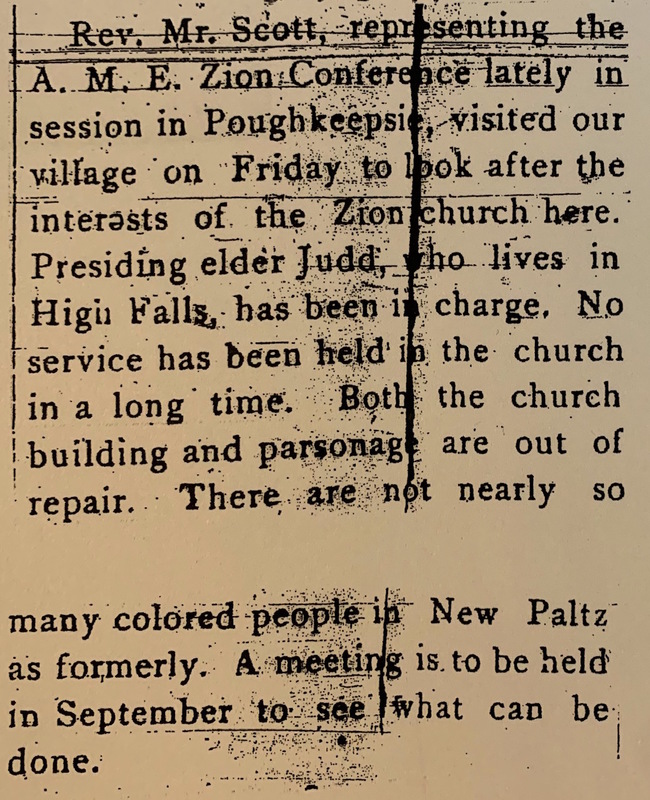 The New Paltz AME Zion Church was established in 1871, after the leading members of the clergy were provided the land by Edmund Eltinge, an influential man of the New Paltz community. It was assumed that Eltinge donated the land for free, since a local New Paltz newspaper stated that Elting had donated the land, yet, later newspapers mentioned how the church had to repay him. Eltinge did give them the land that they were able to build their church on, but there was a price attached to it. The debt in which they acquired for purchasing the land plot was $550. This was the debt of the land itself, a 23ft by 32ft plot of land. The AME Zion New Paltz congregation would increase this debt when they enlisted the services of Alex Bedford, a carpenter who would help build the church for $573. After heavy analysis, it is becoming clearer that the debt is what made the church gradually lose its presence. The church was able to put a considerable dent in what they owed to Eltinge, but there is not enough information to determine whether or not they paid off Bedford’s services. What should be also realized is that this debt did not exist in a vacuum. The church itself frequently held events trying to pay off the debt for multiple decades, usually charging 10 to 15 cents for admission to ice cream socials, holiday parties, picnics, love feasts, etc. Having to charge for admission to social events and celebrations, more so than other local houses of worship in the town, demonstrates how burdened the church was. The church would also struggle to pay the services of the reverends who attended the church and led the congregation in prayer. It is noted that at least two separate reverends, Reverend Anthony Jackson and Reverend Ross, had issues with the church not being able to pay them for their services.

When analyzing the elements of other land plots sold by Etlinge, there appears to be a contrast between the church’s purchase and others in the community. Compared to other Eltinge land transactions during the latter half of the 19th century, the AME Zion Church’s land purchase was not equivalent. The 23 by 32ft plot of land purchased by the church is less than an acre, so the price in theory should represent the amount of land. Edmund Eltinge was an influential person in New Paltz, owning lots of land that he would occasionally sell to various individuals. Before selling the 23ft by 32ft plot to the AME Zion Church, he sold seven acres to a John F. Stokes for $1,100 in 1870. On a first glance, the price Stokes paid for his seven acres is higher than the plot the church bought. This makes sense until you factor in the size of the plot the church bought. An acre is 66ft by 600 ft, which is 43,560 square feet. Stokes’ purchase was 304,920 square feet. The church land plot is 736 square feet. This extremely stark difference in volume shows the contrast in which the AME Zion Church community was charged with paying back a debt that in no way should represent the amount of land they purchased. The church community was charged with $550, while Stokes paid double that but received over 400 times the amount of land! Paying off over the $550 they owed Eltinge is difficult but even more difficult when you realize that African Americans during this time period were usually blocked from accessing high paying jobs. Additionally, it appears when compared to its sister churches in Kingston and Poughkeepsie, the New Paltz congregation was smaller. By the early 1880s, the congregation was able to pay off about half of what they owed to Edmund Eltinge, but due to struggling financial woes, it is assumed that they were unable to pay the rest of the debt. They owed Edmund Eltinge $550. They were able to pay off $337.55 after a little over a decade of operating in the New Paltz community but they still had $212.45 to pay off to Eltinge. There is no indication that they were able to pay off this debt as there is no published information or mention of finally paying off the debt they owed. In fact, as the years went on, the financial troubles would continue for the church as it had trouble paying its ministers. Having a debt is a weight on the amount of money you are able to generate, but it is important to remember that while reverends are men and women of faith, they still need to receive a fair pay as well. Reverends Ross and Anthony Jackson both claimed that the church did not compensate them for their weekly services with Ross claiming that the church owed him $100 dollars. Having to pay off the land debt, wages for reverends, construction/repair costs, possible costs for supplies, bibles, etc., means that whatever money they are able to receive from their community has to go to a lot of places. It seems reasonable to assume that they were able to pay off over half their debt to Mr Elting in the first decade of their operation because the community surrounding the church was still big enough.

While the transaction between the New Paltz AME Church and Eltinge paints a sour picture with how the church picked up a debt they probably could never timely pay off, Eltinge did seem to be accommodating to people in certain cases. Reverend Charles R. Moody, a major clergyman of the New Paltz AME Church, purchased three whole acres of land in 1885. These acres were located next to land Moody already owned. Moody agreed to pay Eltinge $560 for the whole three acres. Since one acre is 43,560 square feet, Moody’s newly acquired land would total to 130,680 square feet. When analyzing this transaction, and dividing the total payment into thirds to match each acre, Moody paid roughly $187 for each acre. This a much more considerable deal than the purchase of the New Paltz church land plot as Moody paid roughly the same amount but got roughly 178 times the amount of land. 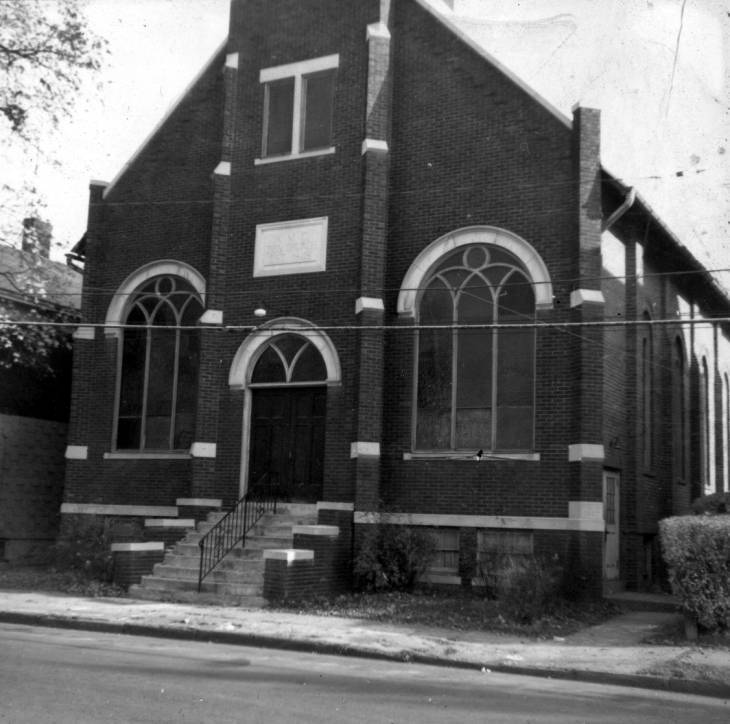 At the dawn of the 20th century, Reverend Charles Moody issued a prediction in one of his sermons that would come true in time. In 1901, he predicted that due to the struggling financial status of his church and its gradual decline, the New Paltz AME Zion Church would be overshadowed by the nearby Kingston and Poughkeepsie churches. Both of these churches were located geographically nearby, with the Kingston church also being located in Ulster County. The Kingston church and the Poughkeepsie church still exist to this day. These churches may have slightly moved locations or have gone under repairs changing a significant portion of their buildings, the communities that follow these churches are still active to this day. While it is fortunate that these communities that follow these churches have survived and endured for over a century, it is unfortunate that the New Paltz AME Zion Church community could not share their respective success. While Moody might not have known exactly how the church would end, he did know that after 30 years of operation that the New Paltz church was on a downward trajectory. A decade after Moody’s prediction, the current clergy and parish of the church could sense that the church would not be able to sustain itself throughout the 1910s. In 1911, the New Paltz Independent reported the New Paltz AME Zion church was considering sending its parish to other nearby churches that would accept or were operated by African-Americans. These churches would most likely include the nearby Kingston church and Poughkeepsie church as Moody recognized those churches as sister locations despite the fact that these churches were overshadowing the New Paltz church. The New Paltz church was located by the Wallkill Railroad that went directly to Kingston, so members of the church could have gone there. The Poughkeepsie church is only 12 miles east of the New Paltz church as well, being right across the Hudson River. In 1915, the New Paltz Independent reported that the church was informally closed due to declining attendance. The closure of the church is a tragedy as a church’s community has dozens of stories of its practitioners' experiences and tales. With the disappearance of the community, stories that might have been preserved and retold to future generations have been forgotten and obscured. While the church was in some use after 1915, it was never officially back in business and the community that once organized there still disappeared. The church building was eventually renovated in 1928 and a separate church group, the Church of the Nazarene, provided services for its congregants for several years. The building was demolished in May of 1945.