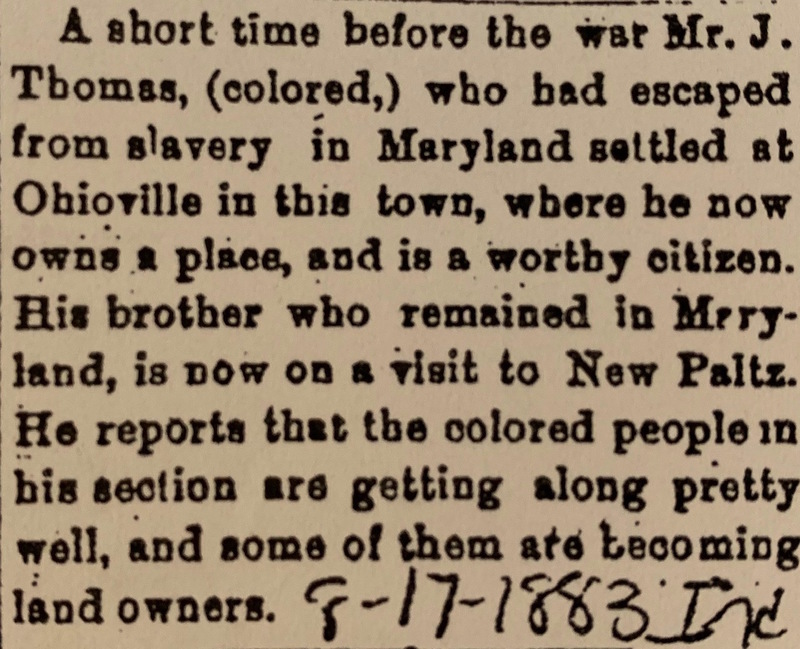 James Thomas (originally named Benjamin Sands) was born into slavery c. 1823 near Georgetown, Maryland. Throughout his early years, James was sold and then transported to different plantations throughout Maryland. At the age of 25, James and his siblings, Eliza and William, were set to be sold to a plantation in Georgia. This prompted James to seek his freedom and escape slavery. After bidding his family goodbye, James left on his journey to the North. While traveling, James faced harsh winter weather. He developed problems with his feet that lasted most of his life. After months of travel, James finally reached Pennsylvania. There, James met a dairy farmer and stayed with him for several days. After leaving the farm, James tried unsuccessfully to board a train from Harrisburg, Pennsylvania to Philadelphia. James could not pay for the ticket with only $4.00 on hand. James painfully walked the entire way to Philadelphia. When James arrived in Philadelphia he spent his first night in the “watch house” with a prisoner, again not having the money for lodging. He described this experience as unpleasant. While in Philadelphia, James found work in a brickyard, earning enough money to travel to New York. James arrived in Poughkeepsie, New York, where he crossed the Hudson River and traveled six miles to New Paltz.

James never stopped being fearful of being returned to slavery until after President Lincoln’s proclamation freeing the slaves. He knew if be was caught, the 1850 Fugitive Slave Law could send him back South to a life in bondage. After his long journey, crossing several states, James found employment in New Paltz working on Cornelius LeFevre’s farm. James kept his secret from Cornelius and when asked said he came from New Jersey. Living in New Paltz was the first time that James felt secure. After working for Cornelius LeFevre, James spent three years working for John L. DuBois at Libertyville. John’s children actually taught James the alphabet and how to spell.

James eventually married a woman named Persillah (possibly also born in Maryland) and purchased land and built a house in New Paltz and the hamlet of Ohioville. The Thomas’ had seven children: Lucinda, Abraham (died young), James Jr., George, Demont, Culbert and Tilman. Demont died in Ohioville at the age of 12. James lost his wife, Persillah, who died on November 14, 1870 in New Paltz. According to her obituary, listed in the New Paltz Independent, Persillah died due to palsy at the age of 53. James later remarried a woman named Elizabeth. James’ son, James Jr., moved to Mount Pleasant, Westchester County, marrying a woman named Catherine. He was listed as an expressman on the 1900 Federal Census. The couple had five children, sadly losing four before they reached adulthood. Claudy died on July 8th,1884 at the age of two. Claudy’s obituary was listed in the New Paltz Independent, Florence, born c. 1894 appears to have been their only surviving offspring.

While living in New Paltz, James Thomas farmed onions and other crops. In a “Productions of Agriculture in New Paltz” document from June 1880, James Thomas is listed as a farmer within the town. He was the owner of his farm which was worth approximately $700. His machinery was worth around $50 and his livestock was worth about $121. The estimated value of all farm productions from 1879 was $200. James owned one mowed acre and one non-mowed acre. In 1879, Thomas’ farm had nine poultry birds, one horse, one milch cow, two swine, and one calf. His farm produced 68 eggs, 75 butter, 90 bushels of Irish potatoes, 12 bushels of apples, and 1300 grapes. James would eventually play a role in the history of the New Paltz AME Zion Church. On August 3rd, 1881, James is mentioned in the New Paltz Times as being elected a trustee of the church, a prestigious position.

James eventually revealed his secret, with details of his escape of slavery posted in an article in the 1888 edition of the New Paltz Independent

Following the close of the Civil War, James returned to the South to locate his mother. He found her alive as well as several siblings. James had never heard what had happened to his siblings, Eliza and William, who were sold and sent to Georgia. James and his mother visited each other many times following this first visit after the Civil War. In the winter of 1888, James went to Maryland to visit his mother but she had died just three weeks prior to his arrival. During the 1888 trip, James noticed many changes in the South. When he visited his old plantation he was saddened by the changes that had occurred. The plantation was populated by all newcomers. Other changes had happened over the past forty years. A change that James was happy to see was that hearses were now used for all classes and races. When his grandmother died fifty years prior she was brought to the cemetery in a cart.

After escaping slavery, James Thomas lived a free life in the the North for forty-seven years. An article in the October 1893 edition of the New Paltz Independent states that James was ill for several weeks after receiving a stroke of paralysis. James Thomas died on October 10th, 1893. His final will was filed in the same month by his son Tillman Thomas. According to the New Paltz Independent in November 1893, George inherited a sum of cash. Elizabeth, his widow, was left his real estate and furniture. After Elizaebeth died, his son James Thomas Jr., was to have one third of the property and certain articles of furniture. Tillman Thomas was named his executor.