The majority of information about Fulton Cox and his wife, Jane, was taken from the local newspapers, either the New Paltz Times (NPT) or the New Paltz Independent (NPI).

Fulton Cox was a primary figure in the creation of the A.M.E. Zion Church. His exact date of birth is unknown, although the 1870 Federal Census lists him as being born c. 1825.

Based on the primary information we have, there is a discrepancy on where Fulton was born. The 1868 NPT article states that, “Fulton Cox, [was] a Freedman from Oglethorpe Co., Georgia...” Meanwhile, the census records state that he born in South Carolina. His wife, Jane Cox, was born in Virginia. Despite this confusion, we do know about Fulton Cox’s life in New Paltz. He was brought to New Paltz by Civil War Captain Peter Eltinge after the close of the Civil War in 1865. In a letter dated, October 10, 1865, found in the Eltinge/Lloyd Collection at Duke University Archives, Peter mentions bringing a Black man with him to New Paltz.

“I am going to bring a first class darky servant with me when I come home. Perhaps you will want to hire him."

In 1868, Fulton and his wife purchased a home from the Edmund Eltinge for $400 on Pencil Hill Rd, directly across the street from the future location of the A.M.E. Zion Church. At the time, his property was considered to have the largest vineyard in all of New Paltz. Fulton had a small business running while working for Edmund Eltinge and was elected as the town’s roadmaster. 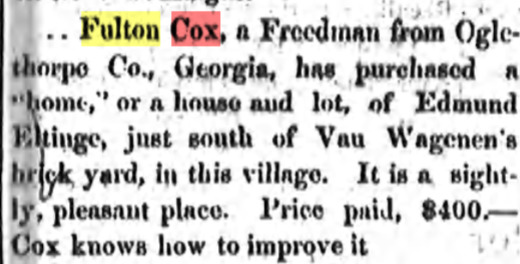 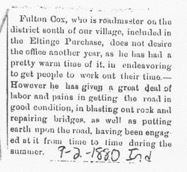 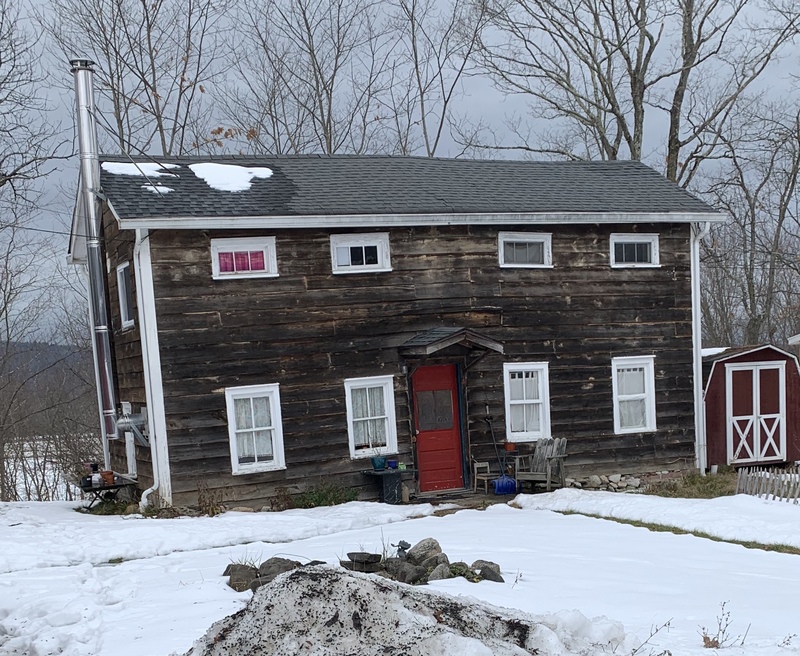 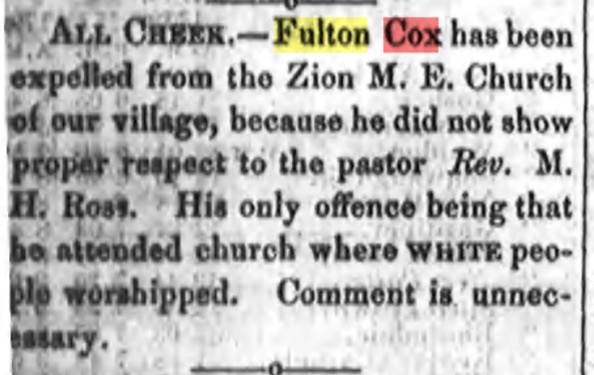 In 1888, Fulton Cox died in a violent carriage accident.

Fulton Cox, (a colored man who came North with the late Capt. Peter Eltinge,) met with a serious accident on Wednesday of last week. He was driving home with a horse and wagon at the time. The wagon was loaded with wood, barrels, etc. On the top of a barrel he placed a fruit crate, upon which he took a seat, and just as he turned into the street leading to his residence, he fell off the seat, (no one knows whether by accident or a fit) striking the ground behind the horse. He was discovered lying there by Mrs. Kate Minerly, who heard him groan. She pulled him away from the horses feet after which she summoned assistance. Mr. Cox was carried to his residence when it was found that his back had been broken and the whole of his body below the injury was paralyzed. The village physicians and neighbors gave him every attention. 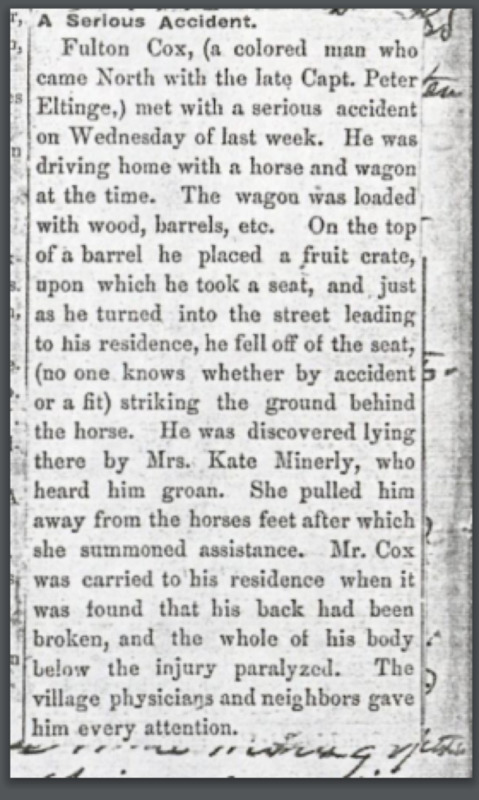 Prior to Fulton's death, he wrote a will with three provisions. The third provision is the one that is most interesting. He explicitly wrote that after his and Jane's death his property should be sold and $500 should be given to the Methodist Church and NOT the A.M.E. Zion Church. This news was made public after Jane Cox’s death in 1893 due to a head injury.

Excerpt from the will of Fulton Cox, probated~1888 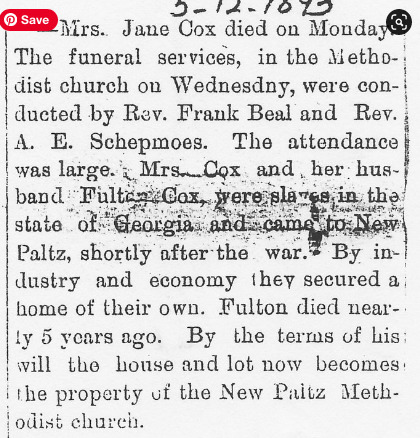 In March 1893, five years after the death of her husband, Jane Cox died. In observing the provisions of her husband's will, " the house and the property, now belong to the New Paltz Methodist church."

In May of 1911, the New Paltz Independent published a piece titled, “Christian Charity and Courtesy,” in which it states, “.. if the A.M.E. Zion Church were closed, its ministers sent to some larger field of usefulness, and its little congregation taken to the other churches, where they were always welcome, before the Zion church was built, and where the Methodist Church has shown by its marble tablet to Fulton Cox, that its principal financial benefactor has been a colored man” (NPI 1911). 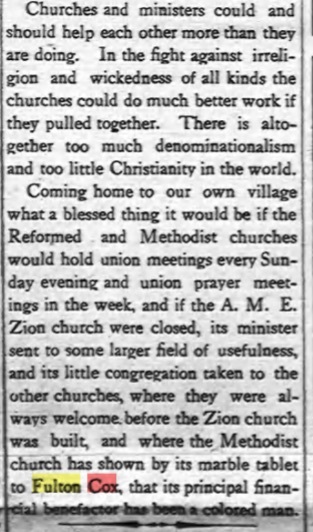 During the fall of 2020, Church historian, Anna Bates, was able to locate the marble tablet mentioned in the article in the attic of the Methodist Church. Also discovered was a ledger, bearing the dates that Fulton became a member of the churrch. There is no mention of Jane becomming a member.

From enslavement in the South, helping create a Black church, traveling to Washington DC to witness the inauguration of two Presidents, elected as a town roadmaster, being a respected member of the New Paltz community and congregant of the almost entirely white Methodist church, Fulton Cox led a most amazing life. His sudden change in joining the Methodist Church and leaving his entire inheritance to it is still a mystery. Nonetheless, Fulton Cox’s life story is very instrumental in piecing together the untold Black history of New Paltz. 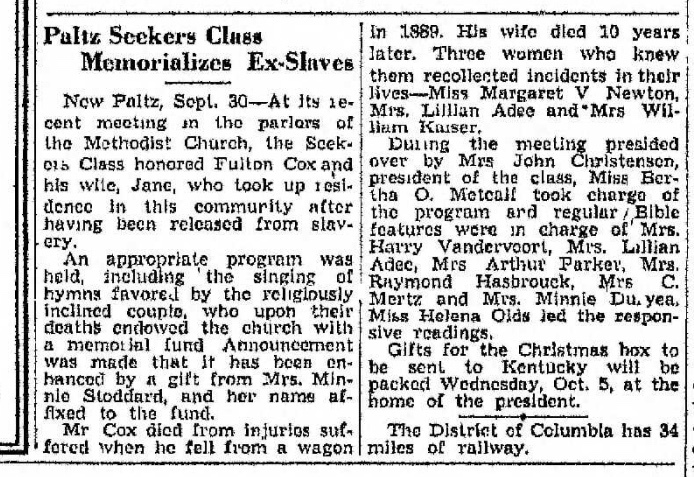 The last we hear about Fulton and Jane Cox is a newspaper clipping in the Kingston Freeman.