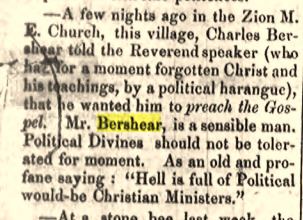 Charles Bershear was most probably born in Maryland sometime around 1838. It is not known what date he actually emigrated from the South, but the first mention of Charles living in Ulster County is a U.S. Dutch Reformed Church marriage record from May 21,1863. The record lists Charles marrying, Malinda Rose Banks, in Libertyville at the Guilford Church on May 21, 1863. Malinda was previously married to George W Banks. George died in 1851 at the age of 27, leaving Malinda a young widow with two children to raise on her own; George W Banks, Jr. and Anna Banks. In 1855, Malinda, George Jr. and Anna were lving with Malinda's brother, Samuel Rosa (Rose) and his family in New Paltz.

Charles first appeared on a federal census record in 1865. He was listed as living with his wife Malinda, step-daughter Anna Banks, and new born daughter Hannah Bershear. The 1865 census record stated that Charles and his family were also not taxed. An August 26th, 1869 New Paltz Times (NPI) article mentions that Charles Bershear as well as other residents of New Paltz began raising money through a picnic to begin construction of the New Paltz AME Zion Church.

Following the construction and dedication of the New Paltz AME Zion Church, Charles Bershear remained an active member of the church throughout his life. According to the (NPT) on November 30th, 1871, Charles Bershear was so upset about the nature of the church sermon that he actually told the reverend to teach the gospel, and not politics!

The 1870 census lists Charles Bershear, Malinda Rose Banks Bershear, and Hannah Jane Bershear living together with Lewis Dubois, a farm laborer. Charles was also listed as a farm laborer. His place of birth was listed as Maryland. It is also noted in the census record that Charles could not write. On February 6th, 1879 (NPT), Charles Bershear was mentioned as having held a sociable for the New Paltz AME Zion Church at his home. By 1880, the federal census lists Charles living in the Hamlet of Put Corners with Malinda Rose Banks, his wife, and daughter Hannah Bershear. In 1893, Charles and Malinda opened their doors to a local well respected woman of color, 93 year old Judy Jackson.

In November of 1885, Charles Bershear travelled to Washington, D.C.. New Paltz resident Charles Freer watched over his home until spring when Charles returned home. At that time he was listed as being employed as a fruit farmer. 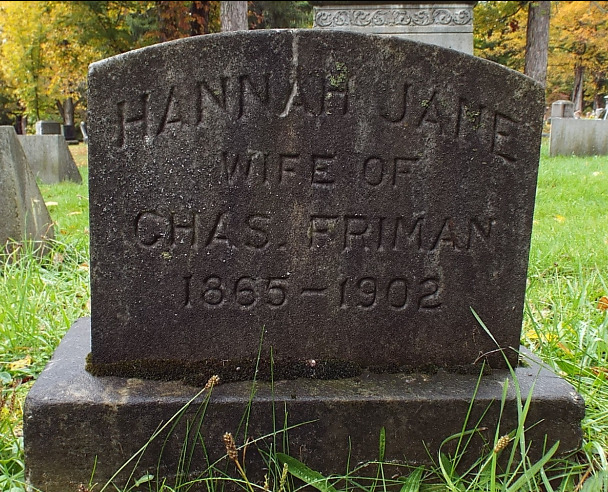 By 1900, Charles and Malinda were listed as still living on Put Corners. His birth place was changed from Maryland to New York. He was still listed as a farmer and the census stated that he owned his own home and farm with no mortgage. He was then listed as able to read and write.

According to the 1906 Kingston City Directory, Charles and wife, Malinda Rose Banks Bershear were living apart. Malinda was living with her son George W Banks Jr at 83 Franklin St, Kingston. George was emplyed as a butler at 41 Pearl Street.

Charles Bershear continued living apart from his wife according to the 1910 federal census. His birthplace was once again listed as Maryland. His parents were listed as being born in Virginia and his occupation was still listed as farming. 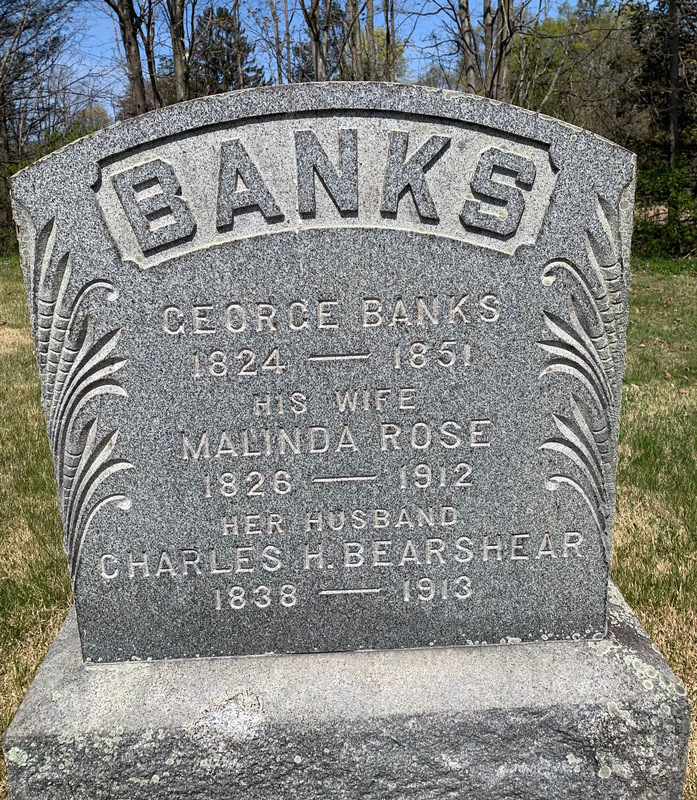 Malinda Banks Bershear died on July 12, 1912. Her obituary in the Kingston Freeman stated the following:

Mrs. Malinda Bershear died Sunday morning at two o'clock at the home of her son, George W. Banks, 83 Franklin street, aged 88 years. She is survived by one son, George W. Banks and one daughter, Anna Banks, of this city. The funeral will be held from the residence of her son, Tuesday morning at 11 o'clock. The body will be taken to New Paltz on the 12:10 Wallkill Valley train for interment.

Charles Bershear died just four months after the death of his wife on December 17, 1912 in New Paltz and is buried by her side. Malinda's first husband, George Banks, is also buried next to her in the New Paltz Rural Cemetery. The plot was paid for by their son, George Banks, Jr.