In 1898, in a state of depression and some disillusionment, Lucy Maynard Salmon applied for and was granted a sabbatical.  She spent the first summer in Paris, where Adelaide Underhill joined her.  The correspondence that followed this time and continued throughout Salmon’s two year sabbatical bears evidence of their deepening emotional bond and love for each other. 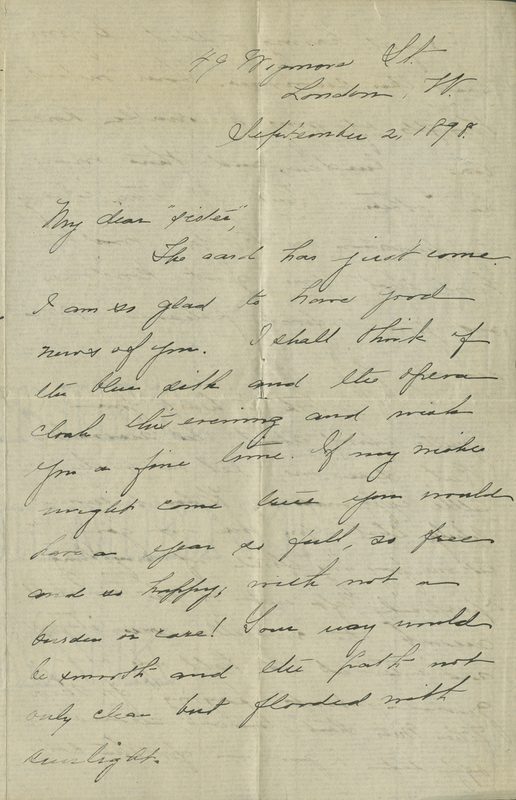 In this letter, after spending the summer with LMS in Paris, AU addresses her for the first time as “sister.” The use of the sororal metaphor between two women friends in the 19th century was an indication of commitment and created kinship and “a framework within which women might share intimacy and passion with other women" (Lasser, p. 164; see Bibliography).  AU’s explanation of the way she had handled the accounting for expenses for their household also indicates the degree to which LMS had insisted on taking financial responsibility for AU, despite her protestations. 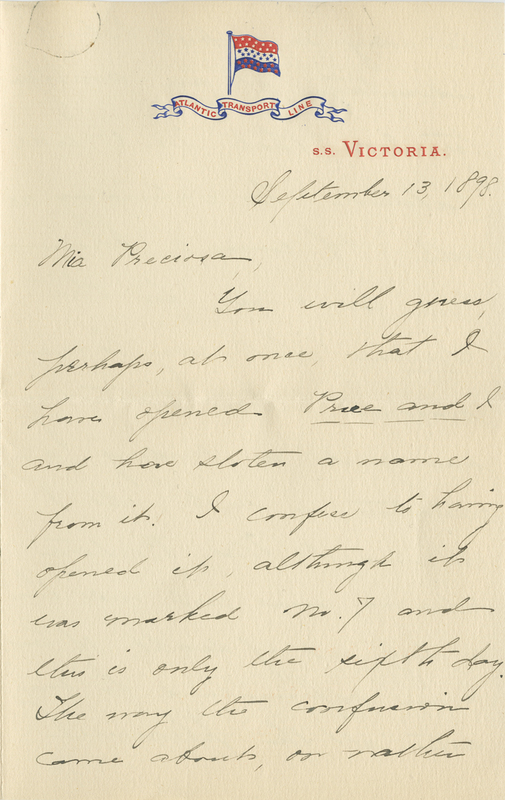 Underhill wrote to Salmon en route back to Vassar.  She closes her letter, “I hope you can remember the summer with pleasure.  For me it was happy because I was with you.  Happiness and good fortune go with you! is my wish.”  They would not see each other again for two years. 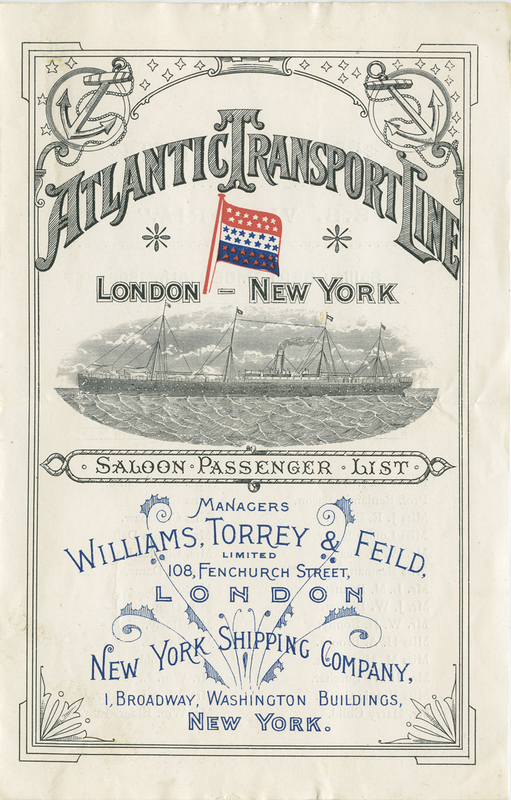 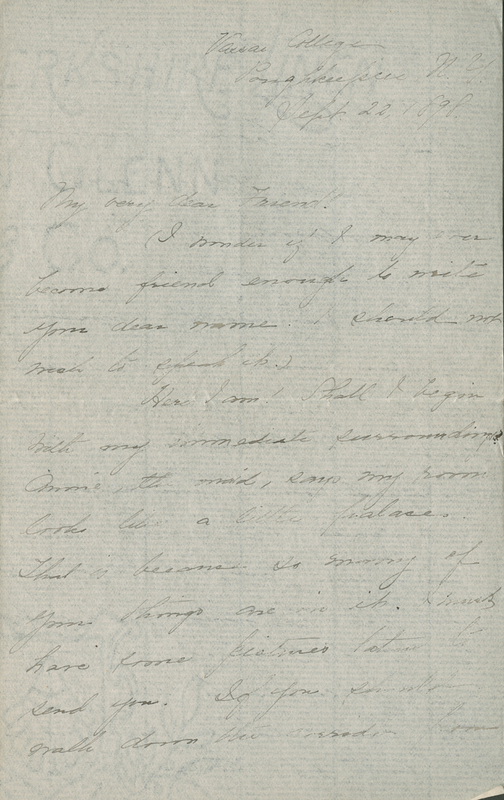 Underhill updates Salmon on the new semester underway at Vassar and closes, “How I should like to be there with you or in the Channel Islands or in some other delightful spot!  I wish I could help you play and then I wish I could help you work.  Please please do not work too hard.  Do allow yourself some perfect relaxation from the strain of work.  The rest may do you more good than the work!” 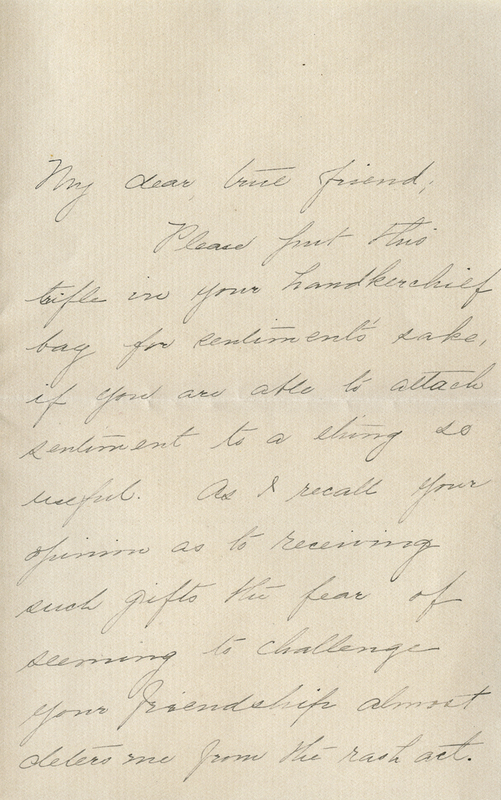 Please put this trifle in your handkerchief bag for sentiment's sake, if you are able to attach sentiment to a thing so useful. As I recall your opinion as to receiving such gifts the fear of seeming to challenge your friendship almost deters me from the rash act.

But you will forgive me in the end, I think.

If thoughts travel, here is a test, you know how often I think of you and how much I wish all good things for you.

The Eternal Love that is round about us keep you! 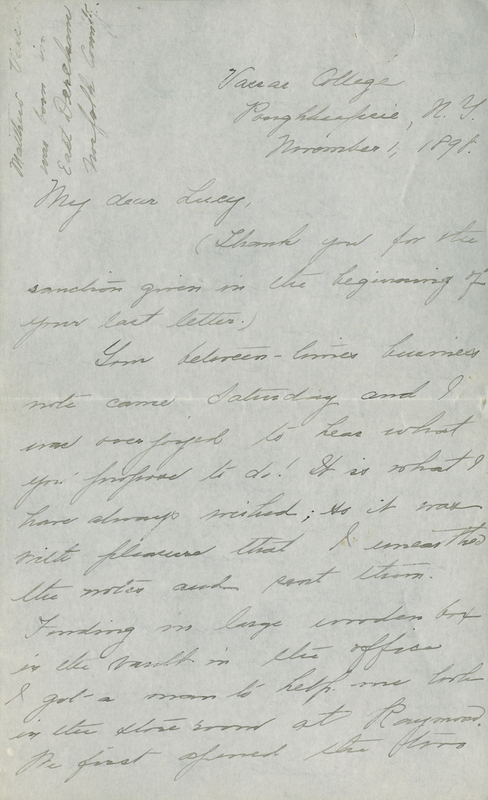 At a time when formality was the rule, especially in correspondence between a professor and her former pupil, addressing one another by first name had great significance.

Underhill again encourages Salmon to push through her bouts of disillusionment:

“Your grasp is already far beyond that of any one you mention or any of the rest of us.  You are not working for this passing generation and why should what they say be anything to you?  The rising generation will call you blessed.  Just as those who used to be with Miss Mitchell continue to derive their best from Her inspiration which she gave them, so those who have been here the last few years will always remember the inspiration gained from you.  Is it nothing to have been the most inspiring teacher in Vassar College during ten years?” 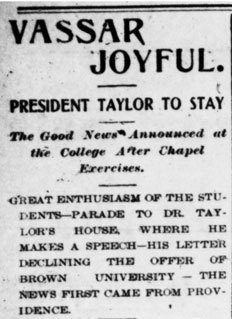 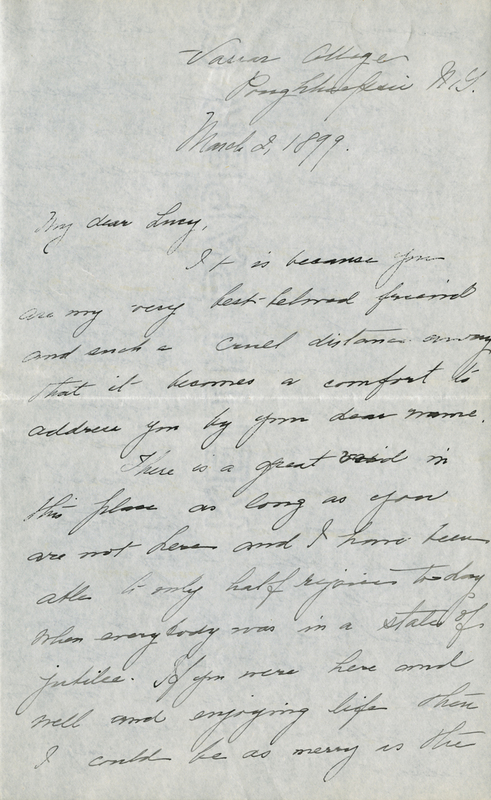 Underhill describes the rejoicing on campus at the news that Pres. Taylor has rejected Brown University’s offer of the presidency, choosing instead to stay at Vassar:

"The jubilee is over Dr. Taylor's decision to stay.  It certainly means immediate prosperity for the college in a material way.  Let us hope he will grow larger and more liberal in some ways an then there will be nothing to regret.  Personally I have such a great respect and liking for him that it is most of all for his own sake that I regret his limitations.  You will find his excellent reply to Brown in to-day's Eagle which I send.  The Tribune merely stated the fact of his declining the offer of Brown.  Ina prominent place on the editorial page appeared this paragraph: "Vassar College is to be congratulated on its success in persuading President Taylor to decline the call to Brown University and President Taylor is to be congratulated on having behind him so loyal a body of alumnae and being at the head of an institution which offers him a career of usefulness and honor not second to that promised by those who sought to draw him away."

It is said this telegram came from Brown to a student: 'It takes a tailor to make a man.  600 men are waiting to be made.' to which the student replied last evening: 'You must wear your old clothes.  We are going to keep the tailor.'"

She notes, however, that her own happiness is tempered by Salmon’s absence:

“There is a great void in this place as long as you are not here and I have been able to only half rejoice today when everybody was in a state of jubilee.  If you were here and well and enjoying life then I could be as merry as the merriest.  It is only the thought of how much better off you are there than here that reconciles me to fate.  I believe I have already said this enough times to tire you but I have to keep repeating it to console myself.” 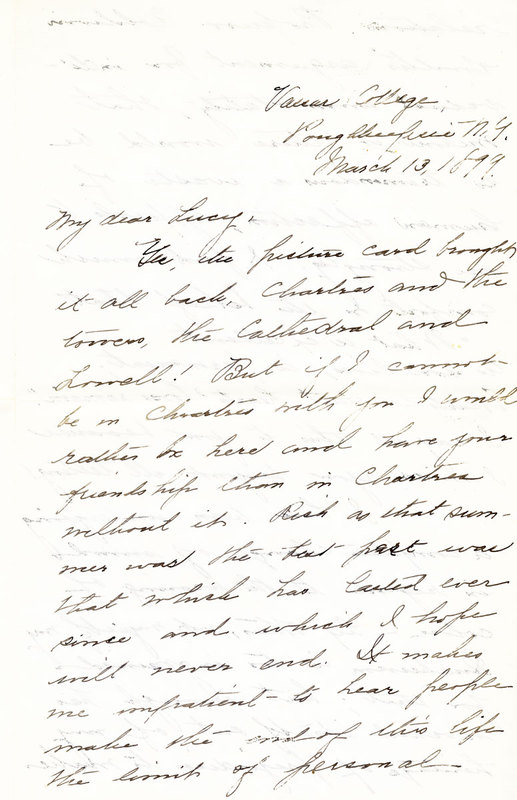 Yes, the picture card brought it all back, Chartres and the towers, the Cathedral and Lowell!  But if i cannot be in Chartres with you I would rather be here and have your friendship than in Chartres without it.  Rich as that summer was the best part was that which has lasted ever since and which I hope will never end.  It makes me impatient to hear people make the end of this life the limit of personal relations.  Professor Goldwin Smith's argument for individual immortality, that without it there would be so tremendous a wast of human affection, appeals to me strongly.  I find much comfort in the belief that

"What is excellent
as God lives, is permanent;
Hearts are dust, hearts' loves remain."

I say all this to you because I miss you beyond all telling! 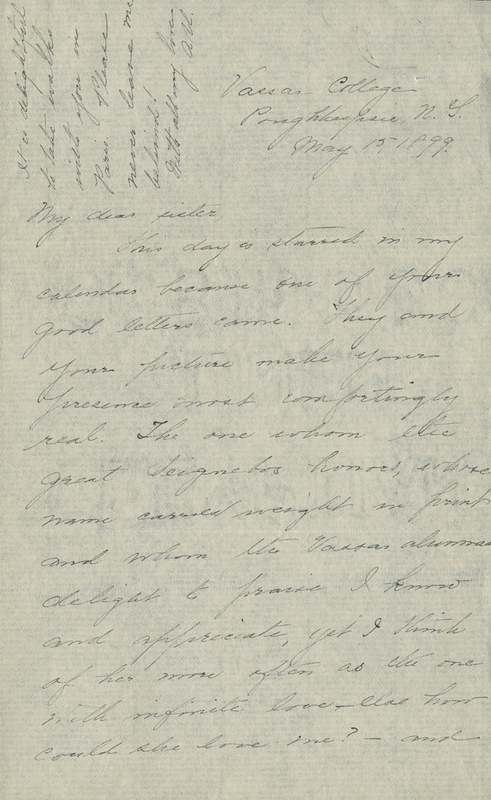 “I have never confessed that your picture is on my desk facing me, in a sandal wood frame that I must have bought on purpose the day before I left London.  There was never any one else whom I cared to think of having in view twenty-four hours in the day, seven days in the week, three hundred and sixty-five days in the year and so on, endlessly.”

Concluding her letter with some library business, she writes: "The VAHA is accumulating funds….I know there would be a unanimous vote for you to use the funds for Dreyfus literature and whatever else you choose.  Cannot the Executive Committee settle that?"

The VAHA was the Vassar Alumnae Historical Association, an organization founded by LMS in 1896, as part of her ongoing efforts to increase acquisitions of materials by the VC Library despite the indifference of President Taylor.  "Dreyfus literature" refers to pamphlets and books regarding the conviction for treason of Alfred Dreyfus, a French army captain of Jewish descent.  In 1899, following the efforts of progressive activists and intellectuals including Emile Zola, Dreyfus was brought back to Paris from a penal colony in French Guiana for a retrial in which he was found innocent. 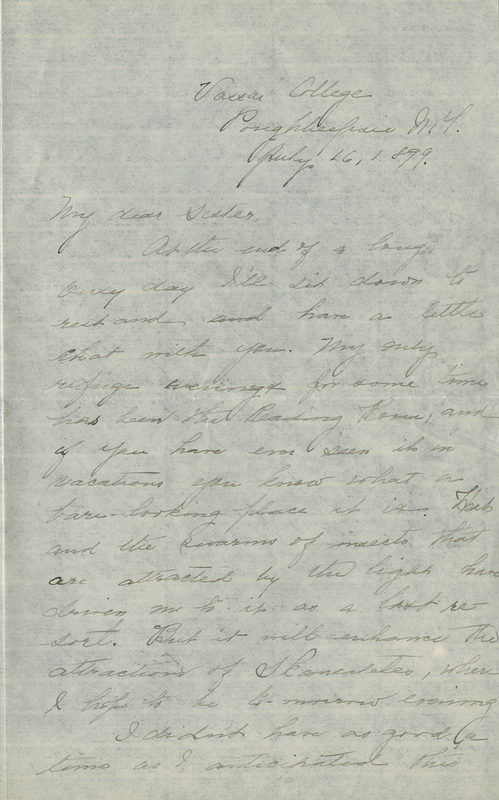 AU writes that she has contravened against the Dewey classification scheme in order to move books on the subject of “domestic service” to the social science labor division (300), away from technology (600), where books on housekeeping are found.  This was a practical demonstration of support toward LMS’ efforts to bring attention to the issues surrounding people who worked as household servants. In 1887, LMS had published her second book, Domestic Service, to mixed and in some cases, highly critically reviews that questioned the validity of the very subject of her work. Her focus on the lives of domestic workers was a reflection of both her interest in what would come to be known as the “new social history,” (the study of the past through the lives of common people and daily life), and in improving the lives of both household employees and employers by professionalizing the field.  (Adams and Smith, p. 6; Bohan, p. 67.  See Bibliography.).

AU’s awareness of the significance of a women’s college flouting the prescribed system of the classification of knowledge is revealed in her humorous observation, “Mr. Dewey would hardly recognize, much less countenance, our revised classification and would probably prefer its being called the V.C. rather than the D.C. Classification.”