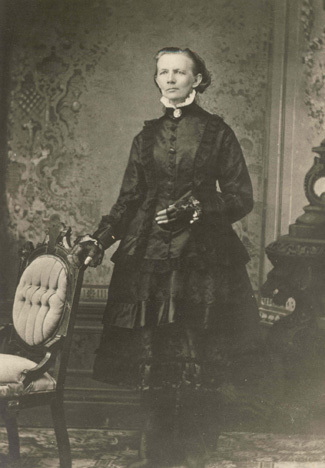 Lydia Sayer was born on Dec. 20, 1827 near Bellvale, a hamlet of the Town of Warwick, New York.  As a child she was fearless, self-reliant, physically active, and skilled in horsemanship and the domestic arts. Keenly interested in books and learning, she was devastated when as a young woman she was refused admittance to nearby Seward Institute for her habitual mode of dress-- an adaptation of Turkish pantaloons with shortened skirt.   In her own words,  “As I left…I fairly bathed my soul in an agony of tears and silent prayers….I registered a vow that I would stand or fall in the battle for women’s physical, political and educational freedom and equality.”

Lydia finished her education elsewhere and around 1853 studied hydropathy at the Hygeia-Therapeutic College in New York. 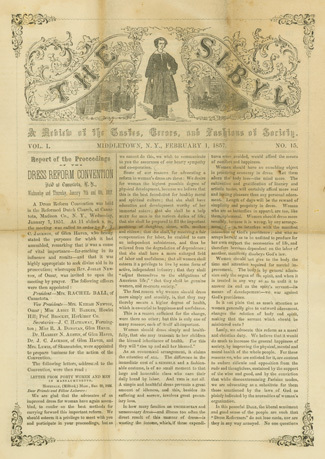 After practicing medicine in Washington and becoming a newspaper correspondent, she established the women’s dress reform newspaper, The Sibyl in early July 1856.   A few weeks later on July 27th she married her publisher John W. Hasbrouck, editor of the Middletown Whig Press (NY).  Her only concession to traditional bridal garb was that her customary ‘bloomer’ costume was white.  In the Sept. 1, 1857 issue of the Sibyl she protested the naming of the reform costume after Amelia Bloomer, stating that other women had adopted the garb before her.

The couple built a distinctive octagonal house in Middletown, the cutting edge of efficient domestic architecture at the time.  Lydia pursued her social and political goals, writing and lecturing, in addition to being a successful wife and mother.  Even through the Civil War years she was unflagging in her energy and determination to achieve women’s dress reform and suffrage.  It was her view that women could not hope for equality or to be able to compete in a man’s world while hampered with constricting, heavy, and impractical garments.

To this cause she devoted her entire life, passing away in August 1910 just ten years before women’s right to vote was at last realized.

View issues of The Sibyl in New York Heritage. These issues were contributed by the Historical Society of the Town of Warwick, NY.