Lucy Salmon frequently disagreed with Vassar President Samuel Taylor, who had been at the college since 1886.  Areas of conflict prior to 1900 included Salmon’s innovative teaching methods, her efforts to elevate the standing of women faculty, and her insistence that the library collection be expanded despite Taylor’s insistence that the school "[had] absolutely no fund to draw upon" and that the few books that the library did possess were sufficient. (See Brown's Apostle of Democracy in the Bibliography.)

In addition to maintaining an exhausting schedule of teaching and contending with the constant pressure of living with students in the dormitory, during her first decade at Vassar Salmon participated in the American Historical Association despite its resistance to equal membership and inclusion of women, helped found groups that would evolve into the American Association of University Women (AAUW) and the College Board for the development of standardized university entrance exams, and participated in many other professional and social reform organizations. It was during this time that she engaged in research into the history, economics, and contemporary conditions of domestic labor, a radical move within the then generally conservative field of history. 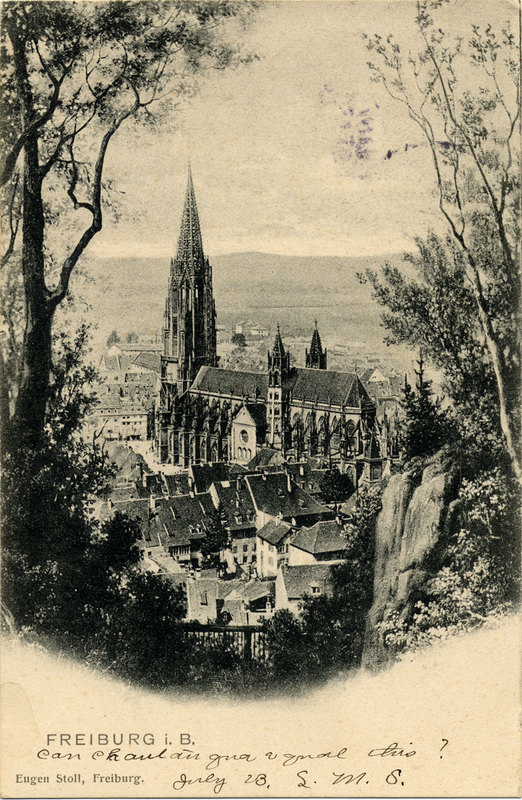 In the postcard shown on the right, LMS tells AU of the pleasure it gave her to collect pictures of libraries for her while traveling. She writes on the picture of Freiburg Cathedral, “Can Chautauqua equal this?” Underhill frequently attended lectures, concerts and other programs at the Chautauqua Institution in Westchester County, where a summer series of assemblies was held. 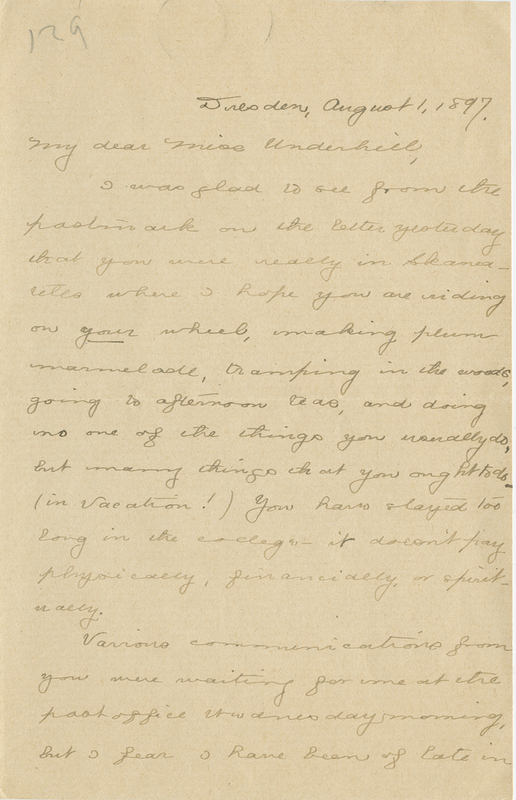 AU frequently spent time with her family in Skaneateles, NY during her vacations.  In this letter, LMS encourages AU to ride her new bicycle while she’s there:

My dear Miss Underhill,
I was glad to see from the postmark on the letter yesterday that you were really in Skaneateles where I hope you are riding on your wheel, making plum marmalade, tramping in the woods, going to afternoon teas, and doing no one of the things you usually do, but many things that you ought to do (in Vacation!)  You have stayed too long in the college- it doesn't pay physically, financially, or spiritually.

LMS had been introduced to bicycling in Europe, before it became popular in America.  She purchased a bicycle and brought it back to the Vassar campus.  President Taylor deemed her riding on campus undignified and specifically objected to her riding costume, a divided skirt and high boots. (see Brown's Apostle of Democracy in the Bibliography).

“During the 1890s, women in America and Europe joined in the bicycle-riding craze, delighting in the sense of mobility and freedom that it gave them.  ‘What enjoyment to a cramped and warped women’s life is the whirl of the wheel,’ wrote America’s Wheelwoman magazine in 1896, adding that bicycle riding raised a woman’s thoughts above ‘household cares,’ letting her rejoice in the feeling of liberty and delight in her own strength.’”   (Julie Wosk, Women and the Machine. Baltimore: Johns Hopkins University Press, 2001.)

LMS reports on her travels, describing "the pension on a noisy square where the presence of a real live baroness did not compensate altogether for that of a disagreeable Englishman, in spite of the fact that she was a most unique character who dressed much like a man, wore short hair in a pompadour with a silk smoking cape, sang divinely, convulsed every one by her dramatic ability and smoked cigars both in public and in private."

She also confides in AU about her frustrations and anxieties about her future at Vassar:

"But it isn't rain or ill fortune in schools or pensions that depresses me, but the question of what I am to do next year.  The department is under a cloud because the head of it writes too many magazine articles and I more than fear no time is to be left it to write any more, I do not see how two people- even if one is a man- can do the work for three hundred students when seven are required in English, two in economics, four in chemistry with a huddled students last year, and so in every other department, I've worn my life out trying to serve the college but in some way do not seem to have served it in the right way, to have left something undone, to have done the wrong things -- it all seems to have been of so little use to anybody.  I don't quite know what to do -- it seems to me intolerable to live longer under the imputation of disloyalty to the college when loyalty means to others what it does not mean to me, when unable to discuss any general educational question without having it distorted into an attack on the college, to be always under censure because I thing I see how things can sometimes be improved and to do what I can to improve them.  Alas, life seems to me all a dreadful burden with so little that is worth while." 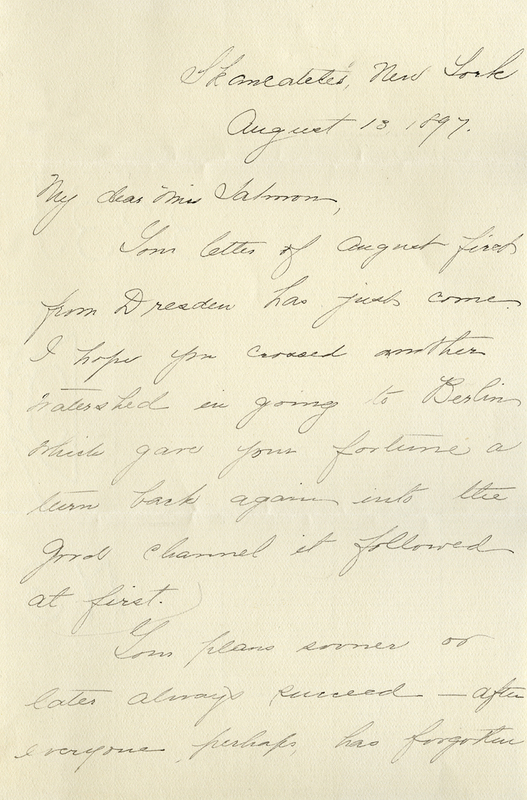 AU encourages and reassures LMS about her work and positive influence at Vassar, citing the introduction of instructors’ tables in the dormitories as an example.  Up until this point, according to Louise Fargo Brown in her 1943 biography of Lucy Maynard Salmon, faculty members were required to sit at a table where they were seated according to rank and length of service at all meals.  The lowest ranking members of the faculty were required to preside at students' tables.  LMS found this both undemocratic and stifling.

"You are worth more to VC than all the rest put together!  I am sure most of the V girls of the present generation would say that is most certainly true." 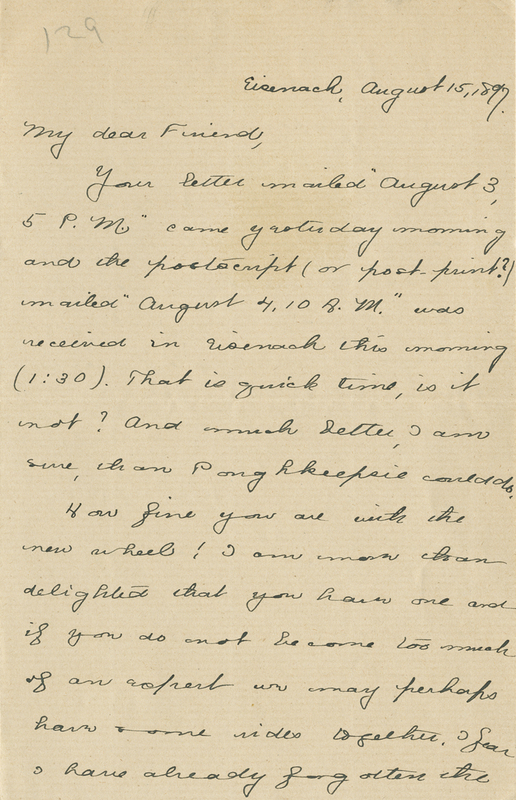 LMS thanks AU for sending news of contentions between the faculty and administration at Brown University that corroborates with her sense of being repressed by the Vassar administration.

“[I] am heartily glad the Brown faculty has had the courage to raise its voice against that sentiment that judges service to an educational institution by the number of dollars contributed; to protest against ‘the deadening influence of known or suspected repression,’ I took the protest in my pocket and climbed up to the Wartburg, which more than any other place in the world stands for freedom of speech.”

Wartburg is the castle where Martin Luther stayed after his excommunication by Pope Leo X and his refusal to recant at the Diet of Worms.

She goes on to describe some of the sexist discrimination she is faced with at hotels and from school administrators. 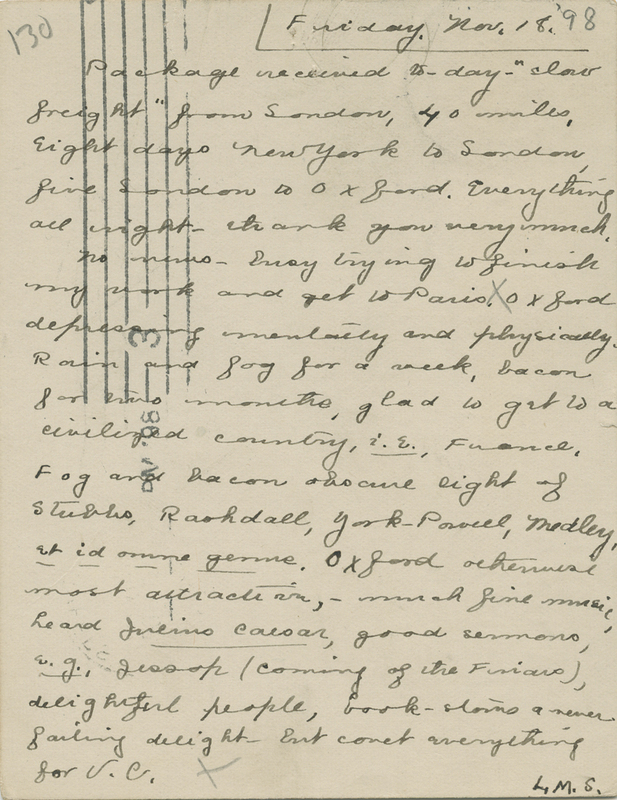 LMS writes to AU, “book-stores a never failing delight- but covet everything for V.C.”

From the beginning, AU and LMS collaborated to increase the Vassar Library’s collection.  President Taylor disagreed with the importance of this goal and denied further funding to build the library’s holdings.