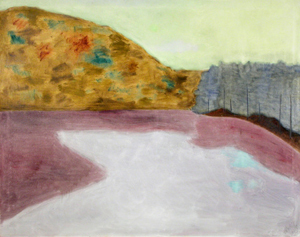 Sally Michel Avery had plans of being an artist even as a child growing up in Brooklyn.  While in art school she met Milton Avery, who went on to become one of the best known American painters of the twentieth century.  Instead of pursuing her own fame, Sally managed Milton’s career and supported the family with her illustrations for various publishers.  She exhibited her work only rarely.

The Averys’ association with Abstract Expressionists like Mark Rothko and Adolph Gottlieb fueled a broad exchange of pictorial ideas, although they were not always in agreement.  Sally Avery described the Abstract Expressionists as believing “trivial subjects couldn't make important paintings, which was very wrong. You can make a painting out of anything.”  Here a simple landscape depicting Cooper Lake, just outside of Woodstock, is made remarkable by its combination of perspectival depth and expressive, broadly abstracted fields of color.  Avery said in an interview: “If you paint a picture that you like, you just feel like flying. It's much better than LSD, I think.” 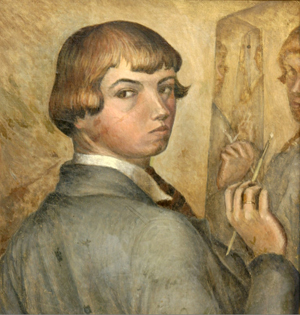 In this painting of Lucile Blanch at work on her self-portrait, she wears a utilitarian artist’s smock, the no-fuss hairstyle of the 1920s emancipated woman, and a wedding band marking her recent marriage to artist Arnold Blanch (they would divorce in 1933).  The series of receding, alternating reflections captured in the painting-within-a painting suggests the artist copied her likeness while looking into a three-paneled mirror on adjoining walls.  The effect is intense in its optical precision, but also surreal and not immediately legible.  This dualism parallels Blanch’s lifelong interests in both realism and abstraction, bridging the divide between American scene painting and more experimental modes. 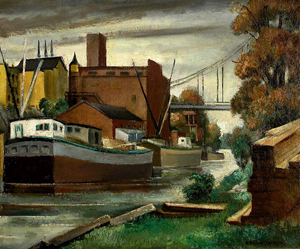 Florence Ballin attended the Art Students League in Woodstock, NY, then went to Europe and married German painter Konrad Cramer.  Settling in Woodstock in 1911, the Cramers were at the forefront of the art colony’s more radical faction, advocating for abstraction and other modernist trends.  From 1919-1920, Florence ran the “Florence Gallery” on 57th Street in New York City as a forum for progressive Woodstock art.

Cramer’s painting of Kingston, the closest city to Woodstock, is a labor scene without the laborers.  The Wurts Street Bridge, a steel suspension bridge completed in 1921, connects the factories, cargo barges, and other signs of industry at left with the trees at right, which will one day become the lumber stacks in the right foreground.   Flattened, angular, and unromantic, Cramer’s painting style is here informed by the minimalism of Charles Sheeler and the basic realism of American scene painters like Grant Wood.

Ukraine-born Eugenie Gershoy was primarily a sculptor.  She worked in stone, wood, and plaster – materials once considered exclusively “masculine” because of the strength required for their manipulation.  But Gershoy was a powerful spirit, evidenced by her long, active life, including several years in the spartan conditions of Hervey White’s Maverick Colony.

Despite leaving New York City for what she called the “primitive but marvelous existence” of the Catskills, this small watercolor reveals Gershoy’s attraction to urban spaces.  Depicting the Rondout section of Kingston, the largest city near Woodstock, the painting combines the naïve perspective of folk art with the collage-like, shifting viewpoints of Cubism and other modernist trends.   Despite urban renewal projects in the 1960s, many of the colorful old houses shown here are still in existence today.  Gershoy would spend the second half of her life in San Francisco and New York City, although she often returned to visit Woodstock. 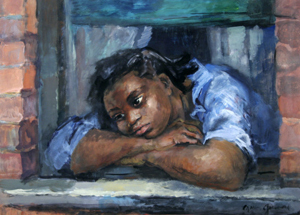 Marion Greenwood said her greatest visual inspiration came from studying different ethnicities.   The first American woman to receive a mural commission from a foreign government, she painted a fresco depicting Tarascan Indian life at a university in Mexico.  Despite the approval of Diego Rivera and Jose Clemente Orozco, the perceived politics of the commission created tension for the artist: “I had to stay in my hotel room like a prisoner at night . . . There was a lot of unhappiness connected with it, and I did receive letters and anonymous phone calls to leave the place.”

In Summertime, an unidentified African-American girl gazes out a window.  The painting may have originated as a study for a mural Greenwood did for a housing project in Camden, New Jersey, after returning from Mexico.  The model has a distant expression and is tightly cramped into the window frame, referencing the oppression of project life and perhaps Greenwood’s own feeling of imprisonment while working in Mexico. 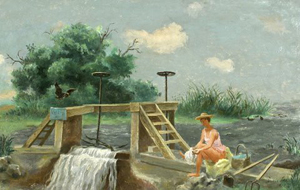 This self-portrait characterizes Doris Lee’s famously bold spirit as she undresses for a dip.  Folding her underwear, Lee’s crossed-legged pose wittily references nineteenth-century French paintings of dressing or bathing women that evoke a viewer spying outside the picture frame.   As for locale, the image is perhaps a composite of Lee’s favorite haunts.   It recalls Woodstock’s many swimming holes; a 1937 photo published in Life Magazine has Lee seated, fishing, on the wall of the Ashokan spillway a few miles outside of town.  But the grassy, open space suggests someplace near the Florida residence where she and Arnold Blanch wintered.

Sassy, sophisticated, and nostalgic all at once, Lee’s paintings and magazine illustrations identify her as a sharp chronicler of American life in the first half of the twentieth century. 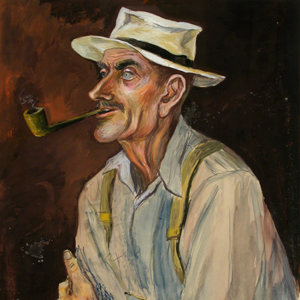 Lowengrund moved between painting, printmaking, and a career in journalism.  She was an associate editor of Art Digest and wrote prolifically on debates in contemporary art.  She comments wryly on women both as artists and as subjects of art: “Women are dummies to some artists and writers, it seems, and real live phenomena to others,” she wrote.  In another article, Lowengrund lamented the rarity of women artists receiving Guggenheim Fellowships, a highly prestigious award.

Documentation is limited, but Charlie Kogan is believed by some to have been a farmer.  Another possibility is that he was a relation of designer Belle Kogan, an exact contemporary of Lowengrund.  Belle Kogan studied with Woodstock artist Weinold Reiss and, like Lowengrund, attended the Pennsylvania Academy of Fine Arts.  She then went to the Pratt Institute in Brooklyn, where Lowengrund taught and founded the Graphic Arts Center. The energetic striations of the sitter’s face and fluid linearity of his shirt can be likened to Lowengrund’s painterly approach to lithography. 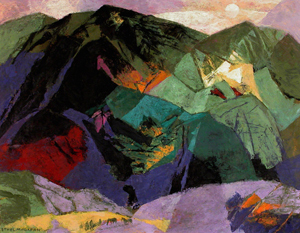 Ethel Magafan spent her first three decades in Colorado and California, cultivating an enduring visual attraction to the Western landscape.  At 22, she was the youngest artist to receive an important public mural commission as part of the WPA; she was granted seven in total from 1938-1943.  As part of these assignments, she and her twin sister Jenne, also a painter, drove all over the country in an old station wagon.  The literature on Ethel and Jenne Magafan is typical of criticism on female artists prior to the 1970s, with frequent referencing of their artistic talent and good looks as being somehow related.

Long after settling in Woodstock in 1945, Ethel continued to paint quintessentially Western mountains and horses such as those in Early Evening.  Velveteen patches of color and an angular monumentality result from her stark approach to light and shadow. 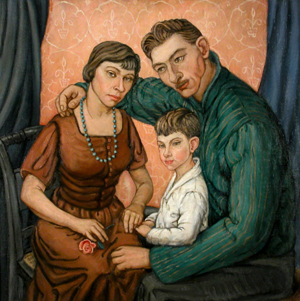 Madeline Shiff’s Family Group is a self-portrait with her husband, the painter Arnold Wiltz, and their five- or six-year old son Eric.  The painting typifies American regionalism of the 1930s in its hybrid of hard-edged clarity and illustration-like simplicity.  Shiff started painting fairly late in life, probably learning some of her style from Wiltz’s eerily clear, cool landscapes and buildings.  After Wiltz died in his late forties, Shiff built a house in Woodstock based on a Quonset-hut, which she decorated with tiles she crafted herself. 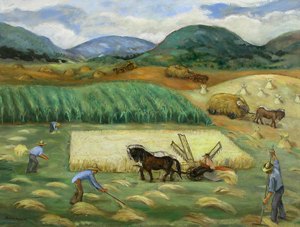 This lush scene of Catskill valley farming has a timeless quality.  Varian had a simultaneously urban and rural sensibility, resulting from being a New York City native who migrated to the country.  She had a romantic relationship to pastoral life, fishing and bathing in her backyard brook, but maintained a cosmopolitan mindset that informed a lifelong interest in socially-relevant themes.  This is reflected in an essay Varian wrote about the “Big Business” of art, where she wonders why of all the paid professionals in the art world – including laborers such as shippers and packers – artists themselves remain penniless.

In her twenties Varian visited France and exhibited at the prestigious Durand-Ruel Galleries, best known for supporting the Impressionists in the late nineteenth century.  In Rye Harvest, the influences of Pierre-Auguste Renoir and Paul Cézanne are clear in the color, Varian’s primary interest.  Her respect for Vincent van Gogh and Camille Pissarro is evident in the agricultural subject matter and horizontally-stacked composition. 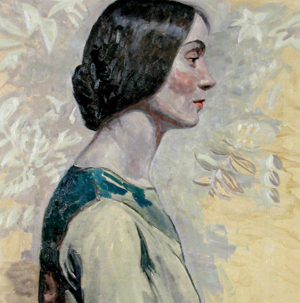 After studying in Philadelphia with painter and photographer Thomas Eakins in the 1880s, Schütze embarked on a productive career as a photographer.  Along with Alfred Stieglitz, she was a founder of the Photo-Secession in 1902, which championed pictorialism: the manipulation of photographic images to emphasize their artistic (as opposed to purely documentary) function.  When invited to participate in an exhibition of women photographers, Schütze insisted on her goal “not to have my work represented as ‘women’s work’. I want [my work] judged by only one standard irrespective of sex.”

Schütze had a house in Woodstock, where she and her husband spent summers and autumns from 1910-1925.  There she returned to painting, working primarily in still life and portraiture, the latter her forte as a photographer.  Few of her paintings survive.  The atmospheric, floral backdrop echoing the profile of dancer Drusilla Balduf is Schütze’s painterly citation of one of the features of pictorialism.