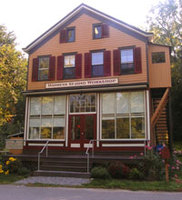 Women's Studio Workshop (WSW) was founded in 1974 by four women artists, Ann Kalmbach, Tatana Kellner, Anita Wetzel, and Barbara Leoff Burge. They were committed to developing an alternative space for artists to create new work and share skills. Programs were centered on the artistic process and often informed by feminist values. Today WSW offers the only visual arts residency in the United States solely for women and is the largest publisher of hand printed artists' books in the US. WSW provides one of the few full time paid internship programs in the country for emerging artists, and also works with school age youth in an art in education program which is a national model for arts outreach programs.

In the early years, the studios were located in a two-story single family house in Rosendale. Etching was in the living room, papermaking was in the attic, and screen printing was in the basement. Public programming included a regular workshop series, as well as special programs that featured the work of women artists.

Women's Work in Film and Video, a long-standing series of topical films made by women film makers, and Outskirts, a series of two-dimensional art exhibits, were initiated in 1976. These seasonal series were housed alternately at bars, dance studios or libraries-any place where WSW could access a new audience. The intention was to exhibit the work of women artists as well as provide professional experiences for the artists themselves.

In 1983, WSW moved into the Binnewater Arts Center (BAC), which was a major step forward. This made it possible for WSW to house both exhibition and studio programs under one roof. The BAC is a historic building that was once the 19th century Rosendale Cement Company Store and Post Office.

From the Victorian-style porch of the two-story frame and clapboard building, one could hear the roar of the kilns, the ringing of picks and hammers in the quarrying pits and the clanging of an endless stream of railroad cars. A century later, the empty mines from those days speckle the rolling mountains of Rosendale where a "new" industry has replaced the old. On long wooden counters that once displayed sacks of flour and kegs of nails for sale to the miners, professional artists and students manufacture handmade paper or letterpress print and hand-bind.

Each of the four founding women artists are still very much involved in the day-to-day operation of the studios. Together with a vibrant new generation of staff, WSW continues to refine its programs and studios. Today WSW is in the process of realizing their goal to purchase the property next door to the studios and will now begin the fundraising process to renovate this historic building as a first step in long overdue expansion. When this rehabilitation work is complete, WSW will have preserved a second structure in the Binnewater Historic District, listed on the Federal and State Registers of Historic Places, to take its place alongside the Wallkill Valley Rail Trail.