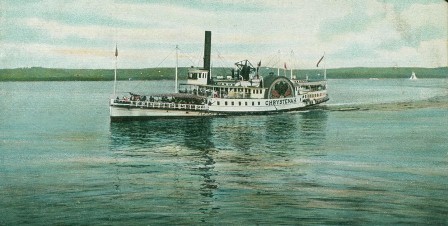 The Steamer “Chrystenah” No picture of Chrystenah Smith is available but a ferry named in her honor plied the waters of the Hudson for more than 40 years from 1866 to 1900+. In 1869 a newly painted Chrystenah left Nyack at 8 AM and returned from the foot of Harrison St. in New York City at 3:30 PM. An 1880s news article: “Chrystenah! The name of no other Nyack woman ever became more widely known along the Hudson than hers. No other name recalls more pleasant memories to those who have always lived along its banks. And yet Chrystenah Smith is remembered today, not for herself, but because her three sons [David D., Isaac P., and Tunis] named one of their boats for her. Her portrait, that of a charming old lady, decorated the companion way in the boat’s main salon, and the gentle features, the sweet face depicted there, were so lovely that they are remembered today even though no living person can tell you to a certainty what sort of woman Chrystenah Smith was.”
View this item on New York Heritage 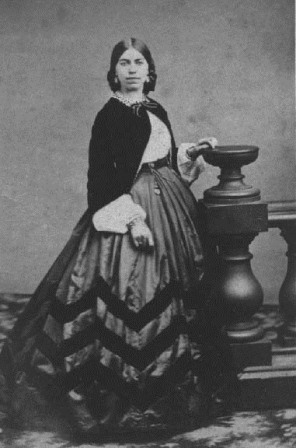 Woman at Railing – Carte de visite
In the Win Perry photo collection are a number of photos like this one, women in their best gowns –their hair arranged to flatter their features, standing or sitting in a photographer’s studio – and mostly unidentified. Note the clothing and jewelry of this subject. The dark jacket closed with a bow, a lacey shirtwaist with blouson sleeves, a flowing sateen skirt detailed with black velvet chevrons. She wears large earrings, backed by her coiffure which is pulled back behind the neck; at her waist, a watch fob with a looping chain. Obviously the portrait and the occasion were important, but her name was not. The carte de visite was a small photographic portrait popular in the second half of the nineteenth century. Each was approximately 2.25 x 3.5 in., about the size of a calling card.
View this item on New York Heritage 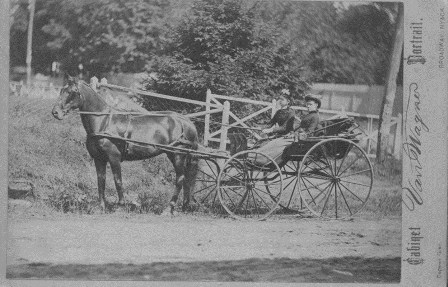 Carriage Ride
This beautiful image, a cabinet card, is larger than a carte de visite. Two young women are seated in a four-wheel carriage. One holds the reins in her hands as if the carriage is moving, but the horse and vehicle are still. Both women are wearing skirts and long-sleeved jackets and have donned hats for the occasion. This cabinet portrait was taken by Nyack photographer, Isaac M. Van Wagner. On the back is the notation, “Taken Tuesday September 18, 1883, Nyack, NY” but the women are not identified. We could speculate: Van Wagner was married and had two daughters; but we really do not know the identities of the women.
View this item on New York Heritage 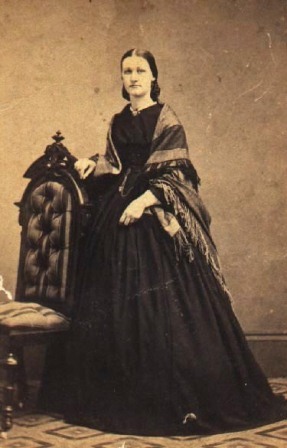 Here is an image of a beautiful woman whose name we know: Belle Hollenbeck. Alas, there are no other details about her or her family.
View this item on New York Heritage

Mary Elizabeth Haddock Hand has her hair swept back and piled atop her head. She is wearing a dress with a high collar, decorated with rick-rack. She was the sister of Roger Haddock of Piermont and the grandmother of the inventor, William Henry Hand, an associate of Thomas A. Edison. Mary’s husband, William H. Hand, was a New York City builder and craftsman. He bought the red sandstone Gothic mansion on South Franklin from Azariah Ross for $9000 and restored it. The family lived there for almost a century. 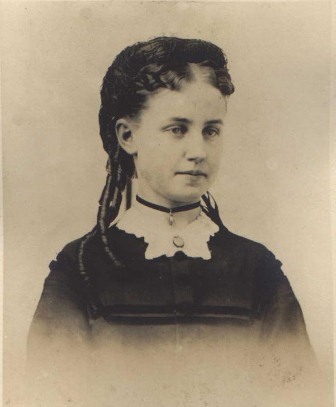 Mary Alling, a young teacher in 1871, has her hair in ringlets and is wearing a choker around her neck. She is listed in the Nyack school district records for only one year. Did she leave to get married?
View this item on New York Heritage

Florence Newton Merritt, in a beaded and embroidered dress, poses demurely for her portrait. George Hoffer was the photographer for this image. On the back is "first wife of Arthur Merritt." Arthur was a NYC manufacturer and lived on Gesner Avenue in South Nyack.