The little evidence we have of the Mary Powell Colored Employees Club comes from newspaper articles, primarily organized around the annual cake walk the club put on each year between at 1909 and 1917.

Cake walks were a style of dance popular in the 1890s and 1900s among Black communities, and often co-opted by Whites. Originating in enslaved communities as a mockery of the formal dances, primarily the Grand March, of Southern plantation owners, athletic variations invented by African and African-American dancers lent themselves well to competitions. Cake walks generally had two variations – graceful and athletic versions designed for Black audiences, and wild caricatures designed for White audiences, often in conjunction with minstrel shows. These two historic films illustrate the differences. The first shows Black dancers in formalwear, focused on elegance. The second features those same dancers in exaggerated dress, performing a comedic routine, likely for a White audience.

In 1909, the Kingston Daily Freeman announced the first annual cake walk of the “colored employees of the steamer Mary Powell.” About a month later, on September 23, the Freeman reported on the success of the cakewalk. Held at Michel’s Hall (located at 53 Broadway), “The hall was filled with friends of the Powell’s colored employes [sic], besides many others composing the officers and crew of the boat.” This mention of other officers and crew seems to imply that the event may have been integrated.

The article also lists the officers of the Mary Powell Colored Employees Club:

Prizes were offered for the best dancers, and first prize went to John Schoonmaker of Kingston, NY and Medina Schoonmaker of Poughkeepsie, NY. “Second honors were taken by Ott Overt and Maude Overt of Poughkeepsie.” The Poughkeepsie Evening Gazette also reported on the cake walk, likely because residents of that city placed in the contest.

But on October 3, 1912, the Kingston Daily Freeman announced “The first annual dance of the deck hands of the Mary Powell will be held in Washington Hall on Saturday evening.” On the appointed day, October 5, the Freeman reported:

“The Mary Powell deck hands will hold their annual dance in Washington Hall this evening. This dance has always been one of the most popular of the season and it is expected that this year will be no exception.”

Were these the same dance? Likely not – one took place on October 2nd in Michel Hall, located at 53 Broadway in Kingston. The other took place on October 5th in Washington Hall, located at 110 Abeel Street in Kingston. Was one a dance for the Black employees and the other a dance for White employees? Did the person writing the October 5th article confuse the deck hands’ dance with the Mary Powell Colored Employees Club dance? Or did the deck hands really have dances before 1912? 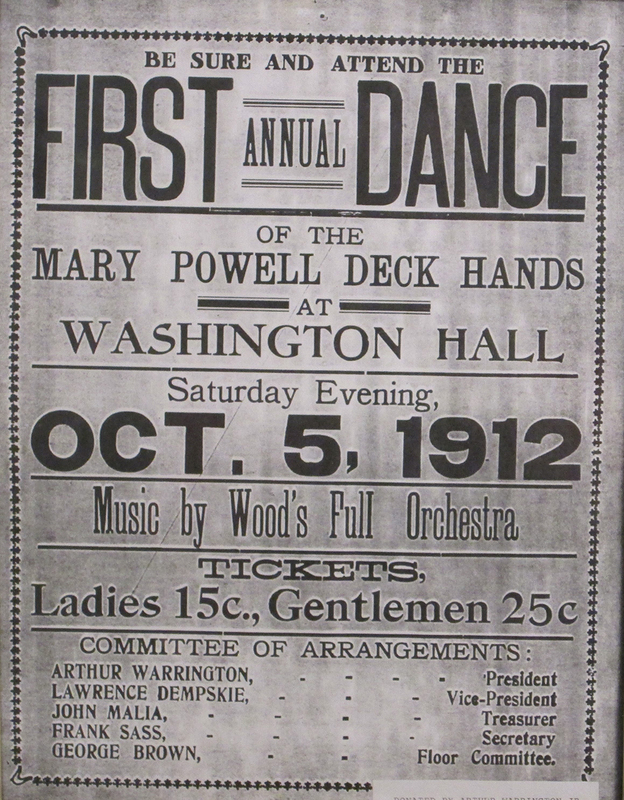 Notably, future Mary Powell captain Arthur Warrington is listed as the President of the Mary Powell Deck Hands. Lawrence Dempskie is listed as Vice-President, John Malia as Treasurer, Frank Sass as Secretary, and George Brown as chair of the Floor Committee. Note also the reduced price for ladies.

There is almost no further mention of either club or dance, except for one reference in the New York Age, a Black newspaper based in New York City. On September 20, 1917, the reported, “The annual dance given September 12 by the young men of the steamer Mary Powell was largely attended. Good music contributed to an enjoyable evening. Many from out of town attended.” This is almost certainly referencing the Mary Powell Colored Employees Club event.