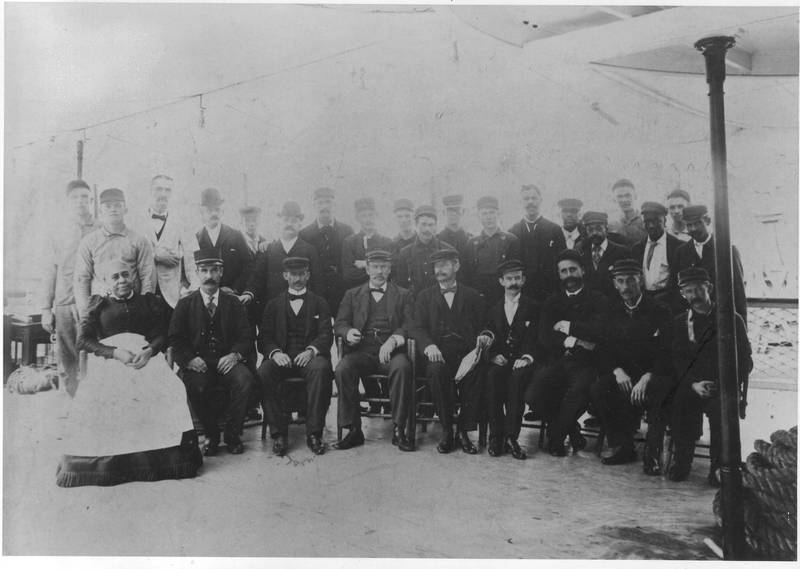 Like most passenger steamboats, the Mary Powell required a sizeable crew to operate, generally between 35 and 45 crew. The primary crew were those required to make the boat move from place to place. The captain acted as the leader of the crew, making decisions about departure times, speed, etc. The pilot, sometimes assisted by a second pilot, navigated the Hudson River, which could often be treacherous to those unfamiliar with her navigation channel, especially in rough weather or at night. The mate operated as the captain’s right-hand-man, coordinating with other crew.

The chief engineer was in charge of the steamboat’s engines, determining their speed and ensuring the safe operation of the boilers. Unlike a car, the pilot could not control the speed of the steamboat nor whether she was going forward or in reverse – he could only control the steering. The pilot communicated with the engine room via a series of bells and gongs – the “bell and jingle” would let the engine room know the speed and direction the pilot and/or captain wanted to travel, and when to stop and start the engines. Additional crew to stoke the coal fires and ensure adequate water supply for the boilers were also employed. These men often served second duty as fire suppression crew.

The deckhands loaded and unloaded passenger luggage, which was checked with the baggage clerk, and managed the lines securing the boat to the piers when departing and arriving. They could also be tasked with setting out and removing deck chairs during and in between trips.

The purser managed all money and valuables onboard, including dealing with hundreds of passengers who purchased tickets and checked valuables for storage in the on-board safe as they boarded and debarked at each stop.

When the Mary Powell was electrified in 1887, an electrical engineer was added to the crew.

Other crew included a barber, shopkeeper, and orchestra.