End of the Mary Powell

With the unexpected death of Captain A. Eltinge Anderson in June of 1914, pilot Arthur Warrington stepped up into the captaincy. He had started on the Mary Powell as a young man and worked his way up to pilot. He received his master’s license in in April of 1916 and the Mary Powell continued on in good hands. Despite the nostalgia that began to swirl around her, the beloved steamboat had several more uneventful seasons.

In the spring of 1916 she was reportedly “overhauled” and painted and was rumored to be taken out of service, which proved false. She also, finally, had that race with the Albany, although without nearly the coverage and attention afforded the first proposed race in 1881. On Wednesday, July 19, 1916, the Powell and the Albany were both headed south on the Hudson at approximately the same time. As the Mary Powell left the dock at Milton, the Albany was just a few minutes behind, and put on a burst of speed in an effort to past. The two boats went full steam ahead for Poughkeepsie, but the Mary Powell was the victor. 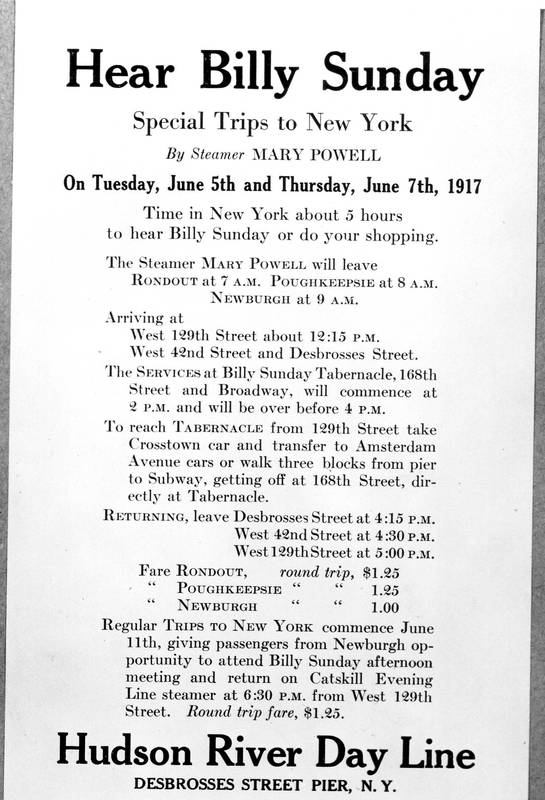 Her last regular season was in 1917, and was relatively uneventful, except for a few special charters, including one to New York City to see evangelist Billy Sunday. Sunday, a former professional baseball star turned Presbyterian minister, was immensely popular, and his revivals in New York City in 1917 brought tens of thousands of followers and spectators. Hyping up the fervor for Temperance and Prohibition, combined with fire and brimstone preaching, Sunday’s revivals were the talk of the town.

In 1918, she went from Queen of the Hudson to lady in waiting. Although in May of 1918 she reported ready for duty, the Hudson River Day Line kept her as an “extra boat,” likely kept in reserve for charters or as a back-up vessel should another regular vessel need to be temporarily taken out of service.

In August of 1918, the Poughkeepsie Daily Eagle published “River Traffic Has Changed,” noting the shift in passengers from the “up-river folks” heading to New York City, to primarily City people coming up river as tourists. About the Mary Powell, they noted, “The steamer Mary Powell will not be run this year. She lies in Rondout Creek, and is being used as a sort of storehouse for supplies for the other boats on the line. Of late years the Mary Powell’s run has not been a paying one, not even when the Albany made it, after the Mary began to slow up.”

The 1918 season had been complicated by the First World War. Since the U.S. entrance into the war on April 6, 1917, New York City increasingly served as the primary hub for soldiers and war materiel sent overseas. Tourism from Europe was nearly non-existent, and there had been coal shortages in the winter of 1917-18. The Hudson River Day Line cited reduced allowances of coal as one of the primary reasons for not only taking the Mary Powell out of service in 1918, but ending the day boat route from Kingston to New York City altogether, for the first time in six decades. In the fall of 1918, Captain Arthur Warrington died in the Spanish influenza epidemic. The Mary Powell’s days were numbered.

← Golden Jubilee
Steamboat for Sale →
End of the Mary Powell