"A Stink of Dead Stripers"

The following article by Robert Boyle from the April 25, 1965 issue of Sports Illustrated is presented here in its original and transcribed forms, unedited. 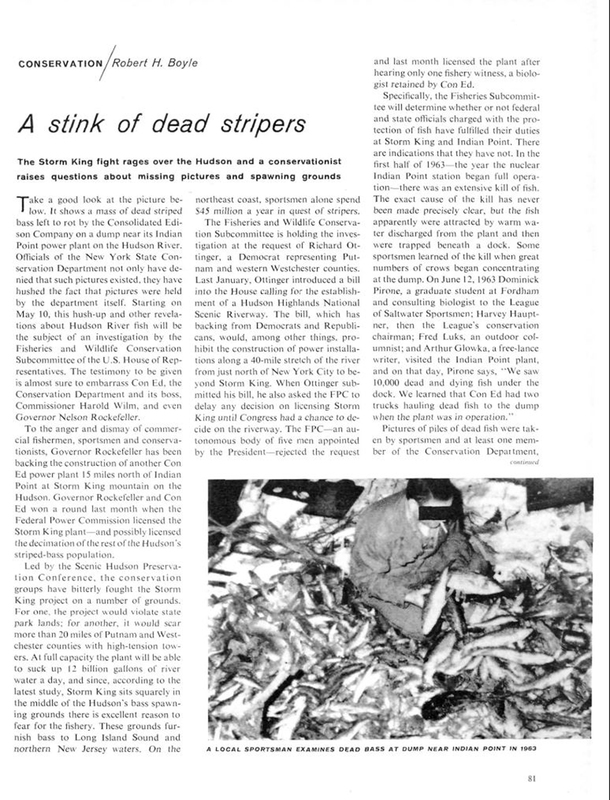 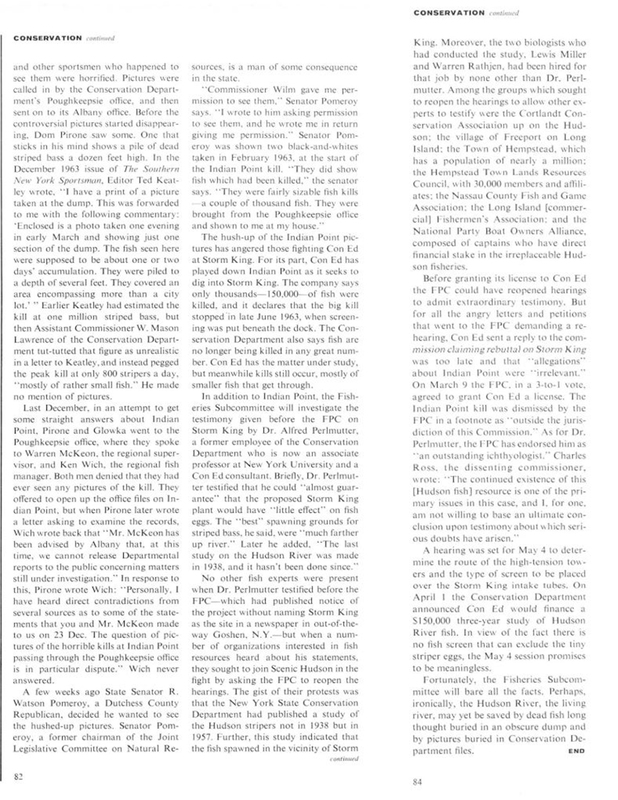 "A Stink of Dead Stripers"

Take a good look at the picture below. It shows a mass of dead striped bass left to rot by the Consolidated Edison Company on a dump near its Indian Point power plant on the Hudson River. Officials of the New York State Conservation Department not only have denied that such pictures existed, they have hushed the fact that pictures were held by the department itself. Starting on May 10, this hush-up and other revelations about Hudson River fish will be the subject of an investigation by the Fisheries and Wildlife Conservation Subcommittee of the U.S. House of Representatives. The testimony to be given is almost sure to embarrass Con Ed, the Conservation Department and its boss, Commissioner Harold Wilm, and even Governor Nelson Rockefeller.

To the anger and dismay of commercial fishermen, sportsmen and conservationists, Governor Rockefeller has been backing the construction of another Con Ed power plant 15 miles north of Indian Point at Storm King mountain on the Hudson. Governor Rockefeller and Con Ed won a round last month when the Federal Power Commission licensed the Storm King plant—and possibly licensed the decimation of the rest of the Hudson's striped-bass population.

Led by the Scenic Hudson Preservation Conference, the conservation groups have bitterly fought the Storm King project on a number of grounds. For one, the project would violate state park lands; for another, it would scar more than 20 miles of Putnam and Westchester counties with high-tension towers. At full capacity the plant will be able to suck up 12 billion gallons of river water a day, and since, according to the latest study, Storm King sits squarely in the middle of the Hudson's bass spawning grounds there is excellent reason to fear for the fishery. These grounds furnish bass to Long Island Sound and northern New Jersey waters. On the northeast coast, sportsmen alone spend $45 million a year in quest of stripers.

The Fisheries and Wildlife Conservation Subcommittee is holding the investigation at the request of Richard Ottinger, a Democrat representing Putnam and western Westchester counties. Last January, Ottinger introduced a bill into the House calling for the establishment of a Hudson Highlands National Scenic Riverway. The bill, which has backing from Democrats and Republicans, would, among other things, prohibit the construction of power installations along a 40-mile stretch of the river from just north of New York City to beyond Storm King. When Ottinger submitted his bill, he also asked the FPC to delay any decision on licensing Storm King until Congress had a chance to decide on the riverway. The FPC—an autonomous body of five men appointed by the President—rejected the request and last month licensed the plant after hearing only one fishery witness, a biologist retained by Con Ed.

Specifically, the Fisheries Subcommittee will determine whether or not federal and state officials charged with the protection of fish have fulfilled their duties at Storm King and Indian Point. There are indications that they have not. In the first half of 1963—the year the nuclear Indian Point station began full operation—there was an extensive kill of fish. The exact cause of the kill has never been made precisely clear, but the fish apparently were attracted by warm water discharged from the plant and then were trapped beneath a dock. Some sportsmen learned of the kill when great numbers of crows began concentrating at the dump. On June 12, 1963 Dominick Pirone, a graduate student at Fordham and consulting biologist to the League of Saltwater Sportsmen; Harvey Hauptner, then the League's conservation chairman; Fred Luks, an outdoor columnist; and Arthur Glowka, a free-lance writer, visited the Indian Point plant, and on that day, Pirone says, "We saw 10,000 dead and dying fish under the dock. We learned that Con Ed had two trucks hauling dead fish to the dump when the plant was in operation."

Pictures of piles of dead fish were taken by sportsmen and at least one member of the Conservation Department, and other sportsmen who happened to see them were horrified. Pictures were called in by the Conservation Department's Poughkeepsie office, and then sent on to its Albany office. Before the controversial pictures started disappearing, Dom Pirone saw some. One that sticks in his mind shows a pile of dead striped bass a dozen feet high. In the December 1963 issue of The Southern New York Sportsman, Editor Ted Keatley wrote, "I have a print of a picture taken at the dump. This was forwarded to me with the following commentary: 'Enclosed is a photo taken one evening in early March and showing just one section of the dump. The fish seen here were supposed to be about one or two days' accumulation. They were piled to a depth of several feet. They covered an area encompassing more than a city lot.' " Earlier Keatley had estimated the kill at one million striped bass, but then Assistant Commissioner W. Mason Lawrence of the Conservation Department tut-tutted that figure as unrealistic in a letter to Keatley, and instead pegged the peak kill at only 800 stripers a day, "mostly of rather small fish." He made no mention of pictures.

Last December, in an attempt to get some straight answers about Indian Point, Pirone and Glowka went to the Poughkeepsie office, where they spoke to Warren McKeon, the regional supervisor, and Ken Wich, the regional fish manager. Both men denied that they had ever seen any pictures of the kill. They offered to open up the office files on Indian Point, but when Pirone later wrote a letter asking to examine the records, Wich wrote back that "Mr. McKeon has been advised by Albany that, at this time, we cannot release Departmental reports to the public concerning matters still under investigation." In response to this, Pirone wrote Wich: "Personally, I have heard direct contradictions from several sources as to some of the statements that you and Mr. McKeon made to us on 23 Dec. The question of pictures of the horrible kills at Indian Point passing through the Poughkeepsie office is in particular dispute." Wich never answered.

A few weeks ago State Senator R. Watson Pomeroy, a Dutchess County Republican, decided he wanted to see the hushed-up pictures. Senator Pomeroy, a former chairman of the Joint Legislative Committee on Natural Resources, is a man of some consequence in the state.

"Commissioner Wilm gave me permission to see them," Senator Pomeroy says. "I wrote to him asking permission to see them, and he wrote me in return giving me permission." Senator Pomeroy was shown two black-and-whites taken in February 1963, at the start of the Indian Point kill. "They did show fish which had been killed," the senator says. "They were fairly sizable fish kills—a couple of thousand fish. They were brought from the Poughkeepsie office and shown to me at my house."

The hush-up of the Indian Point pictures has angered those fighting Con Ed at Storm King. For its part, Con Ed has played down Indian Point as it seeks to dig into Storm King. The company says only thousands—150,000—of fish were killed, and it declares that the big kill stopped in late June 1963, when screening was put beneath the dock. The Conservation Department also says fish are no longer being killed in any great number. Con Ed has the matter under study, but meanwhile kills still occur, mostly of smaller fish that get through.

In addition to Indian Point, the Fisheries Subcommittee will investigate the testimony given before the FPC on Storm King by Dr. Alfred Perlmutter, a former employee of the Conservation Department who is now an associate professor at New York University and a Con Ed consultant. Briefly, Dr. Perlmutter testified that he could "almost guarantee" that the proposed Storm King plant would have "little effect" on fish eggs. The "best" spawning grounds for striped bass, he said, were "much farther up river." Later he added, "The last study on the Hudson River was made in 1938, and it hasn't been done since."

No other fish experts were present when Dr. Perlmutter testified before the FPC—which had published notice of the project without naming Storm King as the site in a newspaper in out-of-the-way Goshen, N.Y.—but when a number of organizations interested in fish resources heard about his statements, they sought to join Scenic Hudson in the fight by asking the FPC to reopen the hearings. The gist of their protests was that the New York State Conservation Department had published a study of the Hudson stripers not in 1938 but in 1957. Further, this study indicated that the fish spawned in the vicinity of Storm King. Moreover, the two biologists who had conducted the study, Lewis Miller and Warren Rathjen, had been hired for that job by none other than Dr. Perl-mutter. Among the groups which sought to reopen the hearings to allow other experts to testify were the Cortlandt Conservation Association up on the Hudson; the village of Freeport on Long Island; the Town of Hempstead, which has a population of nearly a million; the Hempstead Town Lands Resources Council, with 30,000 members and affiliates; the Nassau County Fish and Game Association; the Long Island [commercial] Fishermen's Association; and the National Party Boat Owners Alliance, composed of captains who have direct financial stake in the irreplaceable Hudson fisheries.

Before granting its license to Con Ed the FPC could have reopened hearings to admit extraordinary testimony. But for all the angry letters and petitions that went to the FPC demanding a rehearing, Con Ed sent a reply to the commission claiming rebuttal on Storm King was too late and that "allegations" about Indian Point were "irrelevant." On March 9 the FPC, in a 3-to-1 vote, agreed to grant Con Ed a license. The Indian Point kill was dismissed by the FPC in a footnote as "outside the jurisdiction of this Commission." As for Dr. Perlmutter, the FPC has endorsed him as "an outstanding ichthyologist." Charles Ross, the dissenting commissioner, wrote: "The continued existence of this [Hudson fish] resource is one of the primary issues in this case, and I, for one, am not willing to base an ultimate conclusion upon testimony about which serious doubts have arisen."

A hearing was set for May 4 to determine the route of the high-tension towers and the type of screen to be placed over the Storm King intake tubes. On April 1 the Conservation Department announced Con Ed would finance a $150,000 three-year study of Hudson River fish. In view of the fact there is no fish screen that can exclude the tiny striper eggs, the May 4 session promises to be meaningless.

Fortunately, the Fisheries Subcommittee will bare all the facts. Perhaps, ironically, the Hudson River, the living river, may yet be saved by dead fish long thought buried in an obscure dump and by pictures buried in Conservation Department files.