The Power of Music

Sailing Songs was written and edited by Professor Richard W. Wilke in 1967 on behalf of the Hudson River Sloop Restoration, Inc. Containing original songs and anecdotes of Hudson River travel, Wilke's little book was designed to help fundraise for the construction of the sloop. To view the whole book, click on the PDF link below. 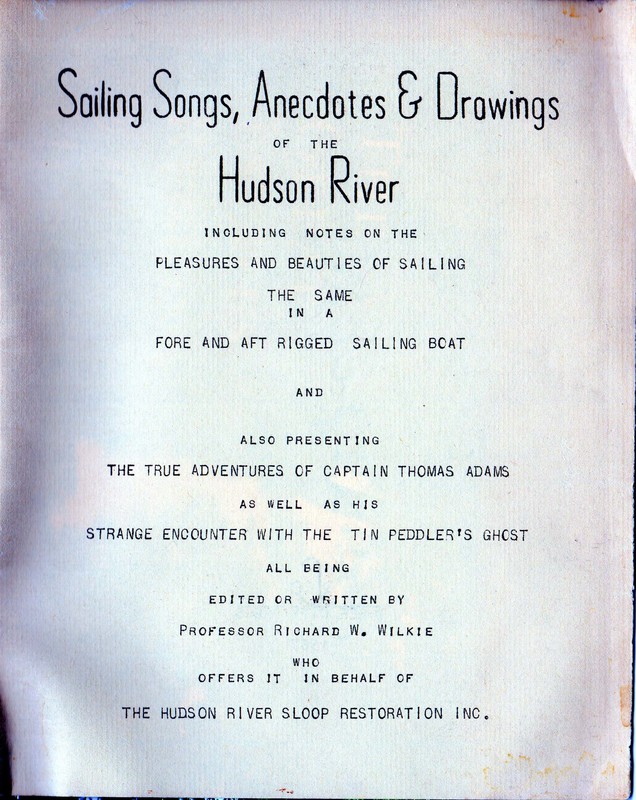 Songs by the Folk

Thanks to the involvement of folk singer and activist Pete Seeger, from the very earliest days Clearwater was surrounded by and involved with the folk music scene. Even before the sloop was completed, concerts were used to fundraise for the boat.

The Hudson Valley Folk Picnic was one such fundraiser. The first Picnic took place in a field in Garrison (the current site of the Desmond-Fish Public Library) in October, 1966 for the express purpose of fundraising to build the sloop. The Picnic continued every year through 1977, until it was replaced by Clearwaters Great Hudson River Revival (also known as the Clearwater Festival) in 1978.

This poster is from the Maiden Voyage of the Clearwater as she sailed from Maine to New York, fundraising along the way. It is done in the style of a early 19th century broadside. Hudson River Maritime Museum.

On May 17, 1979, Clearwater held a 10th anniversary concert to commemorate the original launching of the sloop on May 17, 1969. Hudson River Maritime Museum.

That first year of the Revival (1978), the dates were June 17 and 18 and ever since the Revival has been held on the third full weekend in June, or Father's Day weekend. It has almost always been held at Croton Point Park, but there were a few years in the 1990s when it was held at Westchester County Community College and one year at Marist College, due to the need for landfill remediation work at the Croton Point location. The only year Clearwater did not have Revival at all was in 2016, because of a lack of resources due to major restoration work taking place on the sloop. 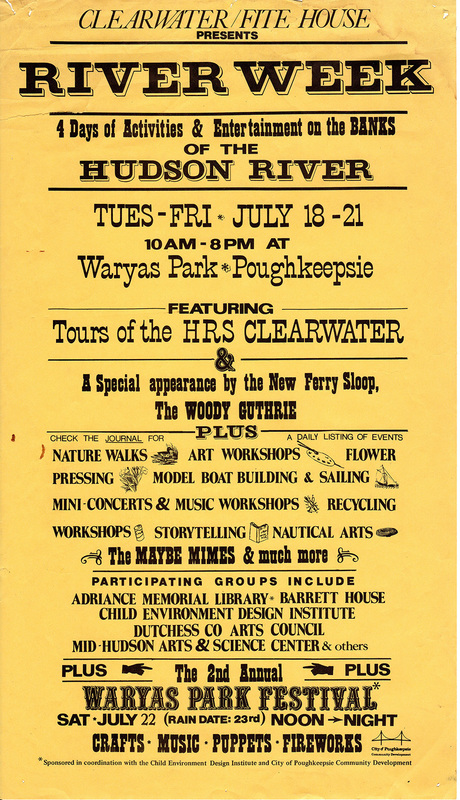 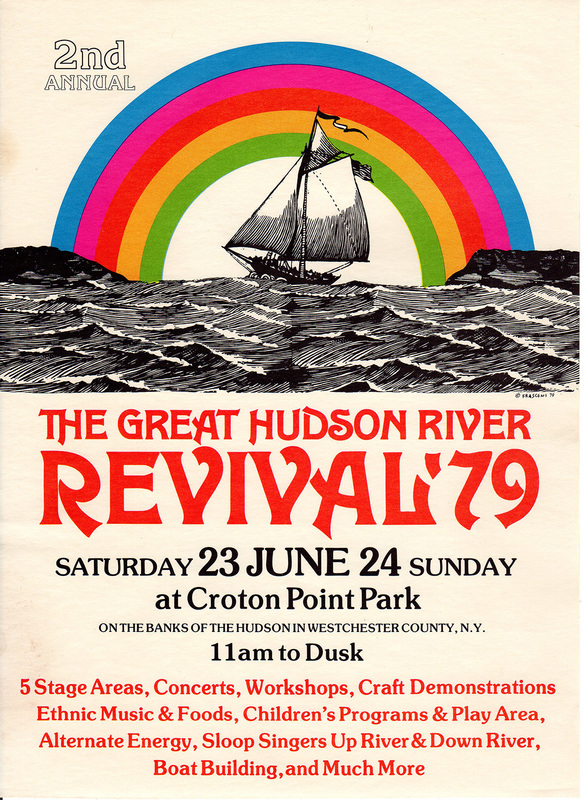 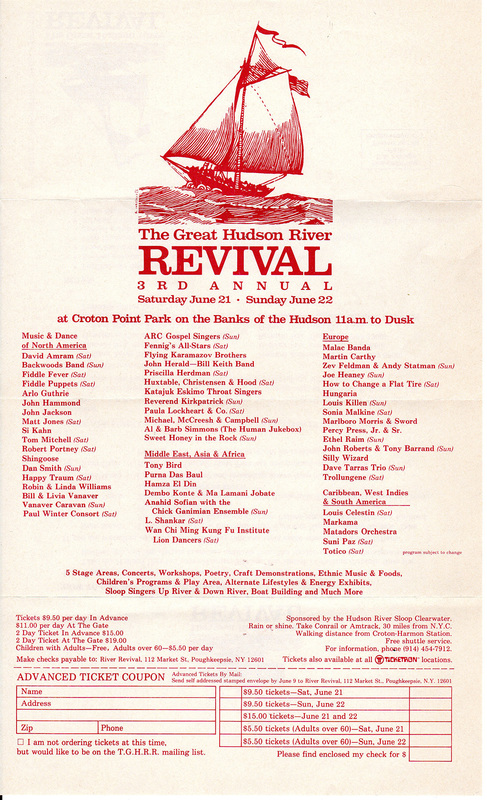 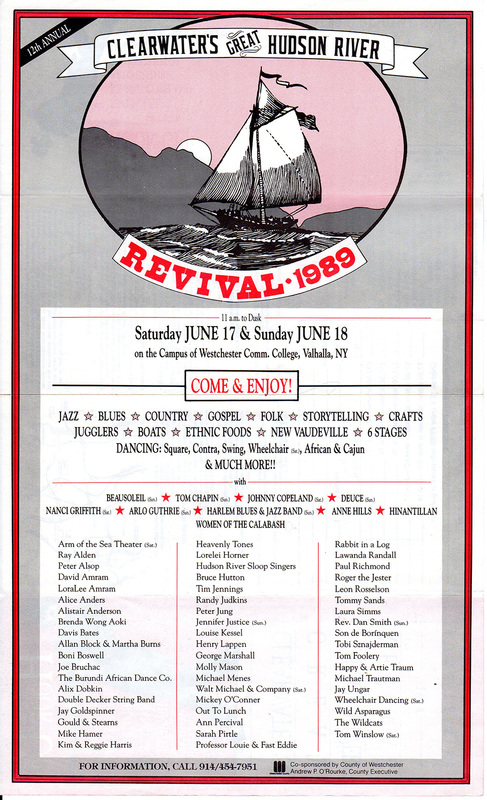 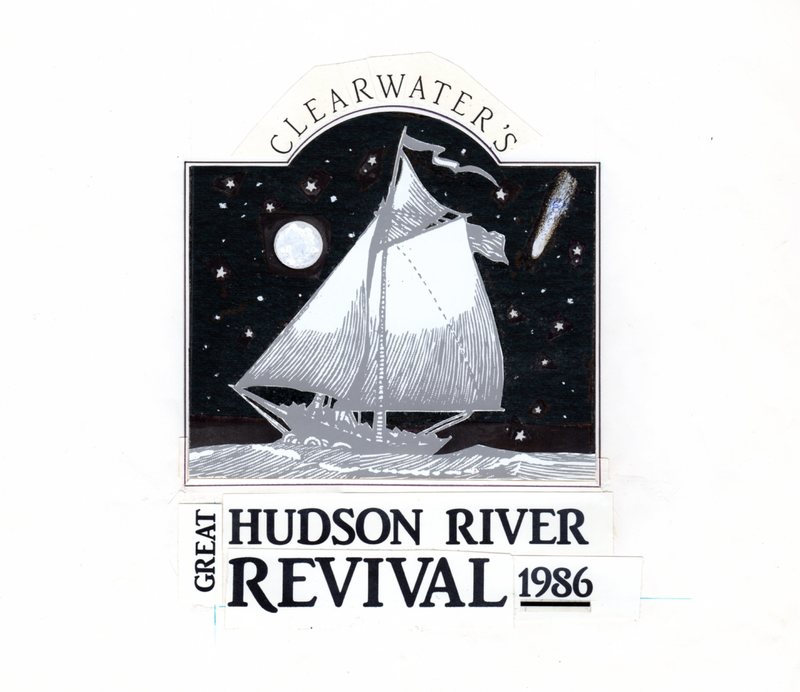 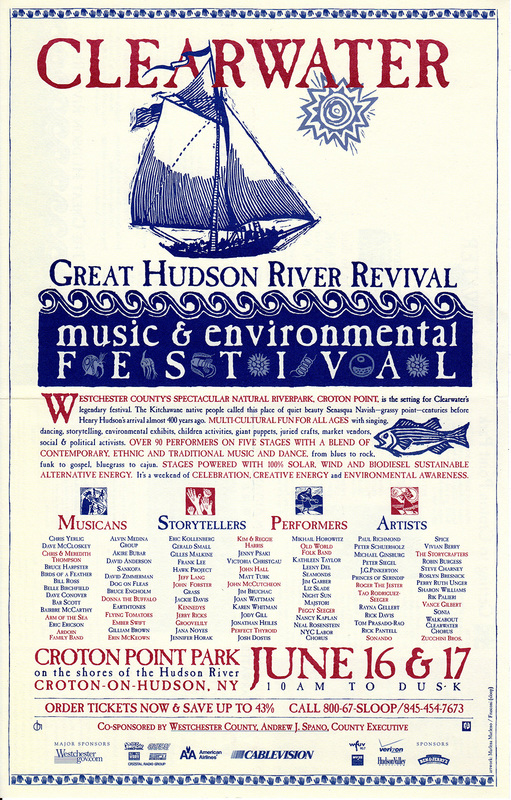 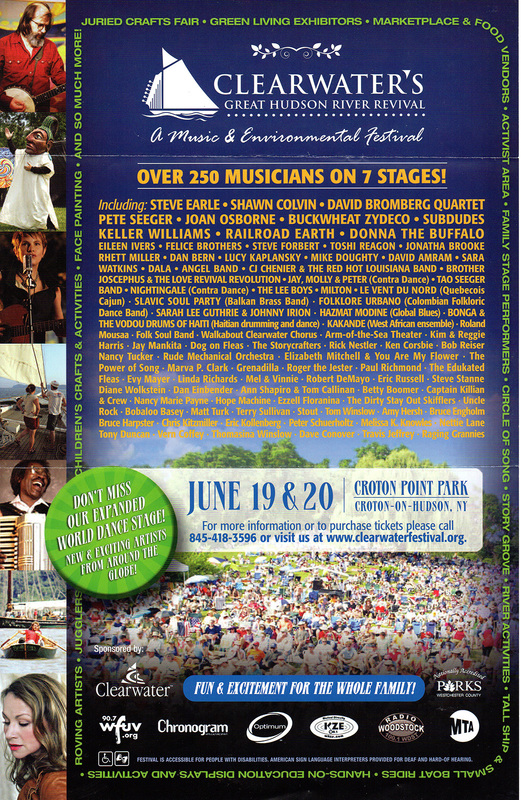 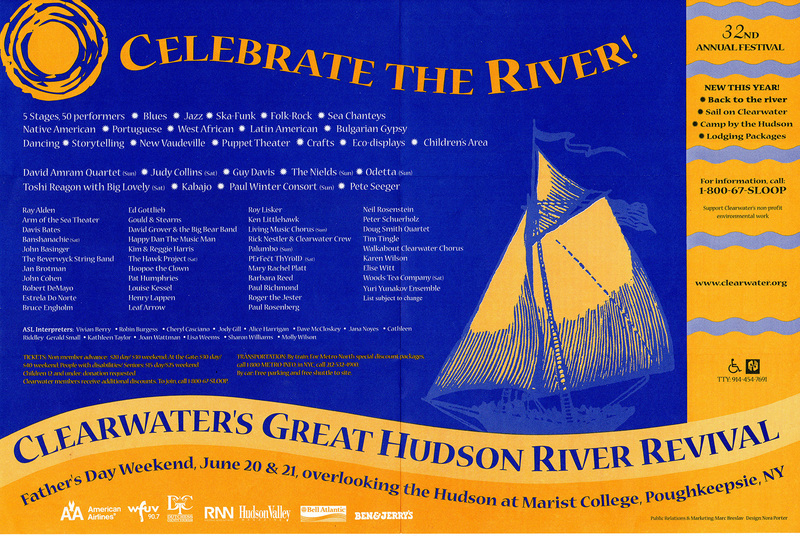 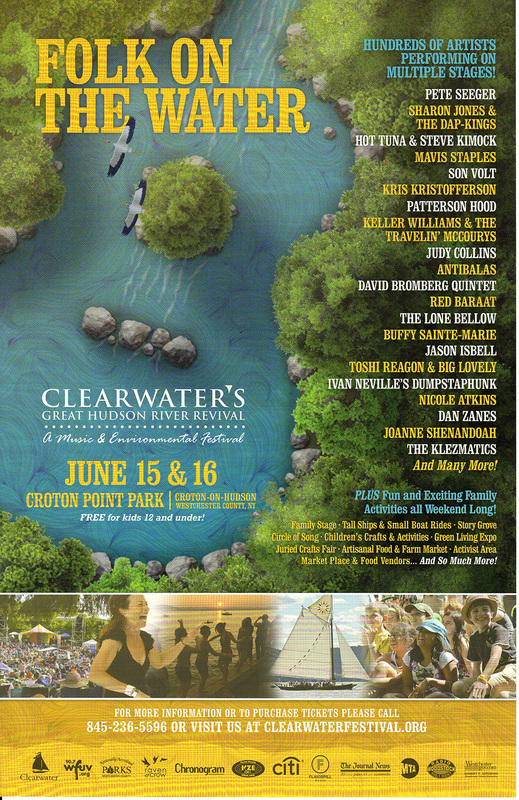 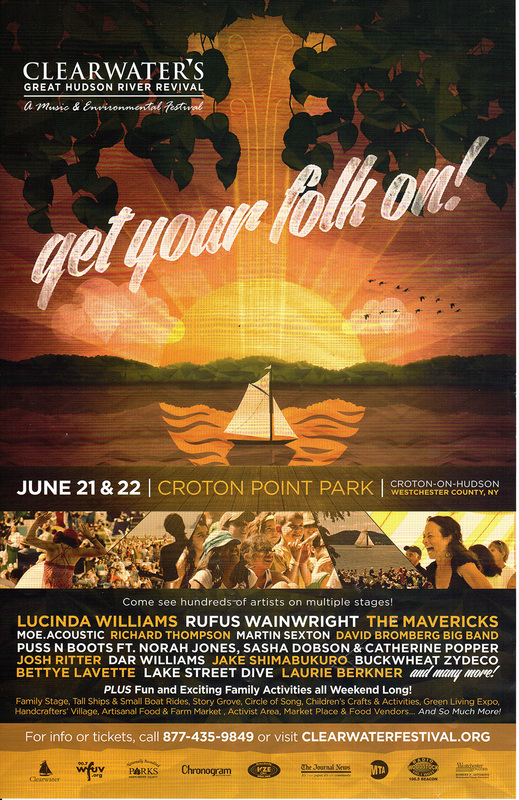 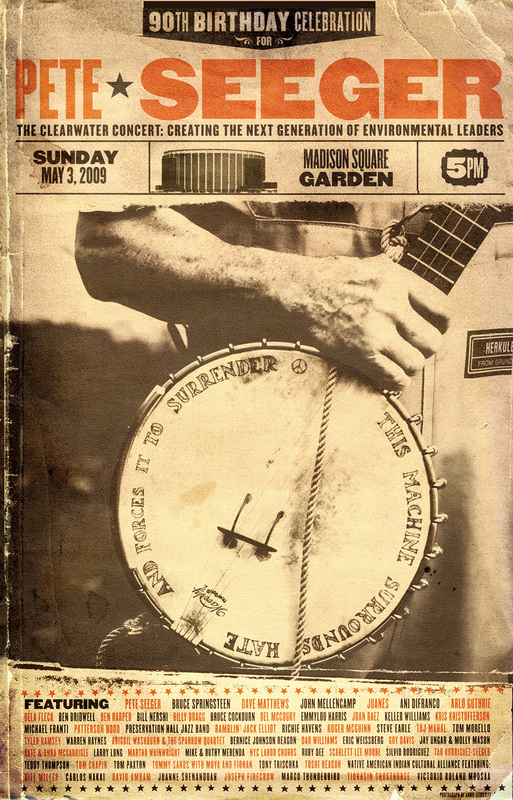 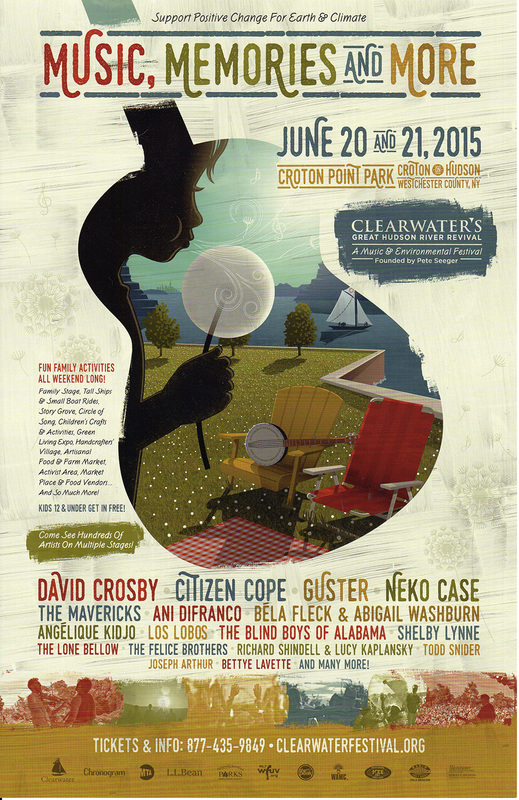 Clearwater's first "Pumpkin Sail" took place in October of 1971. It was a way to get kids and families down to the river, but it also re-created -- in a fun and festive way -- the traditional role of Hudson River sloops by carrying cargo (pumpkins) from town to town. So over the course of two weeks or so, the sloop would sail from Albany (or Rensselaer) to NYC, stopping in many communities along the way, symbolically linking those communities together via the river. The event always included pumpkins, music, "stone soup," and deck tours of the sloop. 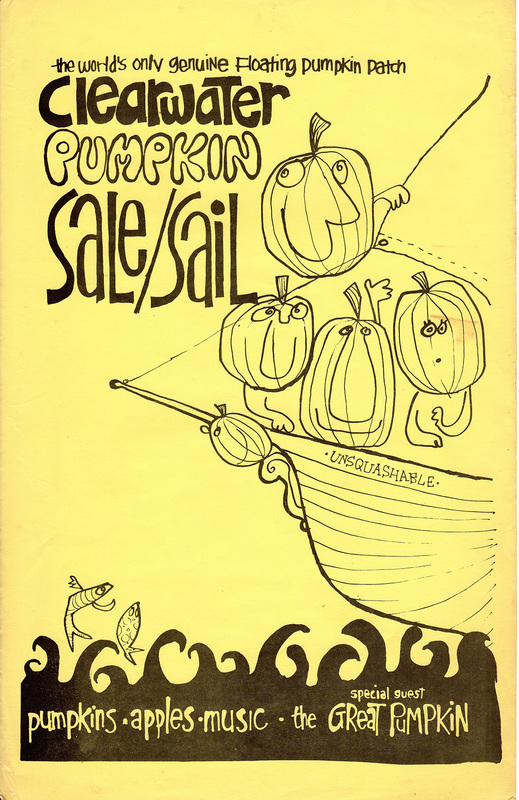 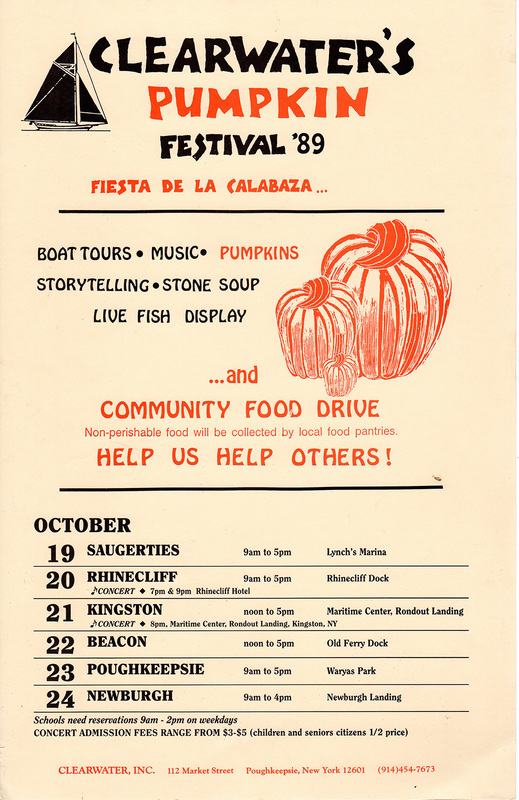 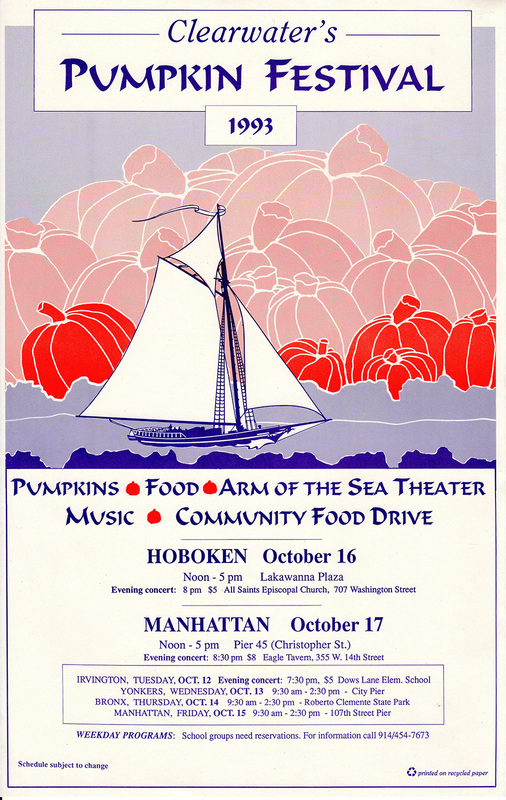 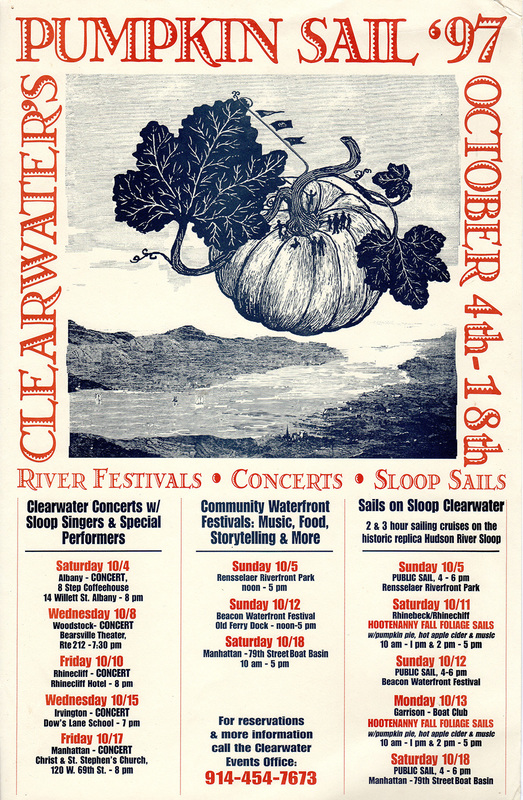 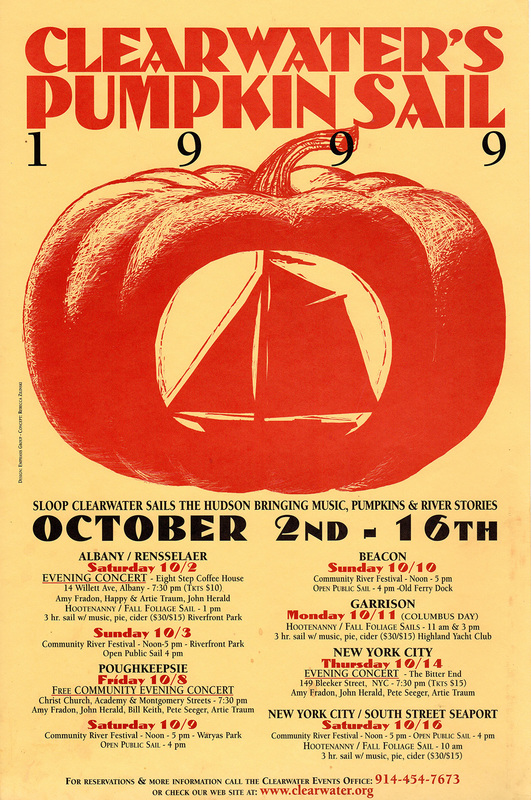