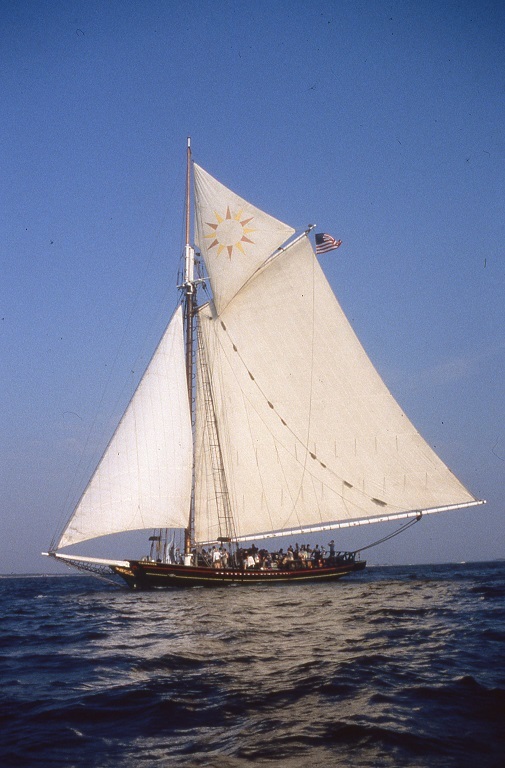 Sloop Clearwater under sail. Note the iconic sunburst topsail, which was first used on the mainsail of Clearwater for the Sun Day celebrations at the U.N. to support solar power, 1978. Photo by Chris Bowser, Clearwater.

On April 14, 1970, the Clearwater set sail from New York City, headed for Washington, D.C. to take part in the very first Earth Day celebrations on April 22. Although they were among the last to perform at the Earth Day rally, the following day Pete Seeger and others were scheduled to perform at an event hosted by Congressman William Ryan (D-NY). Before the public and members of Congress, Seeger sang the introduction to a multimedia performance that included a slideshow contrasting images of the 1850s Hudson with the polluted river of 1970. Accompanied by music, singing, dance, and acting, the Washington Post called the performance “stunning - and frightening.” Clearwater executive director Michael Micinowski closed by calling for federal standards and funding to clean up the Hudson and America’s other polluted waterways. This event is credited with turning the tide in favor of comprehensive federal regulations which ultimately resulted in the passage of the Clean Water Act in 1972. 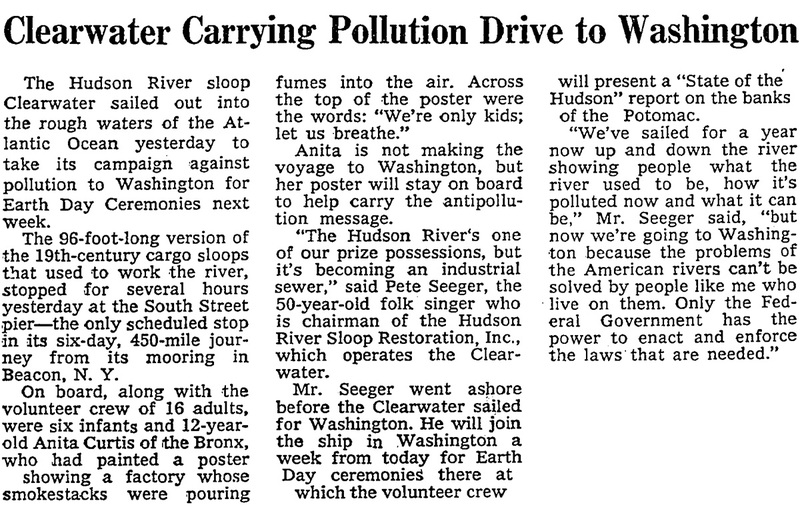 Coverage from the New York Times, April 14, 1970, of Clearwater's voyage to Washington, D.C. 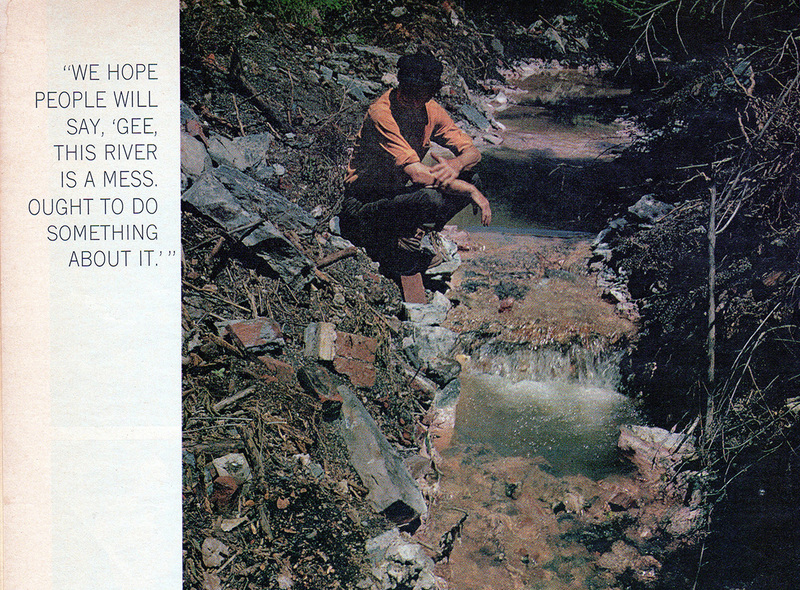 Pete Seeger courching by a polluted stream near Glens Falls, NY. This image was part of a profile of Seeger published in Look magazine, August 26, 1969. Photo by Dan Budnik. Clearwater.

With the passage of the Clean Water Act, Pipewatch volunteers John Cronin and Karin Limburg took on Tuck Tape in Beacon in 1974. They found over twenty dumping violations of liquid adhesive, solvents, latex, sewage, and more into a nearby creek. Their evidence helped Clearwater and the U.S. Attorney prosecute Tuck under the Clean Water and Refuse Acts. Although a Tuck spokesman called them “Boy Scouts with binoculars,” Clearwater and the Pipewatch program won and Tuck paid a fine of over $200,000 - the first successful prosecution under the Clean Water Act in New York State. 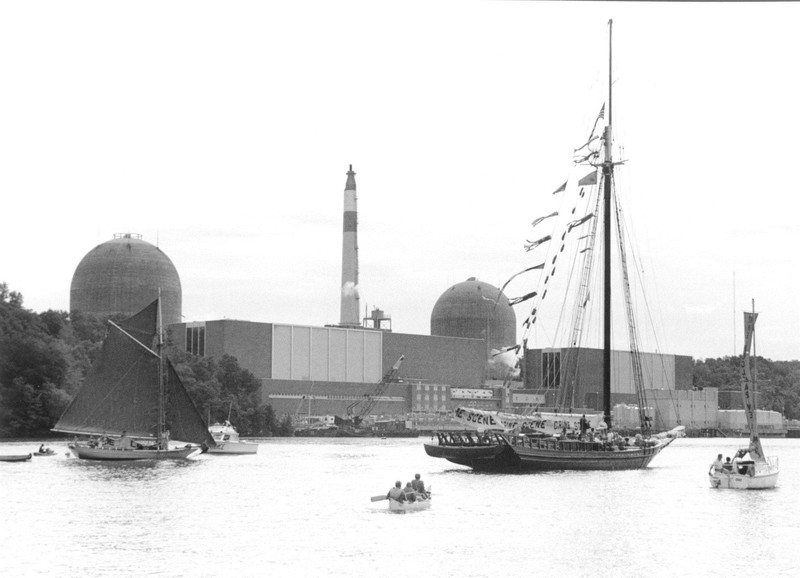 When Indian Point nuclear power plant was installed in 1962, atomic power was largely viewed positively by the public. But by the 1970s, Americans were increasingly worried about the long term effects of nuclear power. Clearwater joined in the protests about the effects on fish populations, as well as calls to close the plant for safety reasons. On Hiroshima Day, August 6, 1980, Clearwater released balloons off Indian Point to show how far the wind would carry nuclear fallout in the event of an accident. The most distant postcard returned was from Rhode Island. 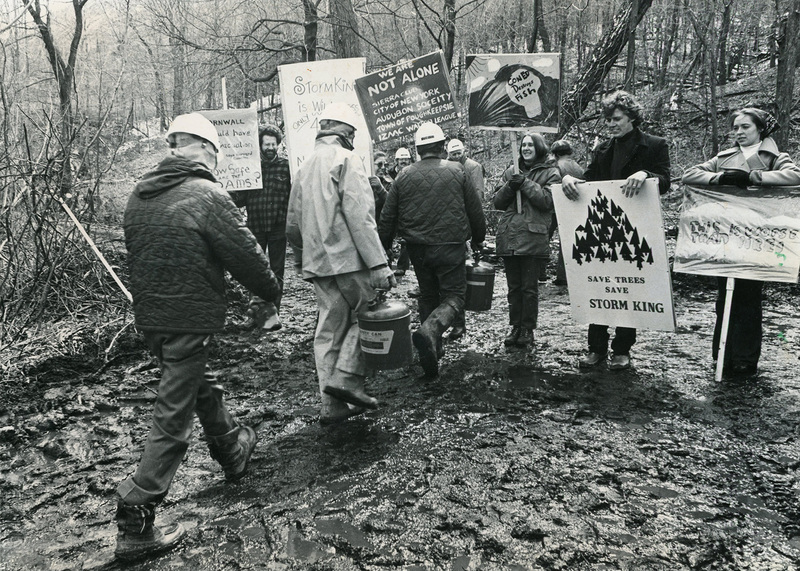 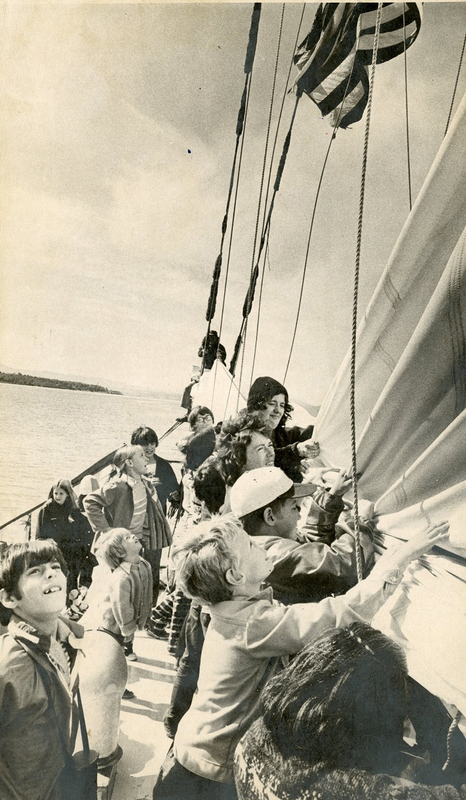 Young kids help fulr the sail while out on a school trip, c. 1975. Clearwater.

Almost immediately after launching, the Clearwater began to take Hudson Valley and New York City students on educational sails. By the mid-1970s, environmental education became a primary mission of the organization. Although teaching kids about the history of the river was important, the ecology of the river and the need to stop pollution became paramount. 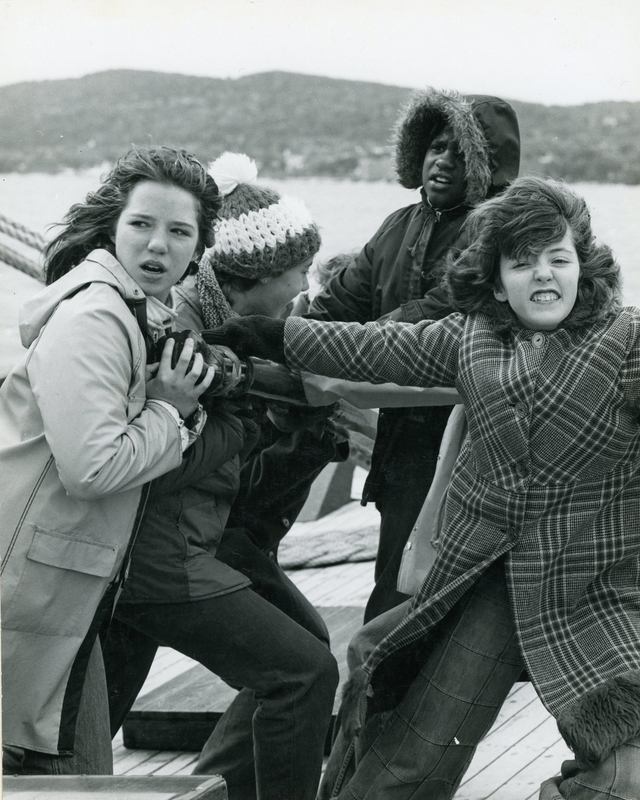 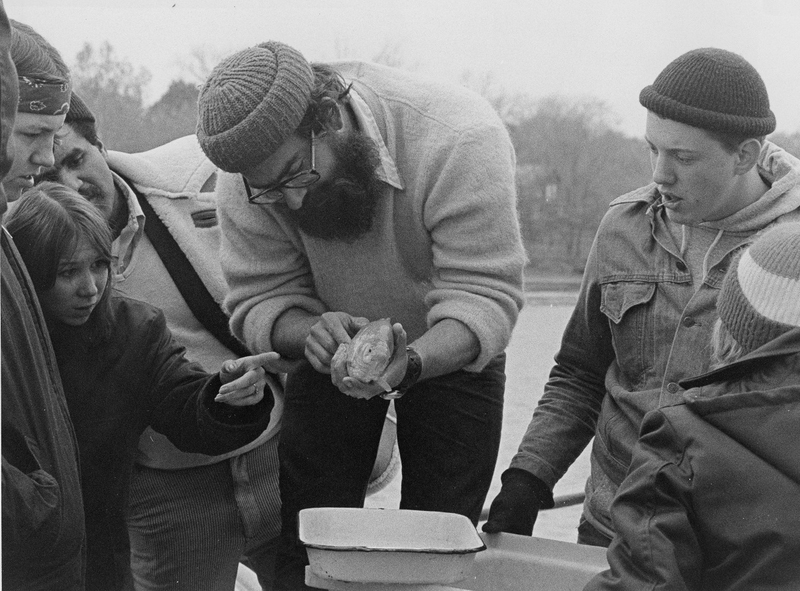 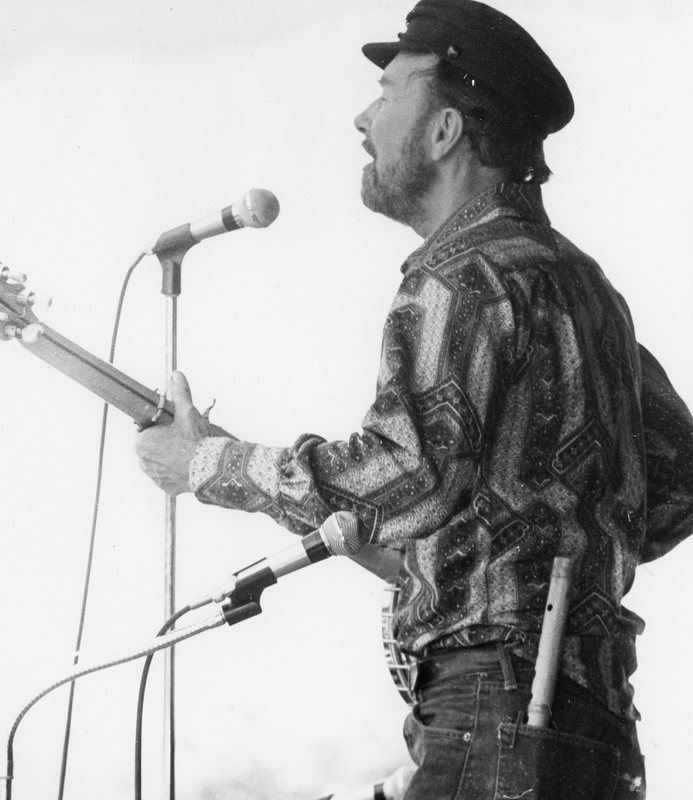 The Power of Music

Pete Seeger used music to affect change on topics as diverse and urgent as workers’ right and labor unions, segregation and Civil Rights, the Vietnam War, and the environment, for all of his adult life. Since the maiden voyage, fundraising concerts have been an important part of Clearwater’s mission and Pete’s legacy. Clearwater’s Great Hudson Revival music festival at Croton Point remains today the main fundraiser and promotional event of Clearwater’s annual calendar. Pete died on January 27, 2014 at the age of 94. His legacy lives on. 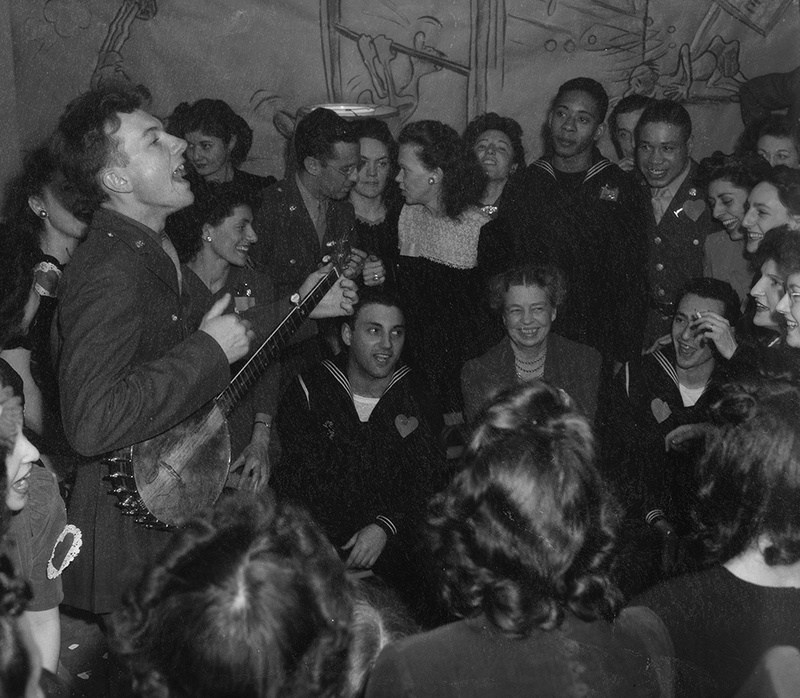 A young Pete serenades Eleanor Roosevelt and other on Valentine's Day, 1944, at a new integrated labor canteen in Washington, D.C. Library of Congress. 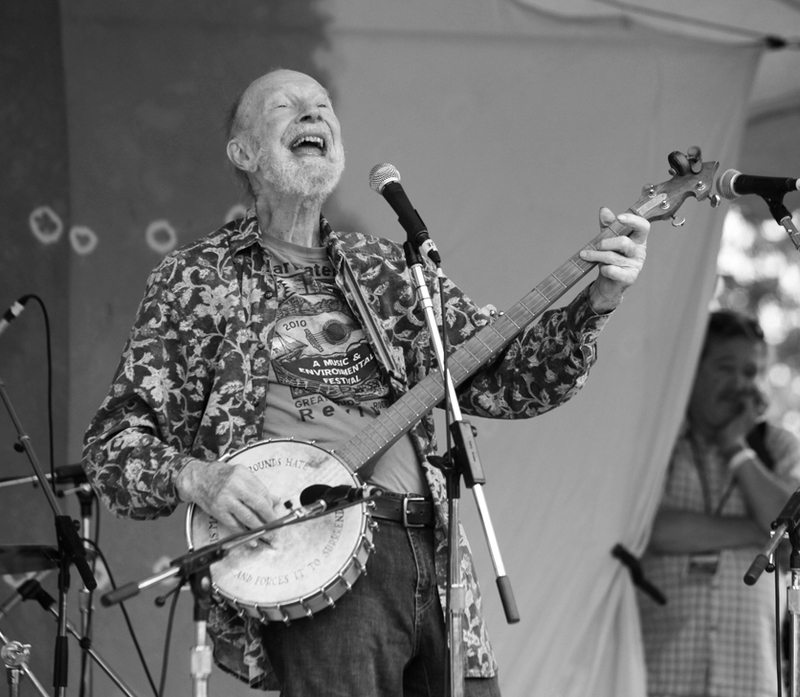