Resistance: Runaways and the Kingston Conspiracy 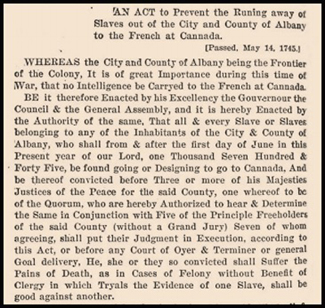 Although slave masters of the 18th century boasted of how well treated and content their slaves were, life for the enslaved African living in the North was harsh, tedious and unrewarding. The hope of attaining freedom inspired hundreds of slaves to risk the perils of running away and live a fugitive life. Living on the run was dangerous in itself, but if caught, a fugitive slave could expect punishments ranging from flogging, amputation of limbs or death. In May of the year 1775 an Act was passed to prevent slaves from running away to Canada. If convicted of trying to escape to Canada the penalty was "he, she shall suffer the Pains of Death." The owner of said slave would be compensated for their financial loss "not to exceed the sum of five pounds".

Slave masters in some rural areas, Marlborough, specifically, used unusually harsh methods to deter their slaves from running away. According to Charles H. Cochrane's, The History of the Town of Marlborough, Ulster County, New York: From the First Settlement in 1712 by Captain Wm. Bond to 1887:

"Those that could afford it kept slaves, and each owner put a mark upon his black servants, and registered the same with the town clerk, in order that runaways might be more easily traced. For instance the mark of Mathew Wygant was 'a square notch of ha'penny on the upper side of the left ear'. This was previously Abraham Deyo's mark, but in purchasing Deyo's slave or slaves, Wygant evidently adopted it to avoid remarking the poor blacks." (p.85) 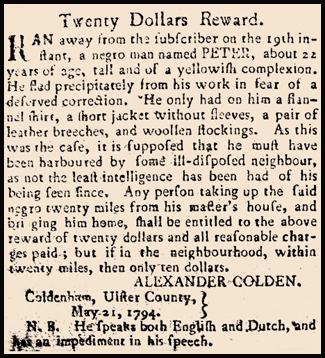 Runaway slave notices are some of the earliest clues we have as to the interior lives of slaves living in New York during the 18th and early 19th century. These notices often revealed the ethnicity, work culture, languages spoken and appearances of enslaved Africans. Often a slave's religious beliefs as well as personal habits were noted.

The greatest amount of information found in runaway notices is the outerwear worn by slaves. The clothing stated in these notices reflected the deprived existences they led. Slave masters recall styles of clothing, including the color and material the clothing was made of, hairstyles and types of headwear in great detail. This was crucial information since most fugitive slaves ran away with only one set of clothes.

Some of the comments made by masters in these notices reflect the mistreatment of their slaves. In this notice Alexander Colden, grandson of Cadawaller Colden, Governor of NY, mentions that his slave Peter "fled precipitately from his work in fear of a deserved correction." One can only surmise what the term "correction" might entail. 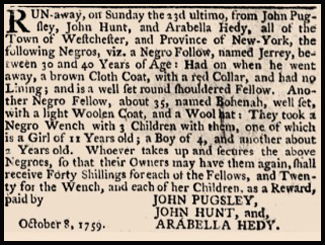 Many enslaved peoples ran away together, as was the case of Jerrey and Bohenah of Westchester, New York in 1759, bringing along with them a young mother and her three children. No matter their age, sex, or handicap, it is clear the drive to flee the brutality they endured as enslaved peoples was well-founded, and they exhibited great strength on the tough journey ahead.

Through runaway slave notices, we are able to form individual and group portraits of 18th and early 19th century African American slaves. We find restless, tired young men and women fed up with the psychological and physical maltreatment they were forced to endure as enslaved people.

← Following the Death of an Enslaver
The Society for Negroes Unsettled →
Resistance: Runaways and the Kingston Conspiracy