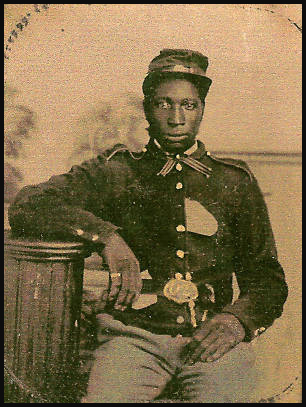 Richard Oliver (image on left) enlisted in the 20th United States Colored Infantry during the Civil War, he hoped he would be returning to his wife Ann and their two children, Maggie and James. Richard almost made it home, but succumbed to malarial fever aboard the steamship Northern Lights, just 18 days after being discharged from his service. With the help of Joan Miller, Richard Oliver's great, great granddaughter, we have been able to construct a timeline of their family going back to slavery. Carrying Huguenot and Dutch surnames such as Freer and Brodhead, this family's heritage has been intertwined, for better or worse, with the histories of families descended from the original colonial inhabitants of this region. While the fates of their enslaved ancestors can now be somewhat unearthed, this family's heritage remains chained to this region, far away from where their African roots are buried.

View all items about Richard Oliver