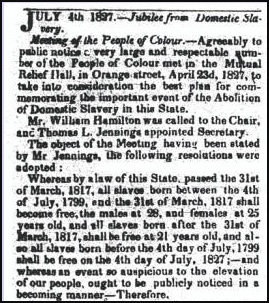 An announcement was made on July 4, 1827 that there was to be a jubilee celebrating the emancipation of domestic slavery a year later on July 4, 1828. Following the laws of gradual manumission for New York state, emancipation would finally be enforced by 1828. In response, the jubilee was to celebrate freedom on the 4th of July, 1828.

Meeting of the People of Colour. - Agreeably to public notice a very large and respectable number of the People of Colour met in the Mutual Relief Hall, in Orange street, April 23d, 1827, to take into consideration the best plan for commemorating the important event of the Abolition of Domestic Slavery in this State.

The object of the Meeting having been stated by Mr. Jennings, the following resolutions were adopted :

Resolved, That we will celebrate the 4th day of July next, as a Jubilee of emancipation from Domestic Slavery.

Resolved, That the different religious congregations of the People of Colour, be recomended [sic] to have prayers and thanksgivings in their different churches on the morning of the 4th day of July next; and that we also have an Oration on that day by a suitable person to be  [cannot read] appointed.

Resolved, That in order to carry the foregoing resolve into effect, there be appointed a committee of seven persons to select a suitable person to address us on the 4th July next, and also to make suitable arrangements for celebrating that day.

Resolved, That the object of our celebrating the 4th day of July, being to express out gratitude for the benefits conferred on us by the honorable Legislature of the state of New York, we shall do no act that may have the least tendency to disorder; we will abstain from all possessions in the public streets on that day.

Resolved, That the proceedings of this meeting signed by the Chairman and Secretary, be published in the Freedom’s Journal.

Agreeably to the above resolutions, there will be an address delivered in the African Zion Church, corner of Church and Leonard sts. on the 4th day of July inst., service will commence at half past 1 o’clock.