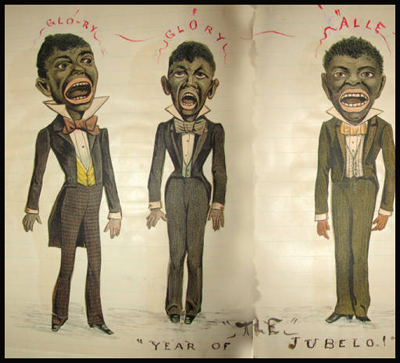 Stemming from a gross interpretation of Charles Darwin's theory of evolution and survival of the fittest, Americans of African descent were often viewed as merely less evolved human beings. Their enslavement was, thus, often justified through the belief that the Africans, as well as the other races of the world with a darker complexion, were inherently inferior to white, more highly evolved Americans of European descent. As seen in the 19th century pseudo-science of craniometry, the physical attributes of a person, including the bone structure of the skull, were measured and used to affix them into arbitrary racial classifications, and along with it certain intellectual limitations. The perceptions of these racial stereotypes, believed to be in direct correlation with level of intelligence, were seen in the most mundane references to early African-Americans, in letters, newspapers, and most condemning, in sketches and illustrations. In this drawing by Kingston resident, Nathaniel Booth, we see the stereotypical interpretations of African-Americans that precipitated the views held by many Americans of European descent of the period, and aided in the perpetuation of the subjugation of African peoples.

Equally as ignorant in its conception is this sketch by Alfred Hasbrouck, also denoting typical misconceptions of early African-Americans.

There were, however, those among the white population who, through interaction with African-Americans, came to hold a less condemning view of African-Americans. Such is the case of Johannes Lefevre who, as seen in his letters, came to realize the ignorance in his preconceived notions.

This photograph is presented here as part of an historical collection. Frequently, the habits and viewpoints of an earlier generation can be troubling, embarrassing, or even offensive in modern times. Usually, negative stereotypes reflecting racial and/or gender issues are represented in less-than-flattering images.

View details of this image

View all documents and images 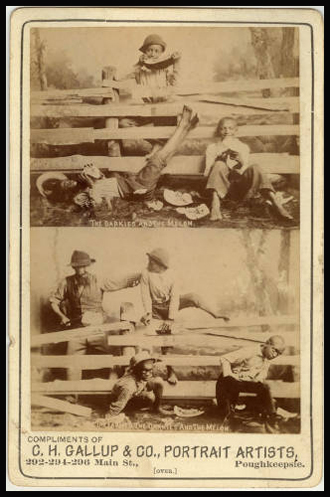 View details of this image.

← The Negro Question
For Educators →
Attitudes and Stereotypes