Sailing Into the Future

"Oceanbird full view," 2021. The Oceanbird is yet to be built, but incorporates many of the lessons about wing sails learned during and after the 1970s oil crisis. If successful, the design should reduce engine and fuel use by up to 90% compared to similar conventional motor vessels. The wing sails are tall enough that they must be designed to telescope into themselves to cross under most bridges, and the vessel's launching will likely answer many engineering questions which remain about the maximum possible size of a wind-powered ship. Courtesy of Oceanbird.

The future of sail freight doesn't need to be exactly like its past. New technologies, knowledge, and materials can make future sailing ships safer and more capable than those of a century ago. No sail technology is perfect. Just like the traditional rigs they may replace, new sail types have advantages and disadvantages based on conditions and use. 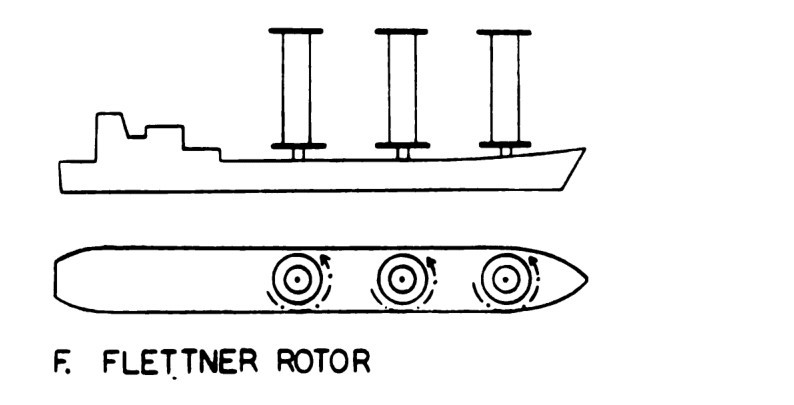 Flettner Rotors were developed in the 1920s, but were not installed in any number of ships until recently. They take up very little deck space, and handling the sails is completely automatic: Tacking or jibing is as simple as changing the direction of rotation. They work based on the Magnus Effect: air moving around a rotating object is slowed on one side and sped up on the other, creating lift which is used to propel the ship. These sails have two weaknesses: They require electricity to spin, and efficient propulsion relies upon steady wind blowing at right angles to the ship’s heading. 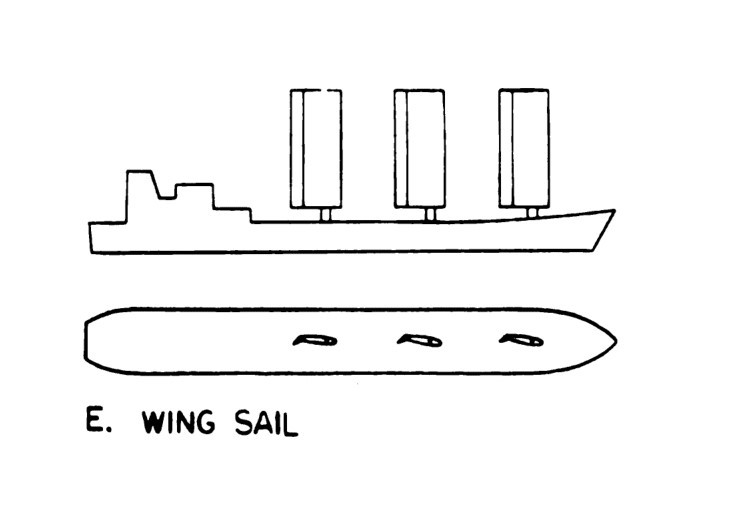 Wing Sails use lessons from aviation to propel a ship. These large hollow metal wings extend upward from the deck, and are trimmed automatically by electric motors. Wing sails are more effective at sailing upwind than most other rigs, but perform poorly if the wind is coming from behind the ship.

JAMDA (Japan Marine Machinery Development Association) rigs were developed in Japan as an automated rig during the 1973-85 Oil Crisis. Installed on a dozen ships, these rectangular steel frames with bowed rigid skins perform well in a variety of wind conditions. They are completely automated, generate a large amount of thrust, take up little deck space, and can fold for loading cargo. However, they do rely on electrical power for trim and handling.

RETROFIT OR NEW? EITHER WILL DO!

There have been many successful retrofit projects to create sail freighters from motor vessels, from Oil Crisis Era projects, to the currently-operating SV Kwai in the Marshall Islands. Traditional sailing rigs can give small cargo vessels large gains on fuel efficiency, and acceptable performance under sail alone.

Many sail freighters today are restored old ships: Apollonia, Hawila, Tres Hombres, Nordlys, Brigantes, Kwai, and De Tucker are all restorations. New and restored sail freighters like these are starting to launch mostly in the south Pacific and Europe. Ranging from very small to mid sized, they are designed to work under sail except in harbors. Some have electric or hydrogen engines and won't use fossil fuels at all. 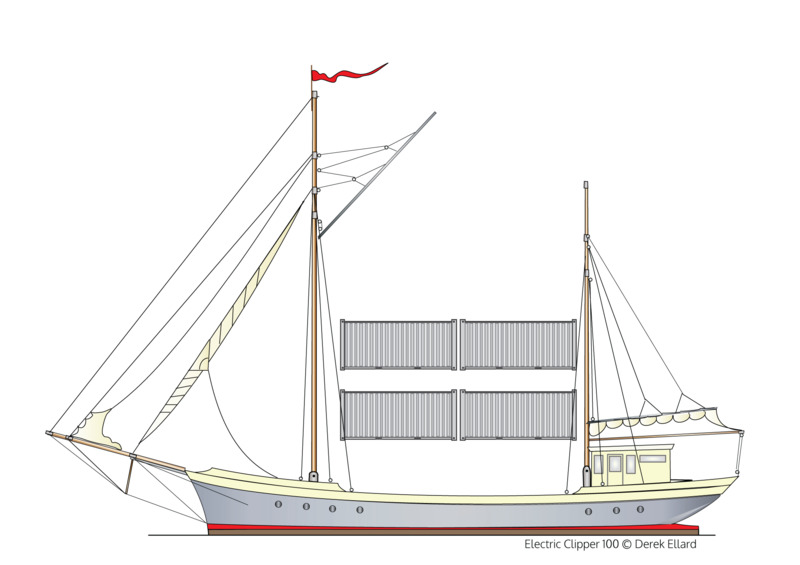 "Electric Clipper 100 With Containers" Derek Ellard, 2021. The Electric Clippers, designed by Derek Ellard, combine traditional sail and hull plans and technology with electric engines, shipping containers, and automation where possible to gain the benefits of both new and old technologies. Designed with a shallow draft and folding rig for accessing small ports and passing under bridges, his smaller designs are well suited to coastal and island trade. These ships are also designed for production on a mass production model, enabling them to be rapidly adopted worldwide.

Shipping containers are now the standard for global cargo movement. Although traditional sailing vessels cannot accommodate them, modern windjammers can be designed to work with containers. Derek Ellard's Electric Clippers make traditional rigs and hull shapes compatible with containers. Combining the best of traditional working sail and modern technology is not only possible, but more useful than either alone.

← Modern Windjamming
What Would It Take? →
Sailing Into the Future