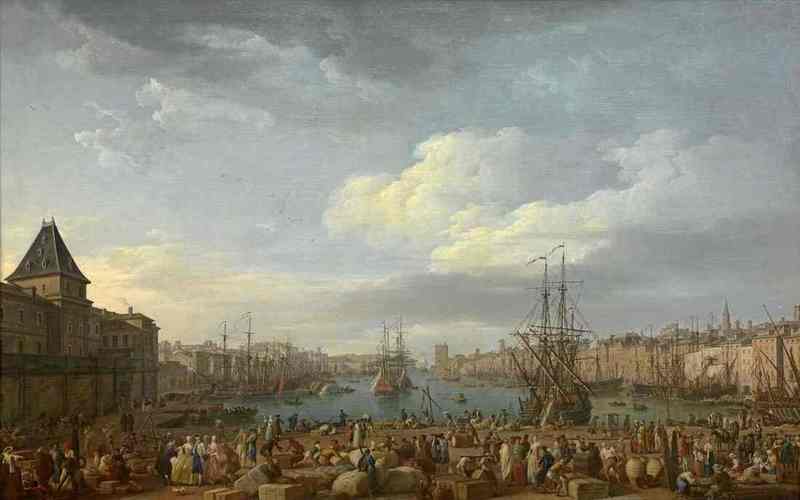 Humans have moved grains since time immemorial. This is partly because they're so easy to move, and don't require any other condition than dry storage for keeping. For the vast majority of the history of food, it was moved sustainably, but we're going to focus on both grains, and their long-distance transportation for this article.
​

Why do we move grains to begin with? The main answer is land availability. Clearly, cities don't have the wide expanses of land needed to grow cereal crops, which historically constituted the major part of most people's diets. Also, grains require little more than a dry place to be stored, with varying techniques used to make storage pest-proof, ranging from granary foundation designs to the pseudo-domestication of cats. As a result of easy storage and transport, grains are a perfect food to move from growing regions all around the world to where the price is better, and usually where the population is denser.

The other reason is water resources, as explored by Dermody et al. Areas with sufficient water can grow a large surplus of grains, and areas with stressed water resources can then import them as a way of conserving their own water. Taking grains from the water-rich Nile valley to the water-poor regions of Rome, for example, drastically increased the carrying capacity of the city.

In the Bronze Age Aegean, while there was some trade by sailing vessels in things like grains, mostly highly valuable cargoes of wine, metals, and glass made long-distance journeys. Navigation was difficult, required a high level of skill and specialization, and the additional element of multi-lingual crews and captains to communicate effectively with foreign trading partners. As this was a mostly pre-literate society, these circumstances created a barrier to long distance trade in bulk goods, but in short distance trade these commodities were moved routinely. In Egypt, for example, canals were dug to move grain more efficiently on boats around the Nile Valley and Suez peninsula.

As far back as the Roman Empire, we have documentation of a complex, highly efficient, and critical grain transportation network. The entire Mediterranean basin produced surplus grains which made their way to Rome, the largest city before the industrial age. With over a million inhabitants, Rome could not be supported by its own surrounding countryside, and was fed by grains from Tunisia, Egypt, Syria, Sardinia, Anatolia, and Gaul, as much as it was by any foods grown on the Italian peninsula.

Vast networks of ships plied the "Mare Nostrum" with some of them carrying as much as 500 tons of cargo, while most were closer to 100-150 tons. Most cargo vessels in the Roman world were powered by sail, but a significant proportion were powered by enslaved humans operating oars. As the Roman Empire declined, so too did the grain trade in its former territories.

The next large rise in Grain Trade came in the 17th century, at the dawn of the age of sail. As global empires rose once again in the West, and cities became far larger than they had been in the middle ages, the need for shipping capacity increased. More modern vessels, such as early Sloops, Schooners and other sailing Ships were being developed alongside the navigational tools which allowed for safer and more reliably repeated voyages into open ocean. This led eventually to a thriving Trans-Atlantic trade which involved large amounts of grain moving from North America to the Caribbean Sugar Islands and to European destinations. Locations such as New York, New England, Pennsylvania, and the Carolinas supplied Wheat, Rye, Barley, and Rice to this trade, which increased through the 19th century. Eventually this trade was taken over by "Conventional" steam and oil powered ships through the 20th and into our current century.

There are some lessons for food systems and sustainable transportation today in the grain trade of the past. As with the discussion of trade in water resources  mentioned above, we should examine our agricultural systems carefully. It may not be sustainable to export water-intensive crops from the desert Southwest to the temperate, water-rich Northeast, for example, no matter how zero- or negative-emissions the means of transport itself might be.

You can read more about the balance of grain and water trade in the Roman World in Dermody Et Al's 2014 paper here.

Grains, as we've seen, were historically and are today a very important agricultural commodity, transported around the world. The 18th century is an especially important time for Grain Shipments in the Northeast, as the current 8-state region in which this competition will take place was producing a large amount of grain exported all around the Atlantic World.

New York sent large amounts of Flour and grains to the West Indies, alongside fish, vegetables, timber, and fruits. As the West Indies were essentially a monocrop sugar plantation run entirely with enslaved labor, they needed to import everything from elsewhere. Corn, wheat, and other grains were also sent to the Carolinas from New York, as explained in Peter Kalm's "Travels in North America." Additional grain trade to Europe took place from New York harbor.

New England also sent large amounts of grains as exports, though less wheat as conditions were not as favorable for growing it as they were in the Mid-Atlantic colonies. However, grain was shipped from New York and New Jersey into the New England colonies and States, while Fish remained a major regional export. Coastal trading in farm surpluses did include a significant quantity of corn and flour moving into cities such as Boston and being sold there.

In Charlestown, NH, the record books of Phineas Stevens' store in the 1740s and 1750s show many debts being paid off in Corn, which Stevens then shipped South into Massachusetts and Connecticut for sale in more densely populated areas. It was moved normally by Canoe down the Connecticut River, then by wagon from the river to a warehouse. The easy cultivation and transportability of grains, alongside their market value in cities made them a good cash crop where few others were available.

Aside from the scattered records of individual ships, companies, and ports, there is little to trace direct shipments and the volume of trade in grains, but it was certainly considerable. In many ways, it was Fish, Flour, Rum, and Timber which pervaded the export economy of the Northeast, and were sold to the entire Atlantic World. Domestically, a large amount of grain cargo was moved, whether by pack animals, carts, canoes, or ships. These exports then paid for manufactured goods such as glass, lead, paint, tea, coffee, paper, and others. Taxes on many of these imported goods would lead to grievances over the long term, which eventually spiraled into the American Revolution.

Grain in the 18th century was a very important commodity and remains so today. Then as now, the ability to export grain or the need to import it is a tool of foreign policy at peace and in war. While the Northeastern Economy is no longer based primarily on fishing and grains, there is a long tradition of producing and moving grains in the region on which we can draw as we move towards a carbon-constrained future.