Prior to the opening of the borders, Japanese “commoners” had to obtain a travel certificate (orai tegata), usually from their village’s dignitaries. The samurai class would apply for a ‘gate certificate’ (sekisho tegata). These certificates were essential for travel to make it past various checkpoints. These weren’t used for identification of the bearer, but rather to state their purpose for travel. The sekisho tegata frequently did not include the bearer’s name.

In 1866, with the lift of the overseas travel ban, the new Japanese passport system was an attempt to replicate the Western system, using samples acquired from French and American diplomats. This led to a new passport format, including a description of the bearer. The primary purpose was to regulate Japanese citizens who traveled outside of the country, as there was concern with travelers damaging the reputation of Japan.[22]

For early missionaries, travel was restricted beyond the treaty ports; special passports were required stating the purpose of travel was for health or scientific investigation.[23]

Travel documents for missionaries like Mary included names, addresses, occupation, age, and purpose of travel. Below are images and a translation of Mary Deyo's Passport, issued in 1899. 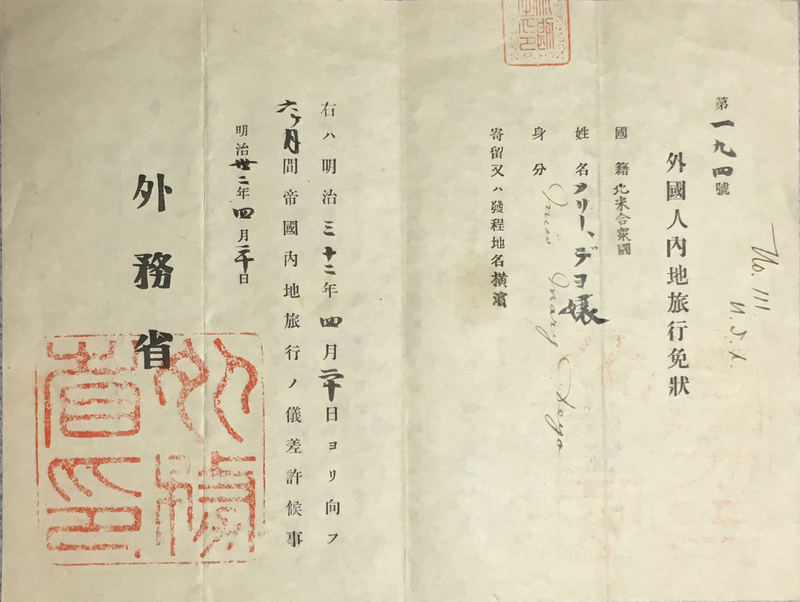 No. 194
Passport for Foreigner in Japan
Nationality: the United States of America
Name: Miss Mary Dayo
Status
Place of Stay or Departure: Yokohama

The person whose name is written on the right page is allowed to travel in the Empire of Japan for six months starting on April 20, 1899.

Seal of Minister of Foreign Affairs

Travel Rules for Foreigners in the Empire of Japan

Article 1: Those who travel in this country should observe the local rules of the area they visit.

Article 2: After this permit expires, this must be returned to the Ministry of Foreign Affairs as early as possible.

Article 3: If a local government officer, a police officer or an inn keeper needs to inspect your passport during your travel, you must show it absolutely. Those who fail to show the passport for whatever reason can be asked to leave this empire from the nearest port immediately.

Article 4: The use of this passport is restricted to the person whose name is written in the passport. Do not let others use this passport.

Article 5: Nobody is allowed to deal or execute with the person whose name is written in the passport in this empire.

Article 6: The person who holds this passport is not allowed to rent or stay in any residence.

Article 7: The person who holds this passport is not allowed to hunt games outside the designated area even if this person has a hunting permit.

Passports in the United States

While passports weren't a new idea, needing a passport for border crossing as a form of identification was still relatively new in the United States in the 1880s. At this time, passports looked more like certificates, not the booklets we are familiar with today.[24]

Mary Deyo’s correspondence suggests that, as she planned her first voyage to Japan in 1888, obtaining a document that allowed her to enter Japan and move freely in accordance with Japanese law was complicated.

The following is a transcription of Solomon’s letter discussing his efforts to obtain a passport for her in America and the difficulties he was encountering. 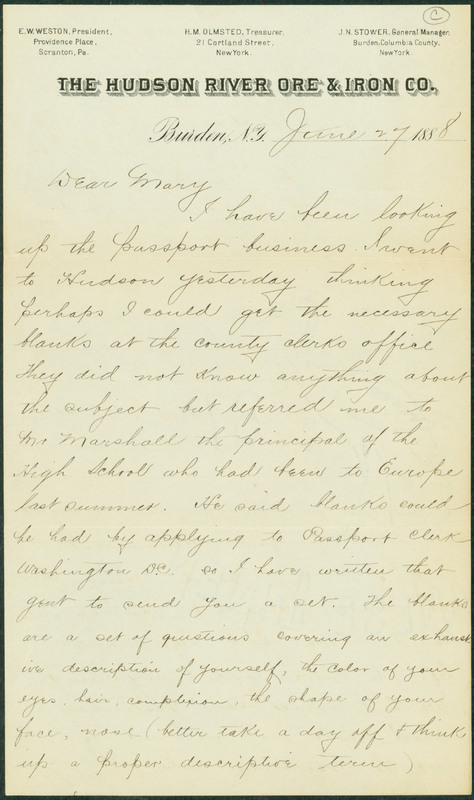 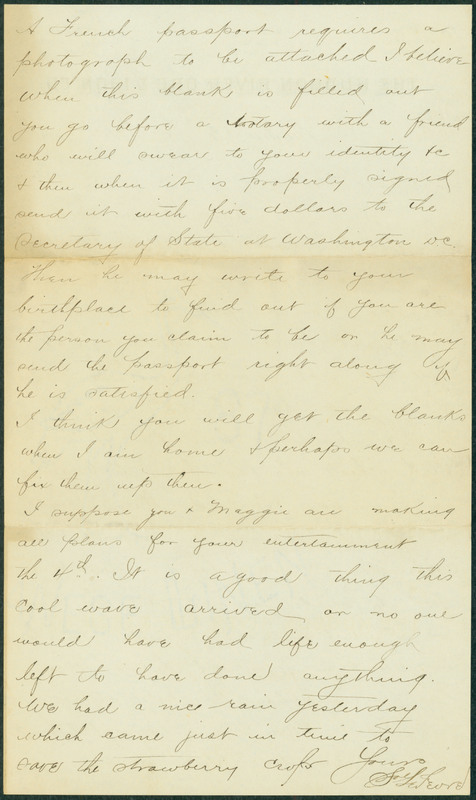 Dear Mary,
I have been looking
up the passport business. I went
to Hudson yesterday thinking
perhaps I could get the necessary
blanks at the county clerks office.
They did not know anything about
the subject but referred me to
Mr. Marshall the principal of the
High School who had been to Europe
last summer. He said blanks could
be had by applying to Passport clerk
Washington D.C. so I have written that
gent to send you a set. The blanks
are a set of questions covering an exhaust-
ive description of yourself, the color of your
eyes, hair, complexion, the shape of your
face, nose (better take a day off & think
up a proper description term)

A French passport requires a
photo to be attached I believe.
When this blank is filled out
you go before a Notary with a friend
who will swear to your identity etc
and then when it is properly signed
send it with five dollars to the
Secretary of State at Washington D.C.
Then he may write to your
birthplace to find out if you are
the person you claim to be or he may
send the passport right along if
he is satisfied.
I think you will get the blanks
when I am home and perhaps we can
fix them up there.