Mary Deyo arrived in Japan during the Meiji period (1868-1912). Considered the beginning of “Modern Japan,” this era saw many cultural changes in the country.

Prior to the Meiji Period, the rulers of Japan were the Shogun, hereditary military dictators who had led the nation since 1192. From 1638 to 1854, the Shogun closed the nation to the outside world with the exception of designated trading ports. The only Westerners allowed in were the Dutch, but with many restrictions.

The two main religious faiths in Japan were Shinto and Buddhism. Shinto is a localized faith indigenous to Japan. The word Shinto means “the way of the kami.” Kami generally means sacred or divine power. The word kami was used to differentiate Shintoism from Buddhism in the 6th century.

The Shogun saw Christianity and the missions as a political threat and a threat to the country’s unity, leading them to ban Christianity in 1638. This ban forced Japanese Christians to practice in secret. The ban was relaxed in 1720, allowing some scholarly study of the religion with Western books. However, practicing the faith was still hidden, and the ban on Christianity was only lifted in 1873.

By then, centuries of Shogun rule had come to an end. An important step down that road came in 1854, when diplomatic relations began between Japan and the United States began and Americans were allowed to reside in Nagasaki and Kanagawa. In 1859, Americans founded the first mission and Protestant Missionaries, including those from the Dutch Reformed Church, began to arrive, although their enterprise was still restricted by the government. Shinto continued to be the main religion in Japan and was made the state religion during the Meiji period.

Feelings toward the missionaries varied among the people of Japan, but grew more negative with rising Nationalist feelings, which may have caused enrollment to decrease in the mission-led schools in the 1890s. This is around the time when Mary left teaching to evangelize in Ueda, a city in Nagano Prefecture of Japan. A letter to Mary from her colleague, Shigu Nakumara, indicates a criticism of missionaries in Japan in 1895. 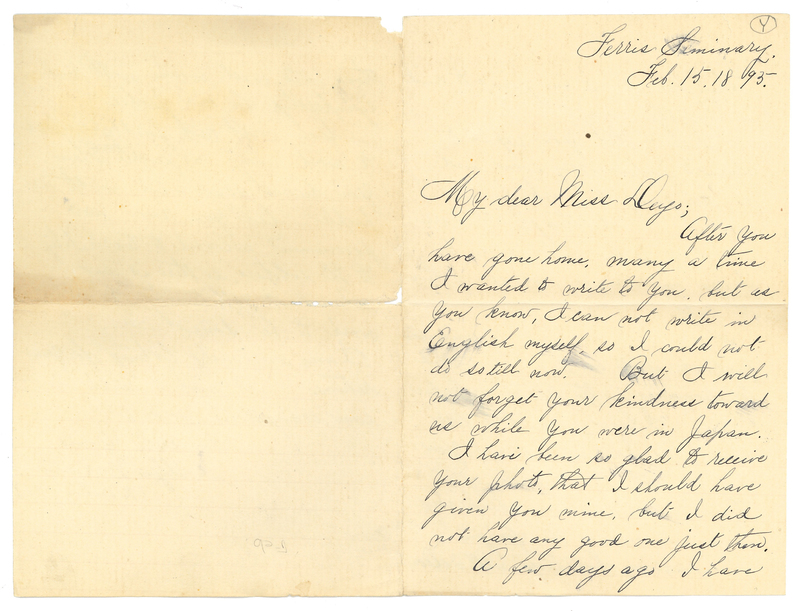 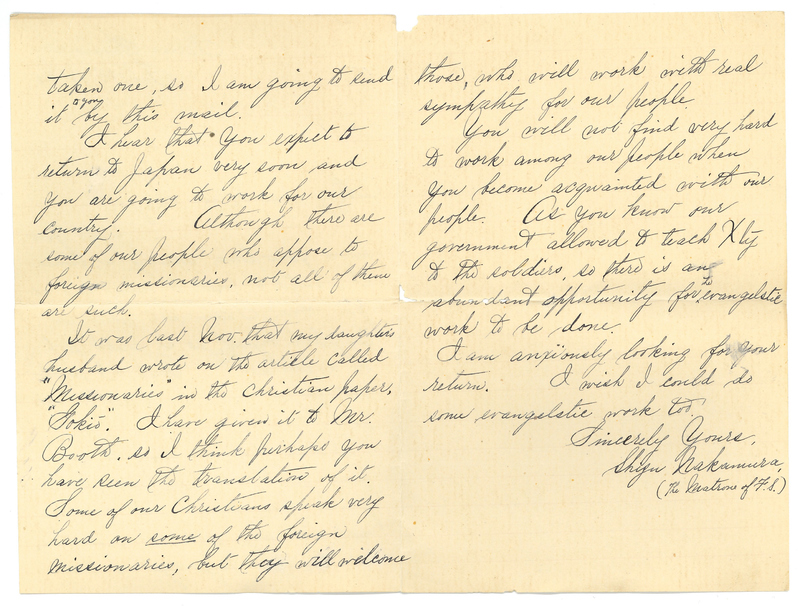 After you
have gone home, many a time
I wanted to write to you, but as
you know, I can not wrtie in
English myself, as I could not
do so till now. But I will
not forget your kindness toward
us while you were in Japan.

I have been so glad to receive
your photo, that I should have
given you mine, but I did
not have any good one just then.

A few days ago I have
taken one, so I am going to send
it ^to you by this mail.

I hear that you expect to
return to Japan very soon and
you are going to work for our
country. Although there are
some of our people who appose to
foreign missionaries, not all of them
are such.

It was last Nov. That my daughter’s
husband wrote on the article called
“Missionaries” in the Christian paper,
“Yokio.” I have given it to Mr.
Booth so I think perhaps you
have seen the translation of it.

Some of our Christians speak very
hard on some (underlined) of the foreign
Missionaries, but they will welcome
those, who will work with real
sympathy for our people

You will not find very hard
to work among our people when
you become acquainted with our
people. As you know our
government allowed to teach Xly
to the soldiers, so there is an
abundant opportunity for ^to evangelistic
work to be done.

I am anxiously looking for your
return. I wish I could do
some evangelistic work too.