Jacob’s ability to buy land in 1851 and build a home eventually led to another advantage for him–the legal right to vote, as demonstrated by his inclusion in New Paltz’s voter registration lists starting in 1858. Based on a New York State law passed in 1821, in order for a Black man to vote he needed to own property valued at $250 or more (the state dropped this requirement for white men). In the mid-1800s, Jacob was among a small number of African-American men whose property values made them eligible to vote in New Paltz, including his brother John and also John Hasbrouck. John Hasbrouck was believed to be one of the first Black men eligible to vote in New Paltz. He was preceded by Caesar DuBois, who appeared on the November 1840 voter poll list for the town of New Paltz.[1]

The 1858 voter registration list (and those of other years) included columns for various elections, such as state, assembly, judiciary, and school commissioner. Check marks seem to have been added as each man voted in a particular contest. Based on these check marks and those appearing for other years, the Wynkoop brothers and John Hasbrouck seem to have faithfully exercised their legal right to vote once they met the property qualification. Still, a desire by some to suppress the black vote was apparent in the community (as it was elsewhere in the state). Charles Ackert, the New Paltz Times editor who wrote so positively about Black soldiers during the Civil War, had stated in an editorial in 1860 that the idea of allowing all Black men to vote, as white men could, was “repugnant.” Later that same year, an amendment to end the property restriction for Black men in New York State was voted down statewide with 63.6% of New York voters opposing it. In New Paltz, the percentage voting against the amendment was even higher at 86.5%.[2] 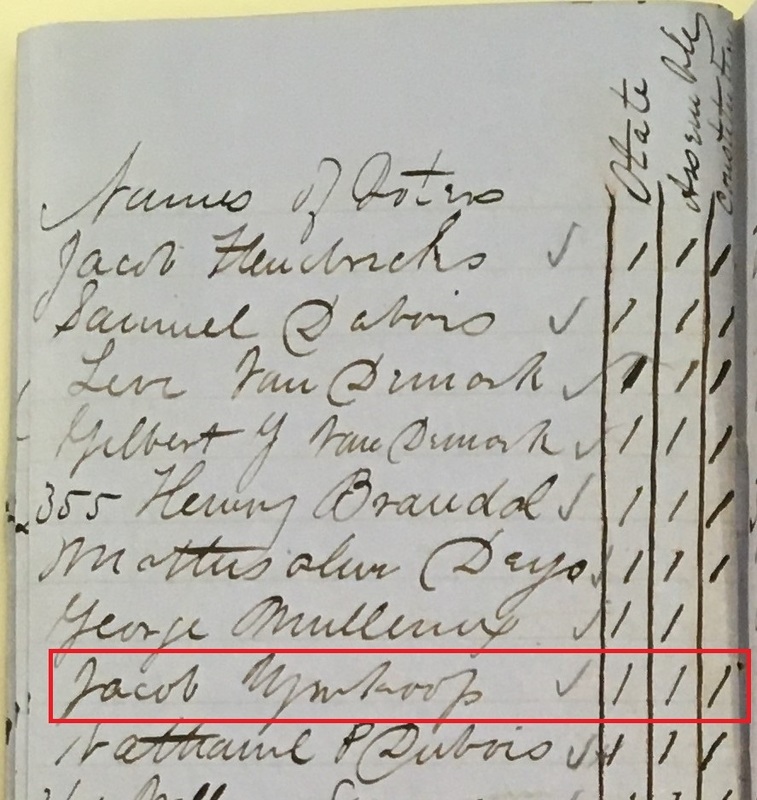 In 1870, the nation ratified the 15th Amendment to the U.S. Constitution, which was intended to guarantee all male citizens of the nation the right to vote, regardless of race or property ownership. The Republican Party (“The Party of Lincoln”) was eager to enlist new Black voters and apparently did so successfully in New Paltz. According to the New Paltz Independent (the local Republican newspaper), twenty “colored men” cast their votes in the November 1870 election, and all but one or two voted the Republican ticket. Black turnout in New Paltz for this election was especially impressive when you consider the total population of Black men was 47.[3] 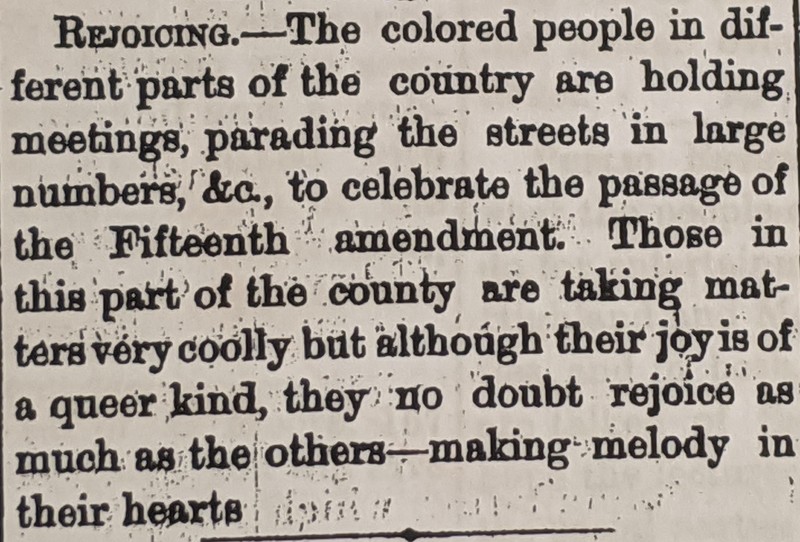 Jacob seems to have been at the forefront of black political engagement in New Paltz in the 1870s. To support the election of Republican candidate Rutherford B. Hayes to the presidency in 1876, Jacob and Charles Moody, a Black barber and farm worker who had escaped the South after emancipation, formed a “colored Republican club.” Black members of the community hosted political meetings in their homes and promoted Hayes for president, marching in weekly political parades in New Paltz.[4]

Both courtesy of the Haviland-Heidgerd Historical Collection, Elting Memorial Library.

Moody was among a new group of African American families, many having been enslaved in the South, who settled on Pencil Hill on the south side of the Village. An African Methodist Episcopal (A.M.E.) Zion Church was established there in 1871. The A.M.E. Church (originating in New York City around 1800) greatly expanded in the U.S. at this time, helping to build community and develop leaders among free Black populations. Church activities were central to the lives of many Black citizens of New Paltz. Jacob’s brother John was a Trustee of the Church and led prayer meetings, while Jacob built the congregation’s Parsonage in 1883-84.[5] 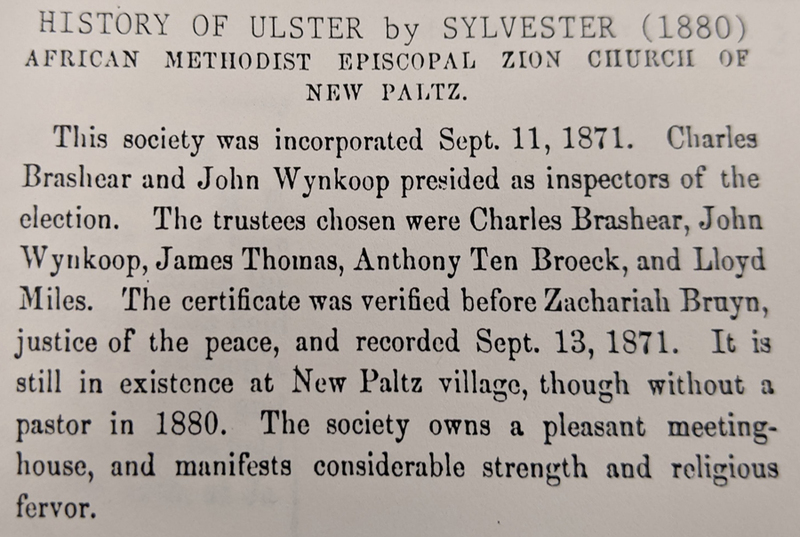 Both courtesy of the Haviland-Heidgerd Historical Collection, Elting Memorial Library. 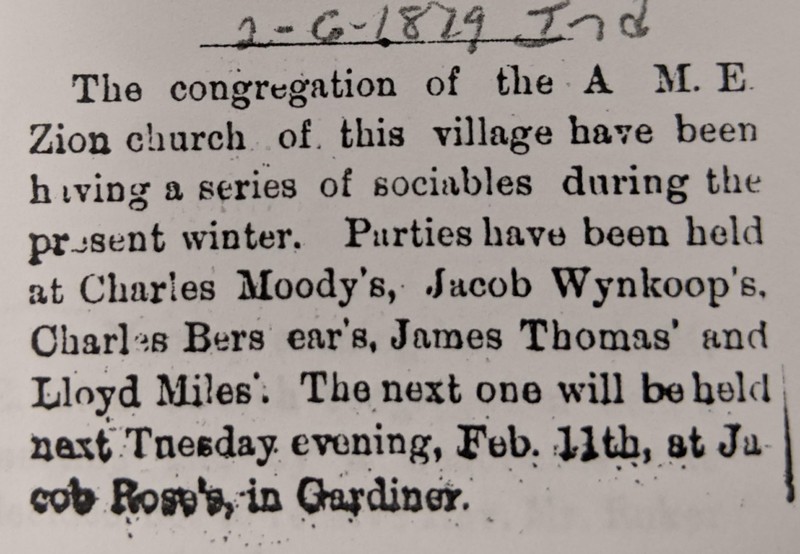 Participants mentioned in the clipping at left include Jacob's daughter, Mrs. I. Walker, his grandson George Walker and granddaughter Emma Walker, friends and eventual neighbors Maggie and Augustus Freer, as well as other friends the Roses, Moodys, and LeFevers.Â

Grand Army of the Republic

Jacob’s participation in yet another local organization certainly added to his stature in the community. In 1883, he signed a charter with a dozen or so other men to establish the local post of the Grand Army of the Republic (G.A.R.), a fraternal organization of Civil War veterans. Charles Ackert was named commander. The G.A.R. was one of the first advocacy groups in American politics, promoting and supporting a variety of causes, including voting rights for Black veterans and lobbying for veterans’ pensions. Jacob was very active in the G.A.R., serving as their chaplain for more than twenty years and served as color bearer in numerous parades and other appearances across the region. In 1888, the New Paltz Times reported that “Jacob Wynkoop, the color bearer of the Eltinge Post, […] had the pleasure of shaking hands” with the famous William Tecumseh Sherman while the Union General was in nearby Kingston. In August 1890, Jacob represented the Eltinge Post at the G.A.R.’s National Encampment held that year at Boston.[6] 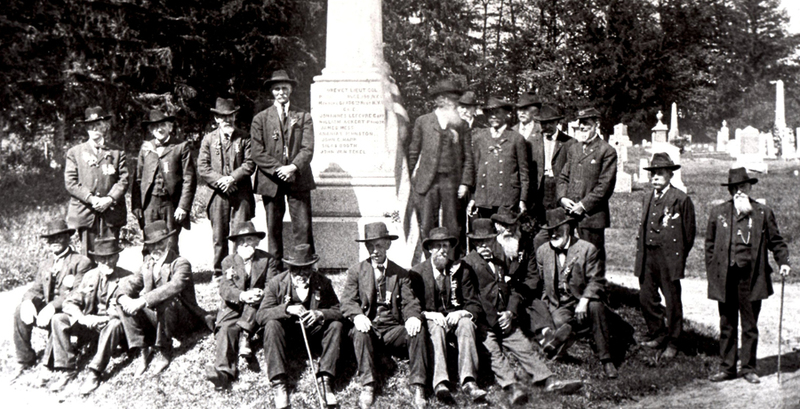