As the son of enslaved people in New Paltz, Jacob Wynkoop probably felt keenly for the plight of the nearly four million African Americans still held in bondage in the American South. He could certainly follow news of the impending conflict between North and South, which local newspapers covered extensively. Coverage only expanded after the Civil War began in April 1861. When President Abraham Lincoln signed the Emancipation Proclamation on January 1, 1863, a fight to preserve the nation became a battle for human freedom. Formal recruitment by the Union of Black soldiers soon followed, and Jacob was among them. His name can be found in the enrollment record for New Paltz in June of that year. At year’s end, age thirty-four, Jacob enlisted in Kingston to serve in the 20th United States Colored Infantry. His recruitment papers had him as five-feet, five-inches tall.[1] 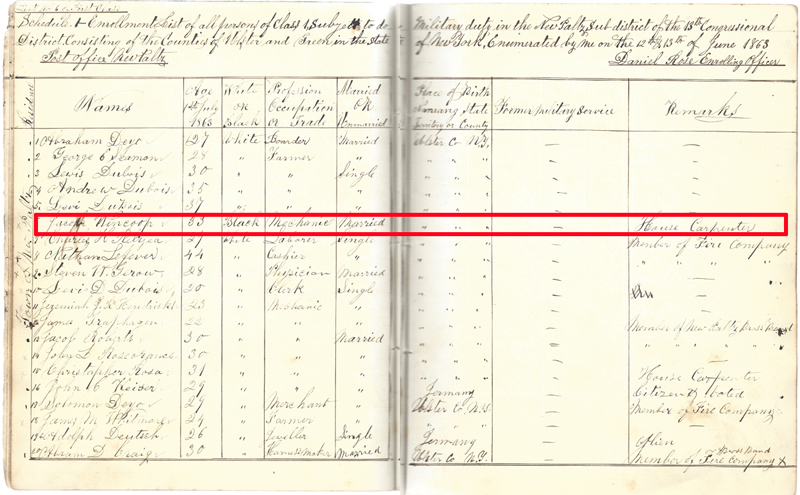 The 20th regiment was encamped at Riker’s Island in New York Harbor in early 1864 and trained there for a month. They were met with fervent support in the City. Harper’s Weekly described a day in mid-March as the regiment marched down 5th Avenue “under waving handkerchiefs,” arriving at Union Square via Fourteenth Street accompanied by “the music of drums and trumpets mingled with the loud huzzas of the great crowd.” “The soldiers had handled their muskets but five days,” the reporter observed; “but when they obeyed the ‘order arms,’ there was a solid, simultaneous ring upon the pavement, which enforced the heartiest applause … The flag of the country waved over them in benediction.”[2] 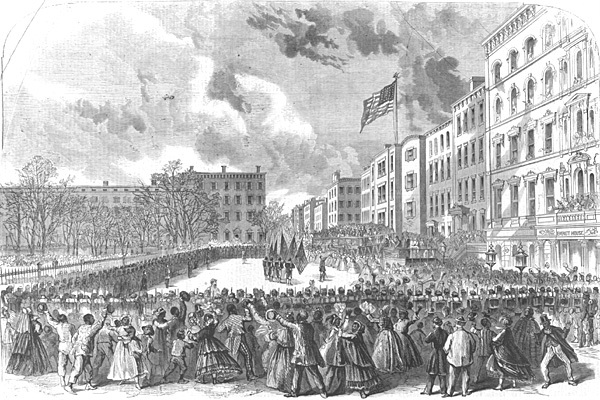 The enthusiasm for these new Black troops had much to do with the courage exhibited by their predecessors at key battles during the war, including a long and ultimately successful siege to recapture an important strategic site in Louisiana. Port Hudson, twenty-five miles upriver from Baton Rouge on a bluff overlooking the Mississippi River, was taken by the Union in July 1863. The battles to secure the fort had lasted two months, and African-American troops received high praise from army leaders and newspapers alike. The celebration of heroic acts by African American soldiers fostered recruitment of free Blacks in the North, like Jacob Wynkoop. Enlistment records show that several Black men from Ulster County also served in the Civil War, including Richard Oliver of New Paltz.[3]

Jacob arrived with the 20th Colored Infantry in Port Hudson almost a year after the widely publicized battle, and was therefore spared its dangers. However, the regiment’s role in protecting the fort would have been important. The New Paltz Times’ editor, Charles Ackert, had served as a soldier-reporter in Port Hudson during the siege and gained respect for Black soldiers serving the Union. Back in New Paltz in April 1864, Charles Ackert reported receiving a letter from Jacob at Port Hudson. The editor noted that Jacob and the other “black boys who enlisted” were doing well. The 20th Colored Infantry also saw duty in Texas, Florida, and Tennessee. They were mustered out in October 7, 1865, five months after the war ended. Jacob returned to his family in New Paltz. Sadly, Richard Oliver died of malaria on the steamship from New Orleans before making it to New York.[4]