In the latter half of the 19th century, the Village of New Paltz as we know it today was gradually taking shape. Commerce followed naturally along the New Paltz Turnpike coming westward from the Hudson River (today’s Rt. 299/Main Street) and continued down North Front Street. The population of the village had doubled from around 250 residents in 1863 to 500 twelve years later. By that time, there was a brick Village Hall, three churches (including the A.M.E. Zion Church), the New Paltz Academy, two newspapers, two banks, three hotels, as well as several stores and mechanic shops of various kinds. The Wallkill Valley Railroad opened a few years earlier, and plank sidewalks gave way to flagstones.[1]

In 1884, the New Paltz Academy was destroyed by fire and the State Normal School took its place. At the same time, large parcels of land on lower Main and along Church and North Chestnut Streets were divided into lots and sold for business and residential use. In 1885, John C. Brodhead created the street (now known as “Broadhead” Avenue), running eastward from Huguenot Street, intersecting North Chestnut and extending to Church Street. The next year, the New Paltz Independent proposed extending Church Street “a short distance further north as to intersect the street running east and west by Jacob Wynkoop’s,” adding “it would prove a great convenience to people living in that part of the village.”[2]

In 1887, the New Paltz Independent reported the demand for new houses continued “as great as ever.” The paper’s editor, Ralph LeFevre, was confident that the “briskness” of building operations would continue in the years ahead. In June 1888, LeFevre attributed the continued growth of the village to it being “such a delightful place of residences,” with low taxes anticipated. He also wrote of the growth of patronage to the Mohonk and Minnewaska mountain houses, orchard production in the region, and new enterprises in the village like a brickyard and creamery. However, the principal cause of prosperity, wrote LeFevre, was the Normal School, and he was confident that a new addition to the building would stimulate further growth in the community.[3] 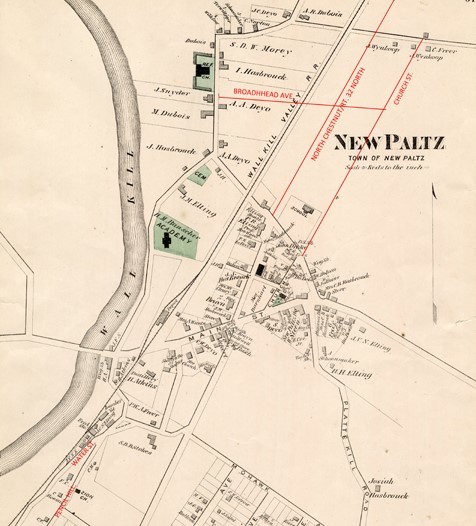 Detail from an 1875 map of New Paltz amended to show the extensions of Church and North Chestnut Streets and the addition of Broadhead Avenue after 1885. Atlas of Ulster County, Beers, 1875. The location of Jacob's and John's houses can be seen in the upper left. Courtesy of the Haviland-Heidgerd Historical Collection, Elting Memorial Library.

Click the image to see the full map and to enlarge.

Throughout his life, in most records (including census and military), Jacob Wynkoop was referred to as a “carpenter” or “house carpenter,” a position above the occupation of “laborer” assigned to most African American men in the area at the time. This distinction was certainly due to the quality work he performed for his customers and employers over the years. During the building boom in New Paltz in the 1880s, Jacob was busy working for or with several white builders, including George DePuy, a fellow G.A.R. member and head of the post’s drum corps. For example, Jacob worked with George DePuy in 1885 to begin the house on Broadhead Avenue for Mrs. Ann Oliver, the widow of Civil War soldier Richard Oliver, although George would eventually complete the project. It was common for builders to work collaboratively and for the local papers to credit specific men for laying foundations or other specialized aspects of building. The first known building credited to Jacob (other than the family homes) was the Parsonage for the A.M.E. Zion Church on Pencil Hill. The New Paltz Times reported in January 25, 1884 that work on the Parsonage was progressing steadily and stated that Jacob Wynkoop had “charge of the job.” The following summer, Jacob again had “charge of the carpenter work” for a dwelling being built for Charles Freer, a white man and cousin of Cyrus Freer. According to the Independent, the house was the fifth one put up on Church Street that season.[4] 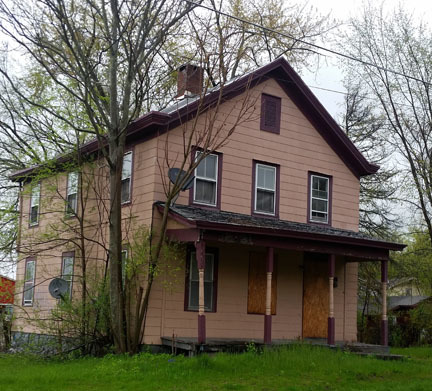 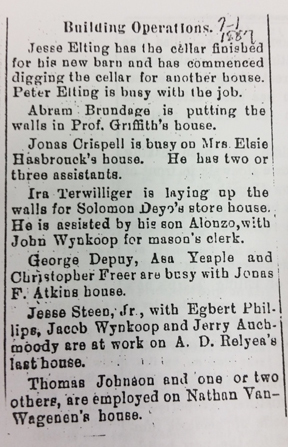 Located at 43 Church Street, the Charles Freer House not only still stands, it also retains much of its original form. Its overall style contrasts with the home Jacob built for himself and his young family more than thirty years earlier. The main portion of the house is a full two stories with an attic; the gable end faces the street, a design more appropriate for narrow village lots. The front-facing gable style would remain characteristic of Jacob’s builds thereafter; it even appeared in a two-story addition added to John’s home in 1890, and in the addition seen in photographs of Jacob’s house. The pointed attic window in this and other houses was a nod to the influence of Gothic elements on American vernacular architecture in the second half of the 19th century. The simple triangular shape at the top of the window would have required simpler tools than those needed to create the curved arches of attic windows seen on other houses in the vicinity.[5]

Also in 1886, Jacob oversaw the construction of a house for Ann Oliver’s daughter Maggie and her husband Augustus Freer.[6] 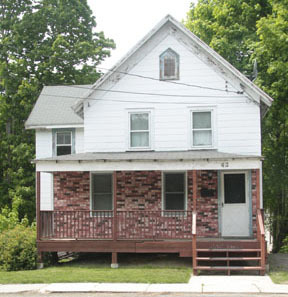 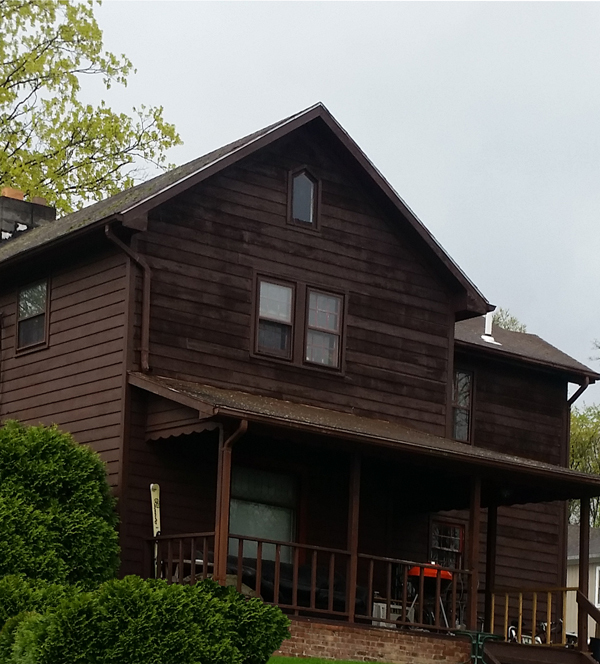 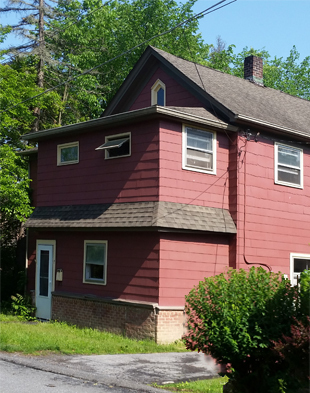 Jacob was in charge of building at least five new houses in the 1890s and possibly more that either no longer exist or were moved. In 1892-93, Jacob built a dwelling for Margaret Hasbrouck Clow and her siblings, the adult children of John Hasbrouck mentioned earlier. Jacob also built a residence in 1893 for Abraham J. DuBois on Church Street. The following year, Jacob was in charge of putting up a house for Anna Banks, another black woman. A white builder, Daniel Kniffen, raised the walls on the house.  By then Jacob, in his mid-60s, suffered from rheumatism and failing eyesight, so it is no surprise he might have needed some help with the more physically demanding stages of construction. The Banks house, which still stands at 6 Broadhead Avenue, is owned and cared for by Historic Huguenot Street. (The semi-circular attic window is a later alteration of a rectangular window.)[7] 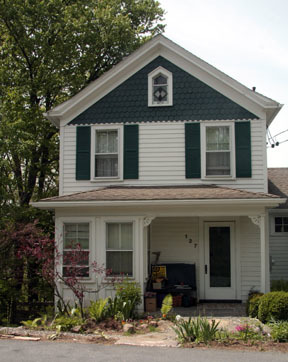 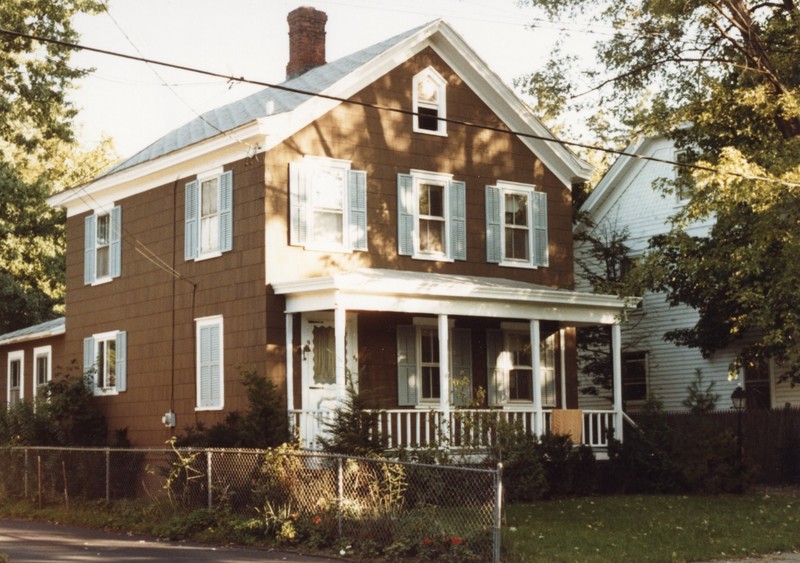 Around this time, the Wynkoop brothers named the street in front of their own homes “Mulberry,” and Jacob is said to have created the original plat for it. In addition, in 1894 the two men started building a rental property on the land their mother had purchased back in 1840. The New Paltz Independent made much of this project, reporting that George W. Keyser laid up the foundation walls in November, and the following month noting that the new house would be “gothic roofed” (referring to the front-facing gable) and its location “a sightly one.” Come spring, the Independent reported that Jacob was “putting the siding on his new house on Church Street and John Wynkoop has been grading down the slate rock on the street in front of the house. There is a very fine view from the house,” the newspaper confirmed.[8]

In the fall of 1895 they were still working on the dwelling, Jacob continuing the carpentry work and John busy with painting. At last, in January 1896, the Independent reported that the new house was “in a very pleasant location,” remarking yet again on the “fine view of the Wallkill Valley and mountains.” Besides the view, the paper went on, the new building “has plenty of room, being finished to the roof. It is to-let.” Jacob and John, approaching 70 years old, were most likely looking to ensure a stable future income by renting the house. The property was eventually rented to Mrs. Frances X. Betz of Sylvan Lake, Dutchess County.[9] 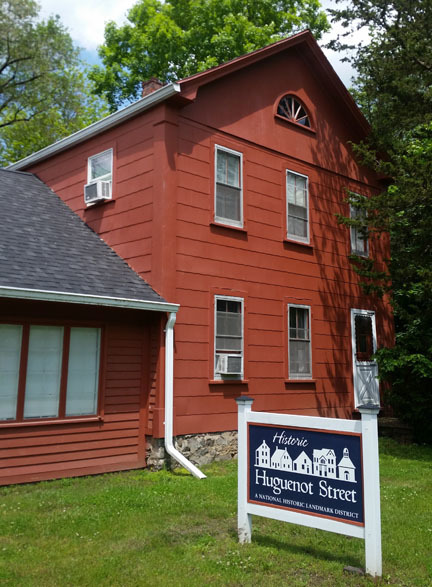 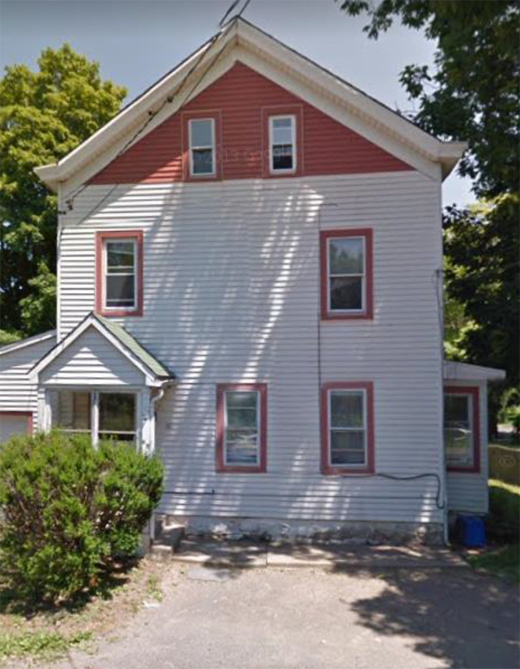 A photograph from the early 1880s looks down what became Broadhead Avenue toward Huguenot Street, approximating the view of the property at 66 Church Street. The house to the right is situated on the present location of the Salvation Army, North Chestnut Street. Photograph from of the Historic Huguenot Street Archives.