On January 10, 1850, Jacob Wynkoop, then age 20, married Diana Rose at “Tuthill,” in what is now Gardiner, New York (Tuthill is now known as Tuthilltown). It may have been a few years before the couple would live together steadily, however. In the federal census taken later that year, Jacob is living with his mother Jane and his brother John (father Thomas is not listed and perhaps died prior to that time).  The same census reports “Dianna Wyncoop,” age 23, living as a servant in the household of the local postmaster Abraham A. Deyo, Jr., and family in the original stone Deyo homestead on Huguenot Street. As mentioned earlier, it was not unusual for African Americans to live away from their own families to live and work as servants in the homes of white people. The 1850 census reveals a number of Black women living in predominantly white households.[1]

Detail from the 1850 United States Federal Census showing Jacob living with his mother Jane and brother John. Courtesy of the National Archives and Records Administration. Full document published by Ancestry.com.

Detail from the 1850 United States Federal Census showing Diana living in the household of Abraham Deyo on Huguenot Street. Courtesy of the National Archives and Records Administration. Full document published by Ancestry.com.

In 1851, Jacob purchased roughly half an acre of land for $65 (the equivalent of $2,150 in 2020) from Maria DuBois. The location of the property was north of his mother’s home on what is now the corner of Mulberry and Church Streets. Cyrus Freer, a white man and friend of the Wynkoops who recorded local stories, wrote that Jacob built a house for himself in 1852. Indeed, in the 1855 state census, Jacob and wife Diana had their own home and were blessed with a two-year-old daughter named Jane. Jacob’s occupation was listed as carpenter. His grandmother Isabella, now widowed, lived with them. John still lived with their mother Jane, age 50, also widowed, and listed as head of the household.  Jacob’s house was valued at $150 and Jane’s at $100. Both Wynkoop houses were described in the census as “framed” rather than “stone.”[2]

Detail of the 1855 New York State Census for the Wynkoops. Courtesy of the National Archives and Records Administration. Full document published by Ancestry.com.

The house that Jacob built for his family was demolished in the mid-1990s, but photographs of it from a decade earlier exist.  One image, taken by architectural historian William B. Rhoads, shows that the main portion of the house was symmetrically composed, one-and-a-half stories with very short, second-story windows in a frieze (broad horizontal band) just under the roof. The house was a modest three-bay version of the vernacular Greek Revival style common in the area in the 1850s (a two-story addition was added later). Period examples of larger vernacular Greek Revival homes are still found in and around New Paltz.[3] 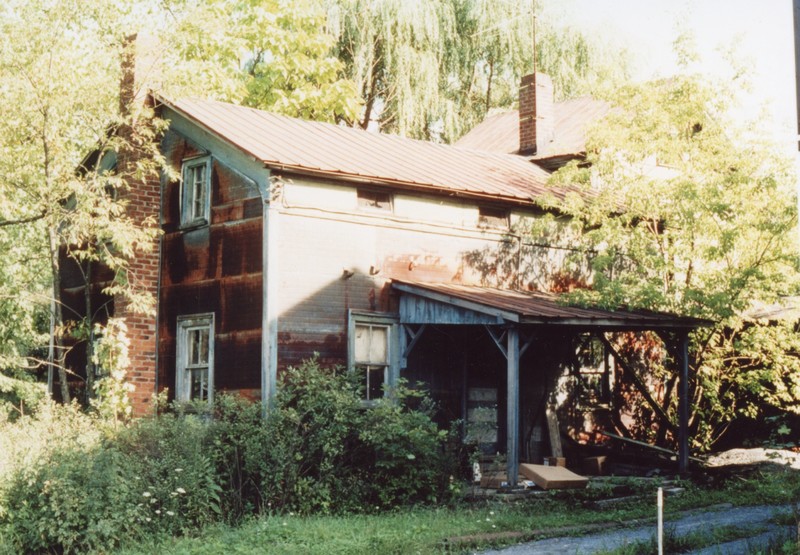 Jacob Wynkoop House, 17 Mulberry Street, built 1852. Demolished ca. 1994. Photo by William B. Rhoads in early 1980s. This view shows the original house with the porch facing west toward the mountain view. Located on the southwest corner of Church and Mulberry, it was the first house built in that area.

Land records from 1855 reveal that Jacob, his wife Diana, and another woman, Clarissa Tuthill, purchased the neighboring property. The deed also mentioned John Wynkoop, but he is not a buyer. According to Freer, around this time Jacob built a house for John; the 1860 Census listed John as head of the household, joined by his mother and grandmother.[4]