On February 4, 1850, Julia noticed several women seated across from her on the omnibus hysterical sobbing. She was later to hear of the horrible tragedy that had just occurred.

MORE THAN A HUNDRED PERSONS BURIED IN THE RUINS OF A BUILDING !!

"An awful explosion occurred here this forenoon, the full particulars of which at the present writing it is impossible to give. The accident occurred at half past 7, A.M., by the bursting of a boiler of two hundred horse power, in the Printing Press and Machine shop of MR. A. V. TAYLOR, No. 3, Hague Street, within a door or two of Pearl Street.

As soon as the explosion took place, the whole building, which was five stories high, was actually lifted from its foundation to a height of six feet; and when it reached that elevation, it tumbled down, crushing amid the ruins a great many people. The exact number we have not yet been able to ascertain. So great was the force of the explosion that fragments of the building were scattered in every direction. Windows in the neighborhood were broken, and a large portion of the front wall of the building was thrown with tremendous force into the houses opposite.

Various opinions are afloat in regard to the cause of the explosion, but the most generally received opinion is, that the boiler was imperfect. The proprietors state that it was a new boiler, and that the frost last night caused it to explode when it was fired up this morning. As nearly as can be ascertained, there were a hundred or more persons at the time of the catastrophe scattered through the machine-shop and pattern factory, as well as a bindery, in which a great many men and girls were usually employed.

The number of persons killed, it is difficult to estimate. WM. MERRILL, of Hose Co. No. 14, was killed. He was dreadfully mangled, his features being scarcely recognizable. S. JESSUP, Assistant Engineer, was badly injured.

Amid the confusion which prevailed, cries of the wounded and the wailing of the relations of those who were known to have been in the building at the time, the noise of the friends of the workmen, and the dust, smoke and excitement which prevailed, we found it impossible to get anything like a connected account of the awful catastrophe."

WM. CRIPPER, the chief engineer in the machine-shop, has not been heard of since the explosion, up to this hour. At 11 o'clock we visited the 18th Ward station house, and found several persons there in cots who had been severely, but it it hopely not mortally injured. Among them there were CHAS DOUGHERTY, JOHN THOMPSON, of Engine No. 19, and a boy named FLOOD. Seven persons who were taken out of the ruins were removed to the Hospital.

In the machine shop and pattern shop together, there were usually about 130 hands employed. Probably there were from 100 to 120 men and boys present at the time of the explosion. Up to 12 o'clock about 30 had been taken out, so that there must be some 60 or 70 persons still. There were at 12 o'clock a number of voices still heard under the ruins. Their cries before noon were most piteous. It is feared that a large majority of those under the ruins are either crushed to death or drowned from the immense quantity of water poured in. Several who were taken out were dripping wet, and shivering fearfully with cold. A little boy stated that there were others beyond him when he was taken out. A large number of workmen are engaged in search of those still buried under the ruins." 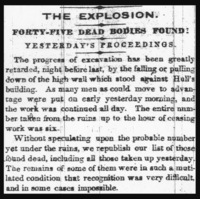 FURTHER PARTICULARS OF THE EXPLOSION IN NEW YORK.

"Up to the present time there have been 25 dead bodies removed from the scene of the explosion. Some of them present the most awful appearence we ever witnessed. A number have been recognized, but some are so badly burnt that it is impossible to recognize them. Women and children are flocking around the station house to see if they can find any trace of their absdent husbands and fathers, uttering the most piercing and heart-rending cries. The scene is truly a solemn and affecting one. The utmost activety prevails in removing the rubbish; and mayor Woodhull has given orders not to have the work stopped for a moment, but to prosecute it vigorously, setting new hands to work as soon as those engaged are exhausted. A little boy named SAM FINDALE, who was under the ruins 33 hours, was taken out this morning, but died in a few hours afterward. Now that the ruins are being cleared rapidly and the attentions and energies of the firemen, which were before concentrated on the poor boy FINDALE, are directed to the digging up of the ruins with pick-axes and crow-bars, bodies are being removed every fifteen minutes, and it is hoped that a great number will be taken out before night. With the exception of FINDALE, none were recovered alive since three o'clock yesterday, when WILLIAM MERRITT was recovered. Had the rest been ever so well ________, they must have been frozen to death by last night's frost. There were some women passing the front of the building at the time of the explosion and these it is expected will be shortly exhumed." 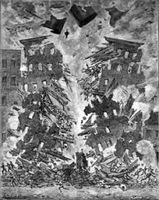 The Hague Street Boiler Blow-up rates among the top ten catastrophies in the history of New York City. The following excerpt is taken from listverse.com: "On February 4, 1850, just after work had begun for the day at 8:20 AM, an explosion rocked the press room and machine shops of A. B. Taylor & Co., hat manufacturing building on Hague Street, New York City. The boiler in the press room and machine shop had exploded. Over one hundred people employed by Taylor & Co. hatters were at work. Witnesses claimed the explosion lifted the building off its foundation and it collapsed into a pile of rubble, trapping those inside.

Firemen responding to the scene had to dig to try to find survivors, including many young boys. One boy was buried in the rubble for 33 hours before finally being rescued, but he died a short time later. In total, sixty-three people were killed, while about seventy were injured. The cause of the explosion was attributed to the boilers – which were still relatively new pieces of equipment in 1850, and prone to disastrous explosions. The owners claimed it was a new boiler but others stated the boiler was an old one, taken from a ship and patched together."