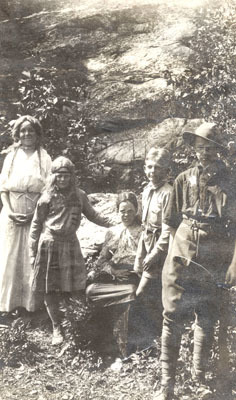 On Water Sports Night, a play was performed before the visiting parents in the picturesque outdoor theater known as the “Play Rocks.” Every camper took part in a carefully planned play that was written, coached, and directed by one of the counselors. The first play performed at Camp Awosting was the 1906 American and English drama rendition of Thomas J. William's 1866, “Pipkin's Rustic Retreat: A Farce in One Act.” Many later plays were rooted in the Native American colonial period. These Native American themed plays, such as their rendition of “Little Big Horn” (1923) and “A Romance of the Shawangunks” (1924), called for the boys to dress up and depict Native Americans, a task that the boys enthusiastically embraced. The plays typically changed from year-to-year, although, “The Massacre of Fantine Kill,” a camp favorite, was presented again in subsequent years after it first appeared in 1910.

The historical narrative of “The Massacre of Fantine Kill,” presented the camp's portrayal of the events that unfolded on October 12, 1779 at Fantine Kill, located on the northern frontier of Lake Awosting in what is now Ellenville, New York. The story depicted the eighteenth century massacre of the settlers in the nearby town. The Ki-Awostings, a neighboring tribe, had maintained friendly relations with the Bevier family. After Red Wing, the son of Chief Grey Eagle of the Ki-Awosting tribe, was killed at the hands of a "pale face," the Napanoch and Shawangunk tribes persuaded Grey Eagle to launch an attack against the settlers. The latter tribes allied themselves with a Tory captain who made great promises if they rose against the colonists. Incited by the death of his son and the "fiery speeches" given by the chiefs of the Napanoch and Shawangunk tribes, Grey Eagle conceded and joined in the attack against the Beviers. Every settler but the daughter of Mr. Bevier, Nellie, was killed in the attack; she was spared by her alleged Native American lover, Little Deer. 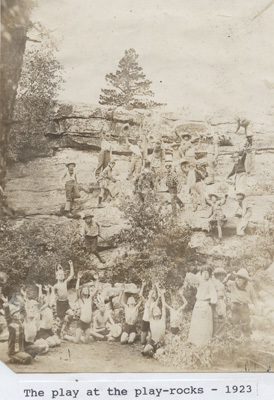