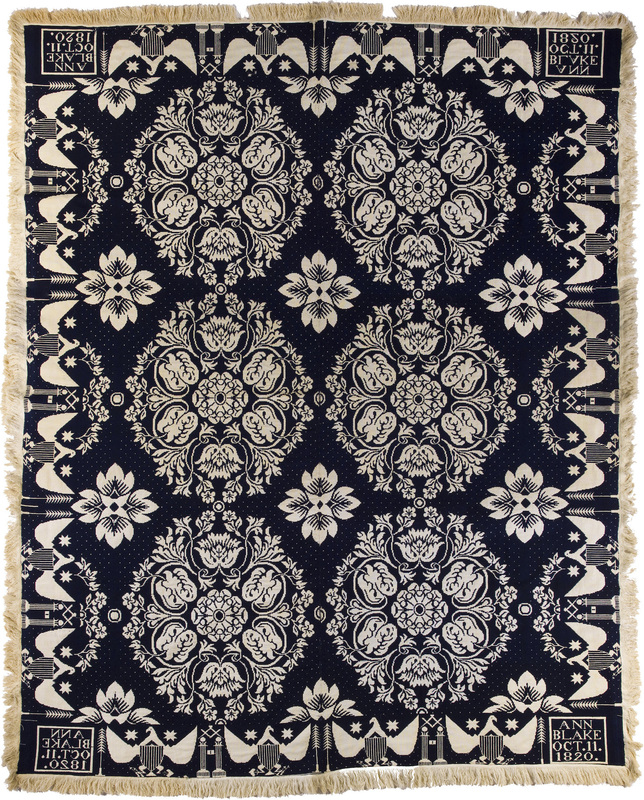 An important New York State coverlet weaver, James Alexander (1770-1870) was born in Belfast, Ireland of Scottish parents. Already a skilled trade weaver when he came to America in 1789, Alexander eventually moved to Little Britain (Orange County), N.Y. where he farmed and set up a workshop employing several weavers. Alexander kept a very complete accounting of his expenditures and receipts along with the names of almost all of his clients. These account books form the basis of our understanding of Alexander’s weaving business and the products coming from his workshop. Based on similarities in central medallion designs, it is extremely easy to see why the Agriculture group of coverlets has been confused with Alexander’s output. However, important differences exist. Alexander always put his client’s name into a framed corner block, while client names are on the end borders on the Agriculture coverlets. Alexander used a sprigged, leaf motif in the arch above his eagles, while Agriculture coverlets used shamrocks. Additionally, twin pine trees were always used on Alexander's borders. Coverlets attributed to him were woven in two parts and sewn together, leaving a seam down the middle.

HSS Permanent Collection, Gift of Annette Innis Young. This receipt documents the transaction between John Alexander and C. Reeve and Co. for the weaving and finishing of three coverlets for a total of $16.00. John Alexander was a business partner with his brother James Alexander.

James Alexander retired from weaving sometime around 1828 (the last year entries are made in his account books) and resumed his life as a farmer. Alexander died just short of his 100th birthday. He is buried in Newburgh, N.Y.