The Diadem of Stars and Charles Dalton

Ruth Lynda Deyo’s fascination with Egypt truly defined the latter half of her life. While there, Ruth met Charles Dalton from England and they married in 1932. Charles was born in 1877 in Manchester, England to a middle-class family. Prior to meeting and marrying Ruth, Charles had served in World War I in the British Army and was a trained secretary and typist, in addition to being a chamber musician and solo violinist.[8]

Ruth and Charles made Egypt their home. The rich culture inspired Ruth to write, in collaboration with Charles, her grand opera entitled The Diadem of Stars.[9] The opera is in three acts, and the score over seven hundred pages. Ruth called it a “Music Drama.” The work is based around Egyptian superhuman characters based on historic figures, with an overarching theme of achieving global peace. Within the plot, heretic king Pharaoh Akhenaten attempts to overthrow an old religious order to institute monotheism and worship of a single sun god. The pharaoh’s daughter marries Tutankhamen, who eventually restores a peaceful order at the death of Akhenaten.[10] The plot of the opera mirrors the uncertainty of the interwar period of the 1920s and 1930s, as Ruth and Charles saw the coming of the second world war. The couple wrote several pieces related to the opera. Dramatic Poem: The Diadem of Stars is a 162 page volume that digs into Egyptian historical commentary and context. Charles also wrote about the political and religious implications of their work.[11] Ruth spent the second half of her life dedicated to promoting her opera, constantly working to secure funding for its production in hopes that it would run long term. As Ruth chronicles in her diaries and correspondences to family members, portions of the opera were performed for various audiences.  However, a full production never came to fruition. 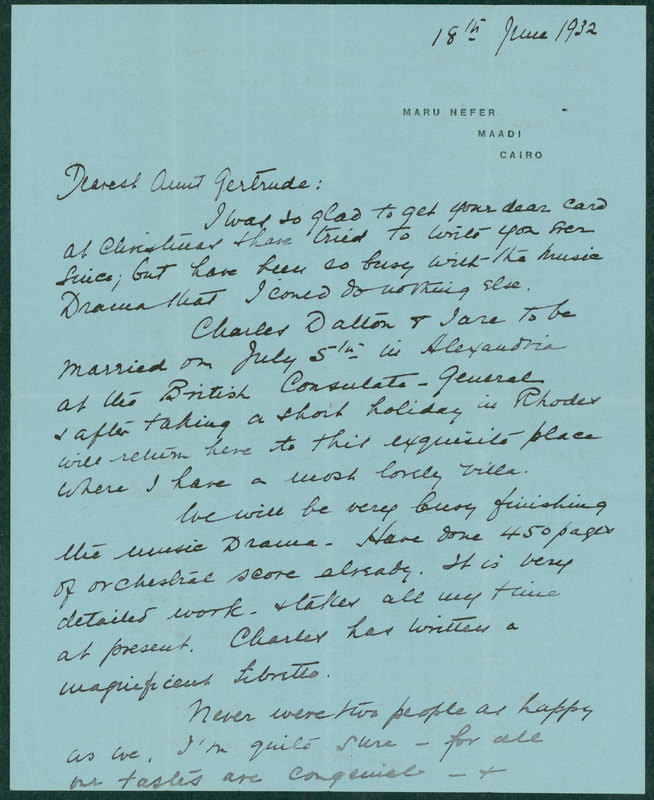 Letter from Ruth to Aunt Gertrude Elting Deyo dated June 18, 1932 announcing that Ruth and Charles will be married on July 5th in Alexandria at the British Consulate General. Ruth talks about finishing the music drama and investors in it. She mentions brother Morton and his family. Ruth described her home in Egypt as â€œheaven to us both".