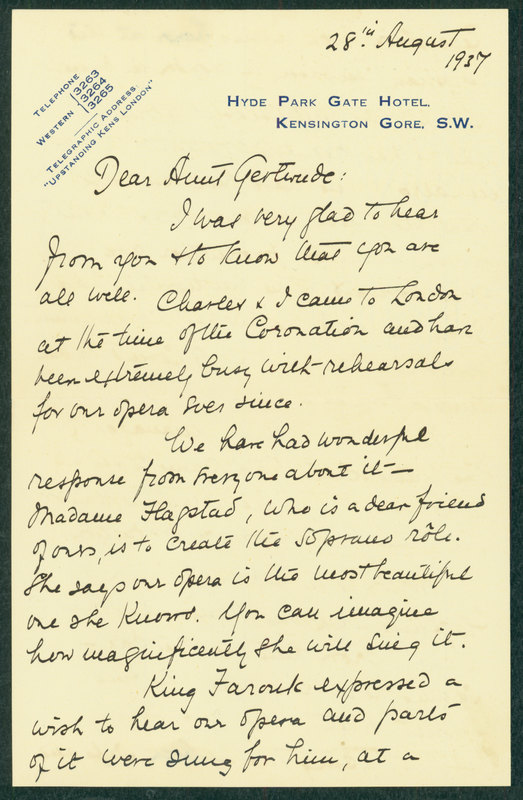 Letter dated August 28, 1937: Ruth writes to Aunt Gertrude from the Hyde Park Gate Hotel in London.Â  Ruth and Charles traveled to London to promote and fundraise for The Diadem of Stars. Ruth talks about meeting the manager of the Metropolitan Opera to plan New York production of the Opera. She also mentions that Morton is in Shanghai. The letter is incomplete. Click image for details and more information

Ruth was born in Poughkeepsie and descends from the New Paltz Deyo, DuBois, and Elting families. Her parents Peter Deyo and Ida Florence Woolsey Deyo, both born and raised in New Paltz, were held in high esteem by family, friends, and the communities in which they lived. Ruth kept various newspaper clippings, one describing her parents as “leaders of society in New Paltz--admired, esteemed, and universally loved.”[12] Peter was a banker through his life, including the Huguenot National Bank, the Poughkeepsie National Bank, and the Douglas County Bank in Wisconsin. He returned to New York as a bank examiner and became Secretary of the New York State Board of Tax Commissioners.[13] Ida passed away from stroke, heart, and brain complications when Ruth was only twelve. Even so, she inspired her daughter’s love of music; Ida was described as “the life of the social circle and the favorite performer at entertainments in the old [New Paltz] Academy days.”[14] 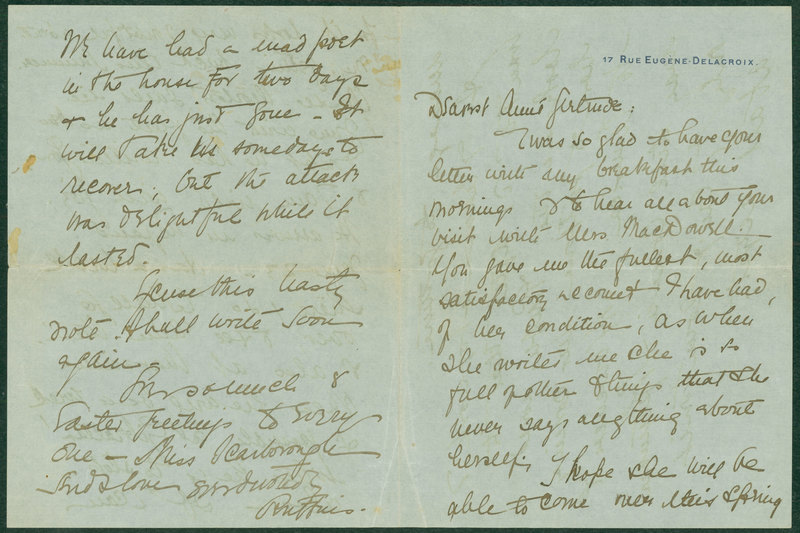 Undated letter from Ruth responding to a letter from Aunt Gertrude. She reports that her brother Morton has a break in England, and she plans to meet him and spend time there. Click image for details and more information.

Ruth’s younger brother Morton Lyndholm Deyo was a successful and revered Admiral in the U.S. Navy. After Ruth’s death, he protected a vast archive that is now the Ruth Lynda Deyo Dalton Collection. He and his daughter, Mrs. Lila Deyo Garnett, organized and cared for the collection, eventually donating it to Wheaton College, where it has been exhibited and extensively researched.[15] “Delicacy, Grace, & A Degree of Virtuosity,” Ruth Lynda Deyo highlights items in the Historic Huguenot Street Permanent Collection, including letters, cards, and performance brochures. Most letters are written from Ruth to her aunt Gertrude Elting Deyo (1865-1953), who lived in the DuBois Fort on Huguenot Street.[16]