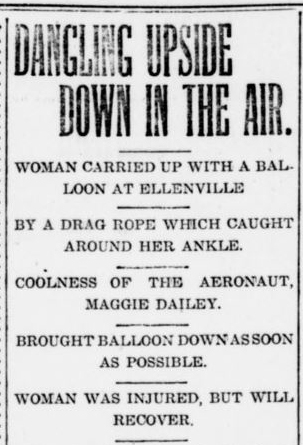 Headline from The Kingston Daily Freeman, August 30, 1906.  To read the full article, click on the image. 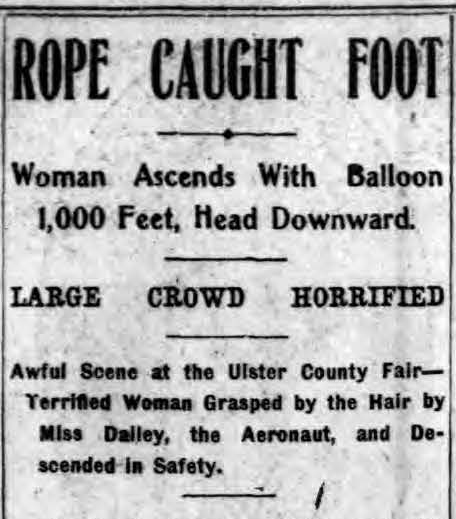 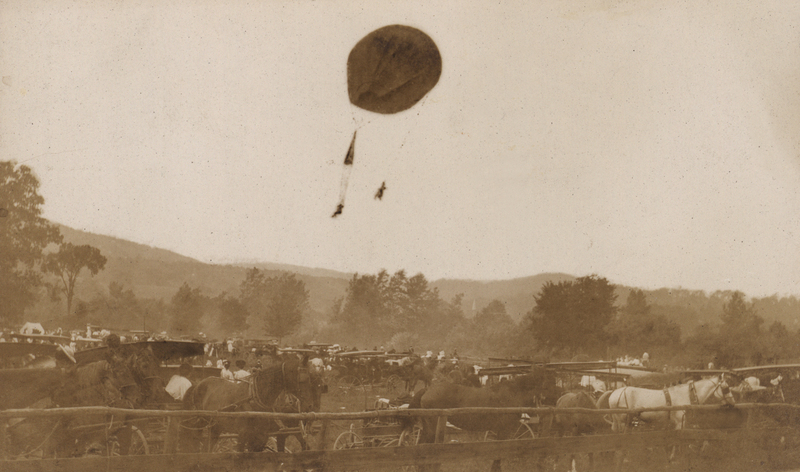 Newspapers far and wide carried the story of the dangling woman, caught in a rope by an ascending balloon on August 29, 1906, including exaggerations of the crowd to as many as 10,000 and the baloon height to as far as 1000 feet above the ground.  Stories conflict as to whether the crowd was horrified by the accident or, as reported in The Kingston Daily Freeman:  "Nobody fainted.  Nobody groaned.  Nobody was horrified.  The thrilling sight failed to thrill for the reason that everybody thought it was part of the show."  Perhaps the truth was that some thought it part of the show, and others realized it was a terrible mishap.  In any event, the aeornaut Maggie Dailey was able to break the fall of Mrs. Roper so that she was not seriously hurt.  In 1908, after suing for $25,000 in damages, Mary S. Roper was awarded $1,000 by a jury according to the Honesdale, Pennsylvania, Citizen, December 23, 1908.  The postcard photo above shows Maggie Dailey on her trapeze, with Mrs. Roper dangling by her right foot from the balloon.

At the same time of day as the balloon incident, around 3:00 p.m. Wednesday, the Floral Parade was continuing in its annual splendor.  Below are some images from the 1906 parade. 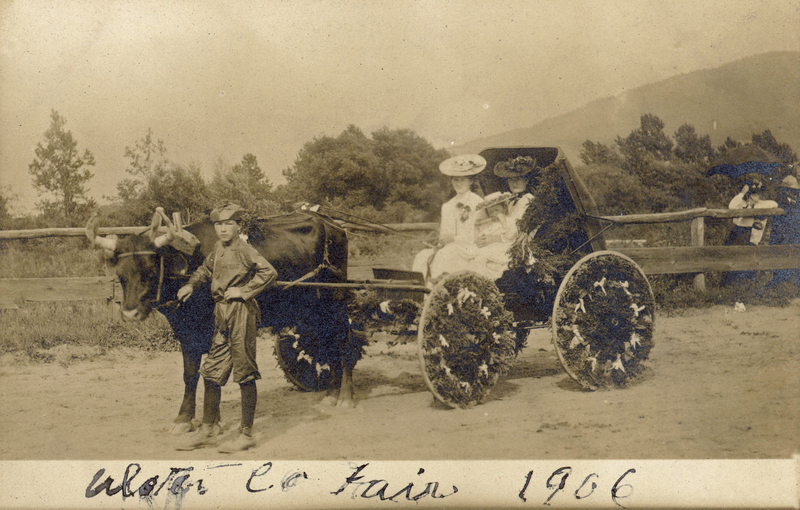 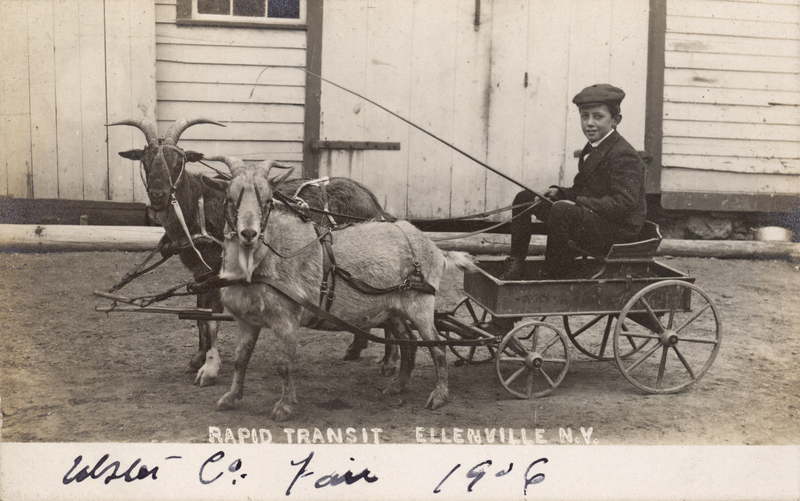 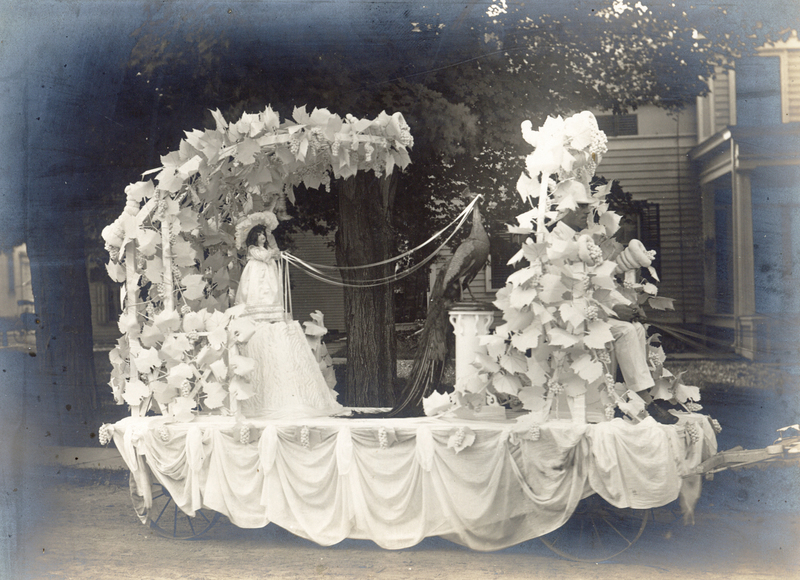 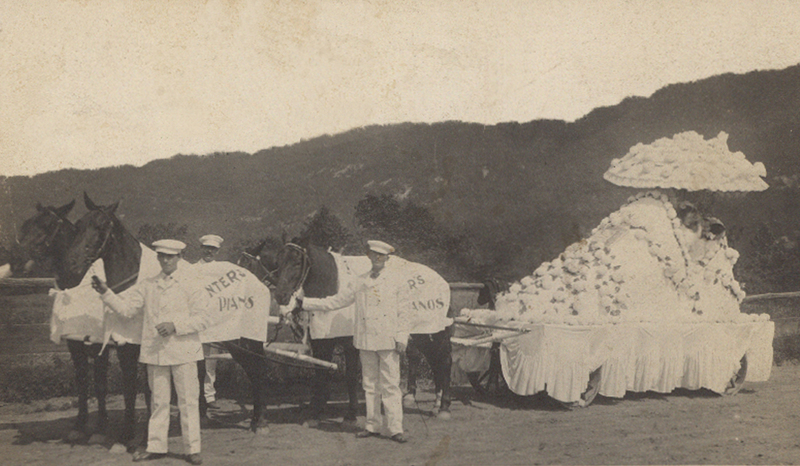 "Four-horse business float -- E. Winter and W. H. Rider were so nearly even that the committee could not decide, and there being no other entries, gave each first prize.  Mr. Rider's float, decorated in white bore a peacock driven by a life-size doll.  Mr. Winter's float bore a monstrous slipper in pink and white.  Inside the slipper were several children."  (The Kingston Daily Freeman, August 30, 1906) 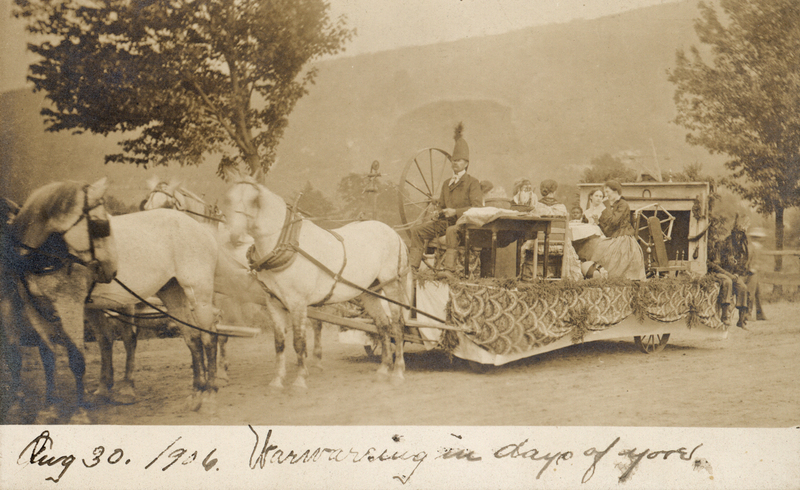 "Four-horse antique float -- Miss Bevier.  The float represented a Wawarsing home in the times gone by.  Spinning wheel and reel were in operation, and the head of the family loaded a Tower Hill musket.  Outside crouched an Indian.  Everett Fowler, wo acted as official announcer, said: 'This float represents this part of the country in the olden times.  These young ladies are direct descedants of some of the first settlers of Wawarsing.  Nearly every article on this float was used from fifty to over two hundred years ago by the families here represented.  The driver wears the hat which was worn by his great-great uncle, Gen. Benjamin Bevier, who served as a colonel in the Revolutionary war and war of 1812.  He was afterward promoted to general, and died in 1822.  The families represented are Bevier, Van Wagenen, Vernooy, DeWitt, Russell, Demarest, McKnight, Stahl, Jansen, Elmendorf, LeFevre and Eltinge.'"  (The Kingston Daily Freeman, August 30, 1906) 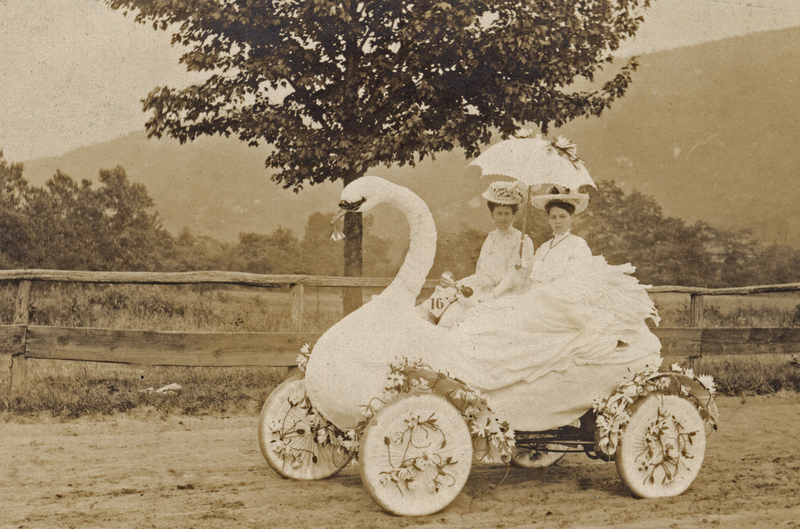 "Automobile -- Fred Davis.  This was one of the features of the fair.  A runabout automobile had been transformed, so far as appearance was concerned, into a mammoth white swan."  (The Kingston Daily Freeman, August 30, 1906)