Hendrick Aupaumut was born in 1757 at Stockbridge, Massachusetts, in traditional Mohican territory on the Housatonic River, in a shared English-Mohican community. He was the son of a sachem who had led at the traditional central town of Pempotowwuthut (Place of the Council Fire, or Albany) on the Muhhekunnutuk (Waters that are Never Still, or the Hudson River). The Mohicans were displaced from their traditional center by settlers from the colony of New York and subsequently relocated much of the community to Stockbridge, under an agreement to share space and to create a planned Anglo-Mohican Christian community.  The Mohicans had begun to adopt aspects of Christianity, which they blended with their own culture and beliefs, while maintaining traditional governance and subsistence, in addition to colonial forms of agriculture.

During the American Revolution, Aupaumut served with the colonial forces in the American Revolution, and became Captain of a Stockbridge Mohican company during the war. The Mohicans lost many lives in the conflict. Aupaumut experienced dispossession and displacement of his community by American settlers in Stockbridge, gradually, over the course of the second half of eighteenth century. This was especially problematic after the Revolutionary War, when settlers wanted to claim the land as their own, even against their Mohican “brothers,” who had fought side-by-side with them. This also included an attempt to displace their traditional governance system with a colonial town leadership system and the breaking up and allotment of lands, versus Mohican commonly held lands.

Aupaumut spoke in council to the Americans at Newtown, New York after the Revolution, representing his nation, saying:

"I lost many lives in your defence: I stood by you in all your troubles…But I had no territory to fight for, nor had I to fight for liberty, for liberty I always possessed.  But friendship, pure friendship, induced me and my nation to join you.  But sometimes I feel sorrow, and shame, that some of my great brothers have forgotten me – that all my services and sufferings have been forgotten, and that I – my nation – remain neglected.  What are the reasons I cannot say.  Perhaps I am too small to be regarded.  My friendship however is strong: my friendship I do not forget." [Note that “I” here represents the collective Mohican nation, in traditional diplomatic language, not Aupaumut as an individual]

In response to this pressure on their lands and sovereignty, the Mohicans collectively migrated west to live on lands given to them by the Oneida nation, in the territory of the Haudenosaunee (Iroquois) Confederacy. The Mohicans lived at “New Stockbridge” in New York State alongside another group of Native migrants from southern New England, the Brothertown community, led by Samson Occom. Hendrick Aupaumut was among the Mohican leaders who led this journey, and he joined in friendship with Occom.

As a sachem, Aupaumut was instrumental to the community’s reconstruction in the wake of war and displacement. In the 1790s, he also served as an international diplomat, representing his nation in the Ohio River Valley, where the Mohicans had traditional relations with the Lenape, Shawnee, and other nations that were part of the United Indian Nations, a confederacy that sought to maintain a confederacy and territory independent of both the United States and British Canada. Aupaumut served as a crucial mediator between his American “brothers” and his Algonquian relations in the Ohio River Valley, composing several journals which recorded his journeys and the councils that took place between 1791and 1793. He also composed a narrative history of his nation, which was later published.

In later years, the elder Aupaumut helped to lead and negotiate another migration, under severe land pressures by the state of New York, its settlers, and land companies, to Menominee territory in Wisconsin, where the nation continues today. During this time, he and other Mohican leaders composed a petition that asked the state of New York to “buy a part of their dish” and “keep the other part for the use of those who remained in the State, —and keep away their people from it.” He also wrote to then president Thomas Jefferson to ensure that they would be compensated for the lands they lost.

Aupaumut was a fierce advocate for protecting the land and believed that securing clear title to the land, recognized by the colonial government, was the best route for Native people to ensure that their indigenous rights were protected. Aupaumut died in 1830 on the Mohicans’ new land in Wisconsin. 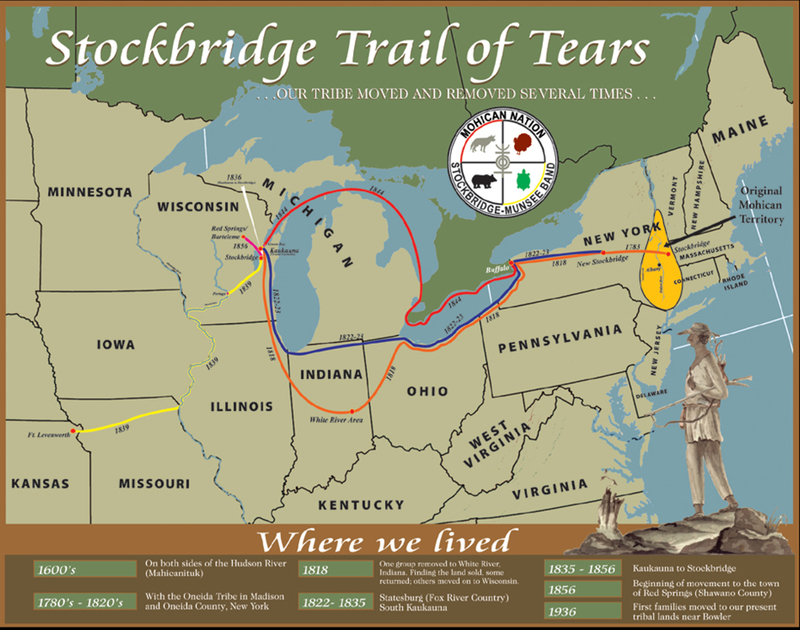 Stockbridge Trail of Tears (map). Courtesy of the Stockbridge-Munsee Community.