Nicholas Roosevelt (b. 1767) was a distant cousin of both Presidents Theodore Roosevelt and Franklin Delano Roosevelt. Nevertheless, FDR counted him as one of the most significant of Roosevelts. Nicholas was not as much a man of means as were other relatives but rather an inventor and businessman who played a pivotal role in the development of the steamboat.

In 1794 Nicholas rediscovered his boyhood interest in steam engines and opened his Soho plant to develop them. He earned a reputation for being knowledgeable in this burgeoning industry, and was contacted in 1797 by Robert Livingston who held the promise of a twenty-year Hudson River monopoly if he could produce, in time frame of one year, a steamboat capable of moving upriver at a speed of four miles an hour. Livingston needed Nicholas's expertise to construct such a boat. In the end, however, Livingston refused to consider Nicholas's critiques and suggestion of two paddle wheels dropped over the sides of the boat. Livingston did not meet his deadline, and the two men parted ways. 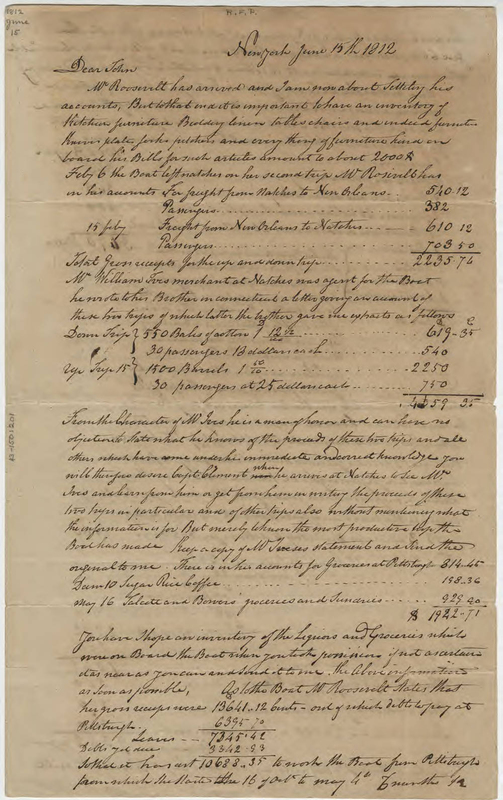 Shortly thereafter, Robert Livingston was named minister to France where he met Robert Fulton. At the time, Fulton was trying to interest the French in a submarine he had successfully built. When the French declined to continue backing Fulton’s design, Livingston convinced Fulton to return to the United States to perfect a steamboat.

When Fulton’s steamboat became the first to successfully navigate the Hudson River, Nicholas could not help noticing that the boat had two wheels lowered over the side as he had once suggested to Livingston. Evidently, Livingston dictated the idea to Fulton without telling him of the design’s originator. The Roosevelt family has proudly maintained that Nicholas was the true inventor of the steamboat. In actuality, there were many inventors working simultaneously to develop steamboat designs and methods of operation, many of them moderately successful. Fulton, however, became the first to experience complete success and claimed the subsequent patent for its design in 1809.

Nicholas Roosevelt was not completely crushed by the loss of the resulting notoriety and wealth because he financially partnered with both Livingston and Fulton for the first voyage of a steamboat (the New Orleans) down the Mississippi River. While plans for the New Orleans were moving forward in Plattsburgh, New York, Nicholas and his wife embarked in flat boat down the Mississippi to prepare the way of the larger steamboat. Discovering natural coal deposits, Nicholas had coal gathered and left on the bank of the river for later use by the steamboat. Nicholas also skillfully charted lurking dangers in the Mississippi River.

The steamboat successfully arrived in the estuary of the Mississippi and further sealed Nicholas Roosevelt in the high esteem of the Roosevelts who followed.