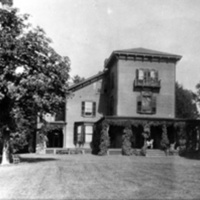 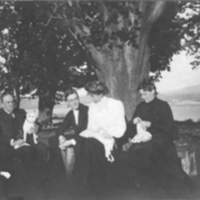 The first of Franklin Delano Roosevelt’s ancestors to venture further upriver into the Hudson Valley was Nicholas Roosevelt (b. 1658). In the frontier town of Esopus, today Kingston, Nicholas trapped for furs and traded with the Native Americans. His stay was only temporary, however, for trapping was the means by which he saved money to start his grain mill in New Amsterdam, later New York City.

The next of the Roosevelts to venture up river was Isaac "the Patriot" who came to claim his bride at the altar of the Dutch Reformed Church in Rhinebeck. Although he based his sugar refining business in New York City, Isaac was the first of the Roosevelts to find a love of upstate New York. In the throes of the American Revolution Isaac settled his family into the safer country atmosphere away from the New York harbor teeming with British ships. He traveled among the cities of Kingston, Fishkill, Poughkeepsie, and Albany to attend Congressional and later Constitutional meetings.

James Roosevelt, son of Isaac, became the first to construct his own Hudson River country residence. In 1818 he built Mount Hope, located on the east side of the Albany Post Road in Poughkeepsie. James' son, Isaac Roosevelt II, was the first of the Roosevelts to reside permanently in the country.

Isaac lived at his father's Mount Hope estate tending the gardens, studying herbs, and generally enjoying a quiet, isolated life. After several years of marriage to Mary Rebecca Aspinwall, he moved into his own estate. Isaac built the Rosedale estate within the town of Hyde Park in 1832, so beginning the Roosevelt legacy within the Hyde Park community. When his father died, Isaac inherited Mount Hope allowing him to bequeath a house to each of his sons.

James Roosevelt II, son of Isaac II, inherited Mount Hope and resided there with his first wife, Rebecca Howland. In 1865 the Poughkeepsie property tragically burned while the couple was touring in Europe. They lost virtually all of their papers and belongings. James chose to sell the property to the State of New York for the construction of the Hudson River State Hospital, a psychiatric center. After a new hospital facility was built on the Mount Hope grounds, James served on the hospital’s Board of Directors.

James became the second Roosevelt to select Hyde Park as the site of his home, and in 1867 built Springwood. The beautiful farm was constructed on the banks of the Hudson River, the lawn opening to an expansive view of the river. Parcels of land were bought and added through the years until James maintained 750 acres of hills, fields, and forest. It was here that his son, the future President Franklin Delano Roosevelt, was born in 1882.

The devotion of the Roosevelt men to the beautiful Hudson River valley is evident in their continual choices to settle in the region. FDR's own love of the land was further cemented by the Delano family's relationship with the river. Warren Delano selected the Hudson River property upon which he built Algonac because he wanted his children to run freely outdoors while he was in China.

When James Roosevelt and Sarah Delano were united in marriage, two of the most beautiful estates along the River became the playground of their child, Franklin Delano Roosevelt. FDR had a lifelong passion for his Hyde Park home, the surrounding area, and its community members.

FDR always returned to his Hyde Park home to remember his ancestors and their contributions to the Hudson River Valley, whether physically or in his imagination. Thanks to his passion for preserving regional and family history, future generations can now hear the tales of hundreds of years of Hudson Valley history as seen through the lens of the Roosevelt family.