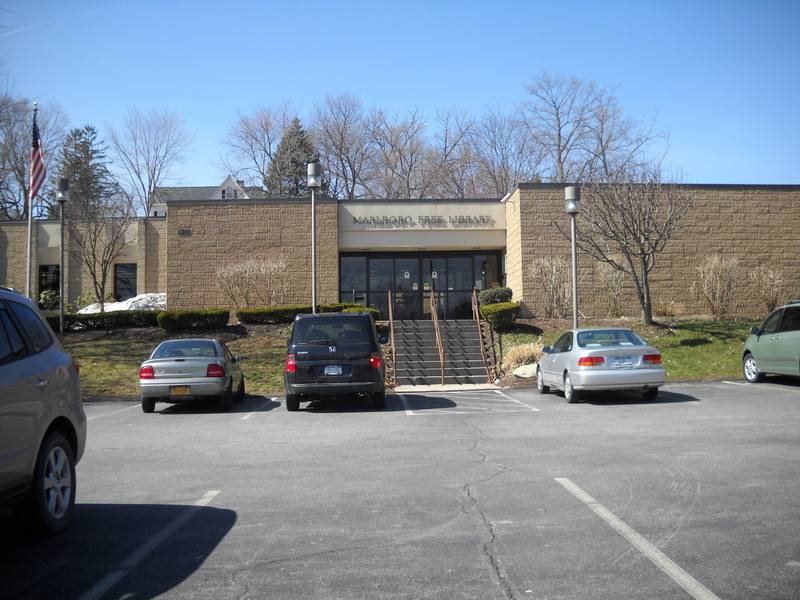 History of the Marlboro Free Library:

•1911 The Marlboro Free Library was granted a provisional charter by the Board of Regents of the State of New York on December 9th.

•1912 Library begins service in a school located at the corner of Grand and Church Streets.

•1913 Certificate of Registration issued by the State of New York on Feb. 20th showed that the Library had met certain standards and was eligible to receive tax monies.

•1915 Fire completely destroyed the Methodist Church forcing the Library to return to the school on the corner of Grand and Church Streets. Library received its absolute charter on Dec. 2nd.

•1916 The Library moved to a store location in the Village. (The Old King St. Library)

•1921 Money raised through the efforts of the Association purchased a site on the point of land where King Street and Route 9W meet and the doors of the new Library opened November 19th.

•1965 The constitution and by-laws were amended in April to include the entire town of Marlborough, and the area of Plattekill and the Town of Newburgh which life within the local school district.

•1970 Flossie Linsig retires as Librarian of the Marlborough Free Library after 20 years of service to the community. Citizens Committee is formed by the Board of Trustees to promote and plan for a new larger Library facility.

•1972 Library changed its status from an association to a school district public library by a vote of the taxpayers of the Marlboro Central School District on June 27th. And approved a budget in the amount of $21,058.21. An organizational meeting of the newly created school district library (hereinafter to be called the Marlboro Free Library) was held on July 13th. The Board of Regents of the State of New York issued a Provisional Charter to the Marlboro Free Library on September 28th.

•1977 Board of Trustees contracts with Milton Chazen Associates to design a new library of 3600 square feet to be built on the property on the corner of Route 9W and Bloom Street, which was donated to the Marlboro Free Library specifically for construction of a new library. Bids for construction of a new library and sale of the King Street building were published in the Southern Ulster Pioneer and The Evening News on May 11th. Bids were opened on May 27th and contracts awarded on July 11, 1977. Mr. John Alessi was the successful bidder for the King Street library.

•1978 May 21st marked the dedication of the library building on the corner of Route 9W and Bloom Street.

•1986 Peter R. Hoffmann of Hudson Bluff Drive, Marlboro, New York was hired as architect of record to develop plans for an expansion of the library building on Route 9W and Bloom Street. Monies to construct the new addition were received from: Power Authority of the State of NY-$28,310.00. Federal LSCA Title II Funds-$89,753.00. NYS Public Library Construction Funds-$29, 750.00. Marlboro Free Library Building Fund-$158,615.25. The positive vote of school district taxpayers on December 18th assured funds in the amount of $249,000.00 for the library building expansion completion.

•1988 Dedication ceremonies for the Marlboro Free Library addition take place exactly 10 years to the day from the original dedication on the site, May 21st.

•1991 Plastic barcoded FASTCARDS were issued to all Marlboro Free Library patrons beginning March 1st of this year. This card replaces all cards including Universal Borrower Cards and will be used at any library in the Mid-Hudson Library System. Automated circulation began at the Marlboro Free Library on Wednesday, June 12th. The Marlboro Free Library was the recipient of a bequest from the estate of Alice Pierce Mills of Amherst, Erie County, New York to be used for the benefit of the Library.

•1993 The Library purchased adjacent property with the proceeds of the Mills Estate and a $50,000.00 LSCA (Library Services and Construction Act) Title II Grant from the State of NY. Formal bids for the construction of additional parking space, the conversion of dwellings existing on the property to storage purposes, and the installation of expanded and redesigned handicapped accessible entrances to the Library were opened on May 27, 1993, and awarded June 7, 1993. The Public Access Catalog component of the automated Circulation System became functional.

•1994 Access to technology for patrons was enhanced by the creation of a local area network providing multiple user access to software selections. Dedication of the West Street Parking Lot and adjacent property took place at special ceremonies held on Sunday, Nov. 13, 1994, the week after the Library’s 83rd birthday.

•1995 As a result of census information, the population the Library is charged to serve has increased from 10,398 to 10,613. Gifts from the Friends of the Marlboro Free Library made possible the purchase of exterior benched and outdoor building bulletin boards, and a gift from the Anita-Jean Dance Theatre purchased new bike racks for both entrances. In September, Custodian Mary DuBois was honored for her twenty years of service to the Library.

•1996 Available access to the Internet by the public became a Library service.

•1998 The Library was one of two public libraries in NY chosen by the American Library Association (ALA) to host a two-month showing of the travelling Exhibit-“Many Realms of King Arthur.” As the result of a legislative grant sponsored by Senator William Larking, the MFL received $8,215,86 toward future expansion. The MFL was awarded State Aid Construction Funds in the amount of $8,357,43 toward roof replacement.

A “Babies & Books” grant in the amount of $1,000.00 and $250.00 worth of print services, was received from the Mid-Hudson Library System for early childhood programming.

•2010 The MFL proposed budget for 2010-2011 in the amount of $815,948.00 was passed. In October, the MFL received a generous gift of $40,000.00 from the Beatrice Conover Foundation, Inc. Over the years, donations from the foundation have totaled $495,500.00, a sum that has allowed us to make improvements to the building and to purchase adjacent properties for our future expansion. Also in the fall, the library hosted a series of computer learning courses.

•2011 Three new collections are added to the Library: ebooks, videogames, and Easy Readers.

•The Library will be celebrating its 100th anniversary in December of 2011.